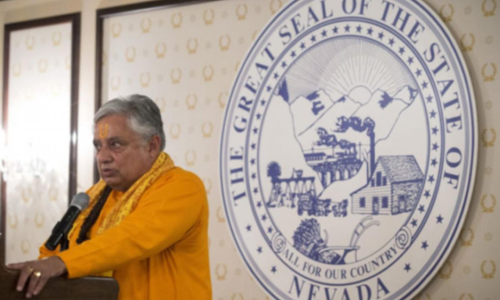 Arkansas State Capitol Arts and Grounds Commission appears to be still waiting for submission from Ten Commandments monument proponents before...

Responding to Hindu statesman Rajan Zed’s request for more information to Secretary of State Mark Martin, who is Commission Chairman; Chief Deputy Secretary of State Kelly Boyd wrote: No call for the Commission to meet is anticipated prior to receipt of what is considered to be all of the submissions. To state it more directly, we currently have legislation, but no submission by proponents for construction of a Ten Commandments monument. Since legislation is in place instructing us to comply with such a request, we naturally anticipate such a request and will await its submission prior to issuing any call.

Rajan Zed, in a statement in Nevada today, urged early Commission meeting to discuss various submissions received for erecting monuments/memorial/banner, including theirs for permission to erect a privately funded statue of Lord Hanuman; and decide the future course of action; so that they and other submitters of requests could start working towards fundraising, designing, construction, etc., of the monuments.

Replying to Zed’s query—How long the Commission can keep a monument request pending without making a decision? Is there any time limit?—Boyd replied: …there is no time limit. The last successful application to place a monument on the State Capitol Grounds required approximately 18 years to come to fruition, a period stretching over the administration of Secretaries of State Priest, Daniels, and Martin.

Hindus have sent a formal request to Martin for “permission to erect a privately funded statue of Lord Hanuman in Arkansas State Capitol grounds in Little Rock”, to be constructed, designed and paid for by private funds at no expense to the state. “If permitted, we plan to make it big and weather-proof. Lord Hanuman is greatly revered and worshipped in Hinduism”, Rajan Zed added in the request.