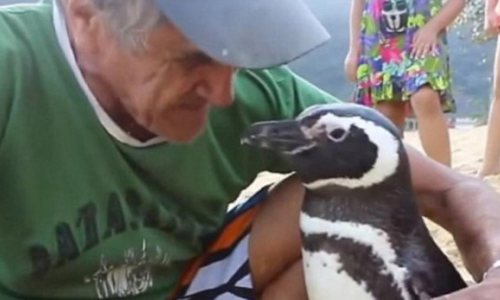 This great story comes from Brazil. In 2011, Joao Pereira de Souza, a seventy years old fisherman found a South American penguin on the shores of an...

This great story comes from Brazil. In 2011, Joao Pereira de Souza, a seventy years old fisherman found a South American penguin on the shores of an island off Rio de Janeiro, it washed up on a bed of rocks, starving and covered in oil.

The animal was about to die. The Brazilian fisherman rescued the penguin by taking care of it and cleaning its plumage. De Souza spent a week nursing the endangered bird back to health, giving him the name Dindim.

The penguin wouldn’t leave the fisherman’s side when he attempted to release him back to the waters, instead living with him for 11 months. Once the penguin grew its feathers back, it disappeared, only to return a few months later.

“Everyone said he wouldn’t return but he has been coming back to visit me for the past four years. He arrives in June and leaves to go home in February and every year he becomes more affectionate as he appears even happier to see me.”

Dindim spends eight months of the year hanging out with his human soulmate on a beach outside of Rio de Janerio and is believed to spend the rest of the year breeding off the coast of Argentina and Chile.

Adorable video of the the pals shows Dindim honking and flapping its wings at the sight of de Souza and giving the elderly Brazilian man sweet pecks on the cheek.

“He lays on my lap, lets me give him showers, allows me to feed him sardines and pick him up.”

“I think the penguin believes Jaoo is part of his family ... when he sees him he wags his tail like a dog and honks with delight,” said biologist Professor Krajewski, who interviewed de Souza for Globo TV.

The Magellanic penguin lives an average of 25 years and is known to be very faithful as it stays with the same partner till it dies. Unfortunately, all the specimens are not lucky enough to come across kind generous fishermen such as Jao. In fact, a growing number of these specimens won't survive through their annual migration off Brazil's shores to find food. Between 2010 and 2013, 180 cases of stranded penguins have been registered on the Brazilian sand.