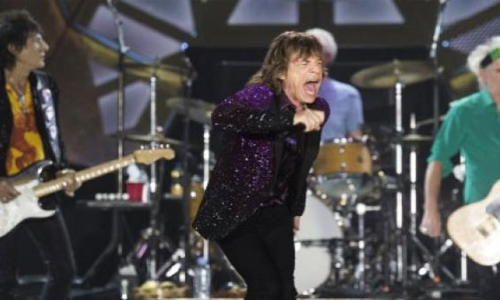 The Rolling Stones-'concert in Havana has been celebrated by over half a million people, symbolizing Cuba-'s regime recent opnenness, in the wake of...

The Rolling Stones'concert in Havana has been celebrated by over half a million people, symbolizing Cuba's regime recent opnenness, in the wake of Obama's visit.

The Stones kicked off the night with the staple "Jumpin' Jack Flash." The crowd — mostly flying Cuban flags, but Mexican, Argentinean and the Union Jack made appearances as well — gave an appreciative cheer when Jagger greeted them in their native Spanish, in between "It's Only Rock 'n Roll (But I Like It)" and "Tumbling Dice." "This is a new time," Jagger observed to roars from the crowd, a nod to the Stones' once-outlaw status in the country.

After crisp takes on standards "Angie" and "Paint It Black," Keith took over on vocals for "You Got the Silver," with his counterpart Ronnie Wood adding the slide-guitar parts. Relishing the moment with the spellbound crowd, Keith said: "Maybe I'll just stay here forever." Mick rejoined the band for an extended jam out on "Midnight Rambler," which featured Wood and Richards exchanging fiery licks. Without concession stands, the usual beer-run-shuffle was noticeably absent, but the rapt audience wasn't going anywhere anyway.

A dozen songs in and the Stones cranked up the energy with an impassioned "Gimme Shelter." Jagger's vocals carried the night in many places, but at no point was he in better form than as he traded lines with singer Sasha Allen on the classic anthem. Cuban communism might be losing steam, but over an hour into the show it was clear that Mick Jagger is not.

"Start Me Up" and "Sympathy for the Devil" followed in short order. The Stones closed with "Brown Sugar," which saw the throngs around the stage — most of whom were born after the Stones' heyday — fist-pumping in a manner more associated with EDM than rock & roll. The lights dimmed, and the crowd broke into a chant of "Olé" to pull Jagger and Co. back onstage for an encore.

As they often do, the Stones called on local choral talent to open "You Can't Always Get What You Want," while Jagger showed that two hours of balmy 80-degree Havana weather was having scant impact. They closed with "(I Can't Get No) Satisfaction." That the crowd nearly beat Jagger to the refrain suggests that the pirated music community has been thriving during the past five decades in Cuba. For all the talk of the Stones' first visit, the show felt more like a reunion of long lost friends than a first date.

The Stones took their final bow, and the audience took a deep breath. This was no ordinary concert. People hugged and shared looks of disbelief. Coming at the end of a run of shows in South America and Mexico, last night might have marked at least a temporary pause for the legendary group, but it had all the markings of a new chapter for music in Cuba.