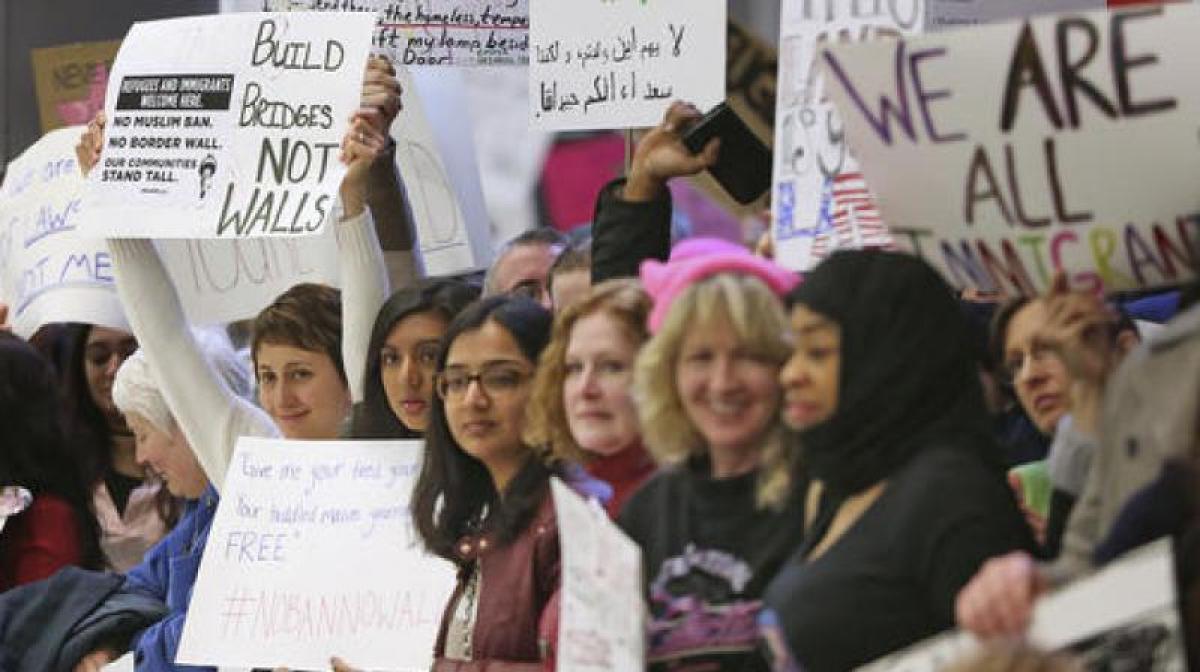 Jihadist groups, including Islamic State sympathisers, have hailed the Trump administration\'s ban on travel to the US from seven Muslim- majority nations saying it would persuade American Muslims to side with the extremists, according to a media report.

Jihadist groups, including Islamic State sympathisers, have hailed the Trump administration's ban on travel to the US from seven Muslim- majority nations saying it would persuade American Muslims to side with the extremists, according to a media report.

Comments posted to pro-Islamic State social media accounts predicted that US President Donald Trump's executive order would persuade American Muslims to side with the extremists, The Washington Post reported.One posting hailed Trump as "the best caller to Islam," while others predicted that Trump would soon launch a new war in the Middle East.

"(Islamic State leader Abu Bakr) al-Baghdadi has theright to come out and inform Trump that banning Muslims from entering America is a 'blessed ban,'" a posting to a pro-Islamic State channel on Telegram, was quoted as saying.

The writer compared the executive order to the US invasion of Iraq in 2003, which Islamic militant leaders at the time hailed as a "blessed invasion" that ignited anti- Western fervour across the Islamic world.

Several postings suggested that Trump was fulfilling the predictions of Anwar al-Awlaki, the American born al-Qaeda leader and preacher who famously said that the "West would eventually turn against its Muslim citizens," the report said.

Awlaki was killed in a US drone strike in Yemen in 2011. Another posting on the Telegram channel "Abu Magrebi" said Trump’s actions "clearly revealed the truth and harsh reality behind the American government’s hatred toward Muslims."

Leaders of the Islamic State have spoken frequently of their intention to drive a wedge between Western governments and their Muslim populations, and have welcomed outside help-- intentional or not -- in fulfilling that goal.

In a 2015 essay in the Islamic State's English-language magazine Dabiq, the group said that its motivation for launching terrorist attacks in Europe was to provoke an anti-Muslim backlash that would force ambivalent Muslims to enlist with them.

"Jihadists would have to argue to lengths that Obama, Bush, and others held anti-Islam agendas and hated the religion not just radical terrorists," said Rita Katz, founder of the SITE Intelligence Group, a private organisation that monitors jihadist websites.

"Trump, however, makes that argument a lot easier for them to sell to their followers," Katz was quoted as saying.

The reaction to the ban from Islamic State sympathisers came as current and former US officials also expressed concern that the temporary ban would undermine the global fight against violent Islamic militants.

"The effect will probably in some areas give ISIS some more propaganda," Senator John McCain told CBS News.