Heavy clashes in final push against IS in Syria 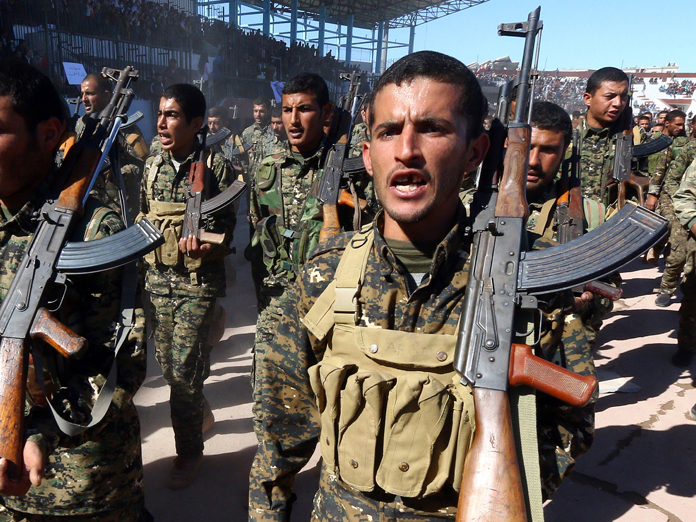 Hasakeh, Syria:US-backed forces were locked in fierce fighting on Sunday as they pressed the battle against the last shred of the Islamic State group’s “caliphate” in eastern Syria.

The Syrian Democratic Forces (SDF), supported by a US-led coalition, announced a final push to retake the jihadist pocket late on Saturday, after a pause of more than a week to allow civilians to flee.

An SDF field commander said his fighters were battling their way forwards on Sunday morning. “There are heavy clashes at the moment. We have launched an assault and the fighters are advancing,” he said.

“The battle is ongoing. There were heavy clashes this morning, with landmines going off,” said Rami Abdel Rahman, the head of the Britain-based Observatory.
The SDF launched an offensive to expel IS from the oil-rich eastern province of Deir Ezzor in September. The Kurdish-led alliance has since whittled down jihadist-held territory to a scrap of just four square kilometres between the Euphrates and the Iraqi border.

Up to 600 jihadists could still remain inside, most of them foreigners, according to SDF spokesman Mustafa Bali.

But he added the extremist group’s elusive leader Abu Bakr al-Baghdadi was likely not in the pocket.

“We do not think he is in Syria,” Bali said, without adding any details about the whereabouts of the man who declared a cross-border IS “caliphate” in 2014. On the Iraqi side of the border, French members of the coalition on Saturday stood ready to pour fury on any IS diehards seeking to escape.

Dozens of 155-mm shells were lined up ready to be loaded onto three green-and-black Caesar gun-howitzers with a range of 40 km. Coalition deputy commander Christopher Ghika on Friday said Iraqi forces had sealed the border into their country.

At the height of their rule, the jihadists imposed their brutal interpretation of Islamic law on a territory roughly the size of Britain. But separate military offensives in both countries, including by the SDF, have since retaken the vast bulk of that “caliphate”.

On Saturday, Bali said he expected the battle for the last patch of IS territory to be over in days.