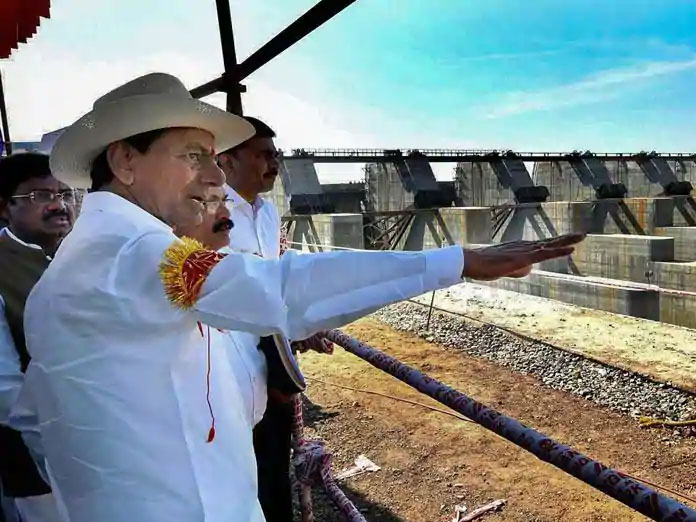 The Chief Minister made these demands and raised other concerns during the presentation before Chairman of the Fifteenth Finance Commission N.K. Singh and members Dr. Anoop Singh, Dr. Ashok Lahiri and Dr. Ramesh Chand, Secretary and other officials of the Commission here on Tuesday.

"The government has been according utmost priority to provide irrigation facilities to 1.24 crore acres. In fulfillment of this objective, we have fast tracked a number of ongoing projects whose implementation remained neglected in the combined State. We have taken up the prestigious Kaleshwaram lift irrigation project to provide irrigation facilities to over 18 lakh acres in 13 districts of the State at an estimated cost of Rs.80,000 crore. Since the State is located on the upstream of the rivers Godavari and Krishna, there is hardly any scope for surface irrigation. Invariably, we have to depend on lift irrigation projects, which are maintenance intensive. The maintenance cost of the lift irrigation projects during the award period of the Fifteenth Finance Commission is estimated at Rs. 40,169 crore. We request the Commission to support the State Government by recommending this amount as a maintenance grant," he said.

The Chief Minister said that Telangana has taken up a prestigious programme 'Mission Bhagiratha' to provide treated and piped drinking water to every household in the State. This will solve the recurring incidence of water borne diseases once and for all. "The Mission is nearing completion in a few months from now. The maintenance cost of this Mission is estimated at Rs.10,142 crore in respect of rural component and Rs.2,580 crore for the urban component for the five-year period 2020-25. We request the Commission to provide a grant amounting to Rs.12,722 crore. We are making efforts to put in place a system of levying user charges but it will take time. Therefore, these grants are needed only in the initial five years," he said.

KCR urged the Commission to increase tax devolution to 50% of the divisible pool of Central taxes. This can easily be accommodated by the Centre by reducing its expenditure on State subjects, he said.

The Chief Minister also demanded significant increase in the grants for rural and urban local bodies. He informed that Telangana has enacted a new Panchatat Raj Act and increased the number of gram panchayats from 8,368 to 12,751. Similarly the number of municipalities has gone up from 74 to 142.

Stating that Telangana, at the time of its formation, was facing several crisis like acute power shortages, high incidence of farmer suicides and economy growing at below the national average. "Many opportunities were lost and problems accumulated as a result of deliberate neglect of Telangana in the erstwhile State of Andhra Pradesh. We thought there was no point in brooding over the past neglect and be deterred by the challenges before us. We did not want such a serious crisis to go waste and took it as an opportunity to do things that were not done before to meet the suppressed aspirations of our people. We started the process of reinventing and reorienting the State to realize the goal of ‘Bangaru Telangana,’ i.e., Golden Telangana. We took up a number of programmes to alleviate the hardship of people and to put the Telangana economy on a higher growth trajectory," he said.

KCR said at the time of the making of the Indian Constitution, the primary concern was preserving the unity of the country in the aftermath of the partition of the country and the problems associated with integration of numerous princely and diverse States. Therefore, by design, the Indian Constitution was adopted with significant centripetal bias in the distribution of fiscal powers between the Centre and the States. Added to this, Centre has been increasingly intruding into State subjects by running numerous Centrally sponsored schemes, shifting subjects from the State List to the Concurrent List and introducing new schemes in State subjects without any prior consultation with States.

"As per the assessment made by the Fourteenth Finance Commission, the Centre’s expenditure on State subjects increased from an average of 14% of its total expenditure to 20% and on subjects in the Concurrent List from an average of 13% to 17% between 2002-05 and 2005-11. "This is indicative of the excess fiscal space available with the Centre, a major part of which can easily be shared with States through higher tax devolution.

The Centre’s recourse to levy of cesses and surcharges on a permanent basis has significantly reduced the divisible pool of Central taxes, affecting the interests of States. Currently, cesses and surcharges account for 14.3% of the gross tax revenue of the Centre, even after some of the cesses are subsumed under GST. What is also a matter of great concern is that proceeds of Road Cess and Clean Energy Cess are not being passed on to States fully as repeatedly pointed out by C&AG. Short transfer of Road Cess amounted to Rs.72,726 crore and that of Clean Energy Cess to Rs.44,505 crore at the end of 2017-18," he said.

The Chief Minister said that the time has come to take a comprehensive view of Union-State relations and to realign the resources in favour of the States, which are assigned functions touching on the lives of the people. "Now the States are mature enough to formulate their plans and prioritize their expenditure to suit the needs of people being closer to them. States are found to be lot more fiscally prudent than the Centre. The Gujarat and Kerala models of development were being talked about previously. Now, it is the Telangana model of development which has taken centre-stage," he said.

KCR also alleged that the NITI Aayog has failed to build Team India making States equal partners in nation’s development and promoting cooperative fiscal federalism. Further, he objected to assigning higher weightage to equity parameters like distance of per capita income in their tax devolution formula although he said Telangana was not against preferential treatment to backward States. "Income inequalities across States have been increasing and the performing States are feeling discriminated. Therefore, there is a need for separate institutional mechanism to support the capital needs of backward States outside the Finance Commission. We, therefore, strongly urge the Finance Commission to strike a balance between equity and efficiency in their dispensation so as to ensure that the performing States are not penalized," he demanded.

"The tax devolution recommended by the previous Commission has not imposed any additional fiscal burden on the Union and the fiscal space of the Union remained the same but only resulted in a compositional shift in favour of tax devolution. The actual outcomes in the first three years of the award of the Fourteenth Commission indicate that the total revenue account transfers as percentage of gross revenue receipts of the Centre more or less remained the same as in the pre-award period. Taking into account the requirements for New India-2022 may result in reducing the fiscal transfers to States," he said.

Following the recommendations of the Fourteenth Finance Commission, the Centre had dispensed with a number of programmes like BRGF, Model Schools and increased the matching contribution of States in respect of a number of Centrally sponsored schemes. Telangana suffered a double whammy with these developments and reduction of its share in tax devolution. He expressed confidence that the Fifteenth Commission will adopt a judicious approach while dealing with these considerations and ensure a higher flow of resources to States taking into account the reality that the development of the nation lies in the development of States.

With regard to conditions that the Centre may impose while giving consent to States to raise loans, KCR said when the States are adhering to fiscal responsibility regime and containing their fiscal deficit at 3% of GSDP and maintaining revenue balance, borrowings are obviously used for meeting capital expenditure. In such a situation, there does not seem to be any justification on the part of the Centre to think in terms of imposing conditions while giving consent to States to borrow. He urge the Finance Commission to recommend continuation of the facility of additional borrowings over and above the 3% of GSDP limit to States which are fiscally prudent and have shown improvement in their own revenue collections. This will facilitate the States to put their ongoing projects on fast track and to reduce cost and time overruns. The Commission may consider raising the additional borrowing facility to 1% of GSDP, he said.

"Another performance based incentive relates to the control or lack of control in incurring expenditure on populist measures. There are no objective criteria to categorize schemes into populist and non-populist. India, being so vast and diverse, the needs differ from State to State and within a State from district to district. When the Government of Tamil Nadu introduced the Mid-day Meal Scheme, it was dubbed as populist. Similarly, the Employment Guarantee Scheme launched by the Government of Maharashtra was criticized. The same schemes were later adopted by the Government of India. Similarly, the ‘Rythu Bandhu’ scheme launched by Telangana is being replicated in other States and recently, the Government of India too launched it covering the entire country, though in a much diluted manner. Therefore, the introduction of welfare schemes is better left to the States," he demanded.

"In the interests of tax harmonization, States have compromised their autonomy and extended unstinted support to the Centre in introducing GST. Sales tax/VAT, the only major source of own tax revenue of States has been subsumed under GST. Even after the Union excise duties and tax on services are subsumed under GST, the Centre is still left with buoyant sources of revenue like income tax, corporation tax and custom duties. While GST has subsumed around 31 of the gross tax revenue of the Centre, it has subsumed much larger portion of States’ own tax revenue of around 50%. As the States have sacrificed their fiscal autonomy, I request the Finance Commission to suitably compensate the States in the form of higher tax devolution," he said.