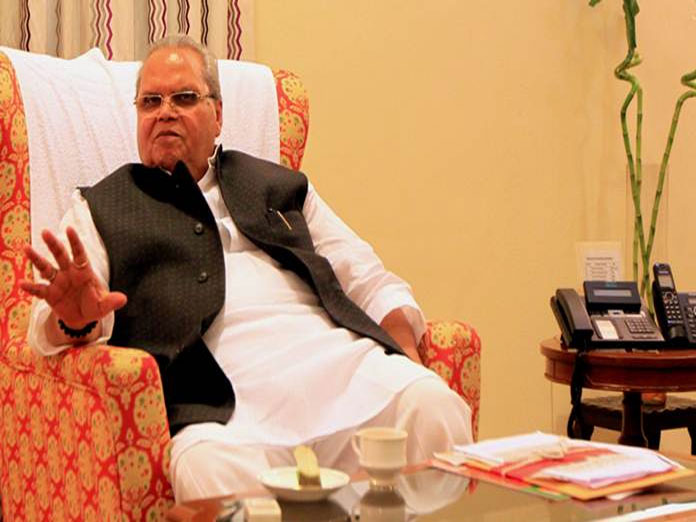 Jammu and Kashmir Governor Satya Pal Malik on Sunday urged people to stay calm and not to pay heed to rumours, saying the deployment of a large number of security personnel in the state was linked to upcoming Lok Sabha elections

​Jammu: Jammu and Kashmir Governor Satya Pal Malik on Sunday urged people to stay calm and not to pay heed to rumours, saying the deployment of a large number of security personnel in the state was linked to upcoming Lok Sabha elections.

"The Governor appealed to the people that the induction of forces be seen only in the context of conducting elections and should not be attributed to any other cause," said an official statement after Malik chaired a meeting of the State Administrative Council (SAC) to review the situation in the state in the aftermath of the suicide bombing on a CRPF convoy.

"The Governor appealed to the people not to believe in rumours of any extreme nature which are circulating widely in some quarters and to remain calm," the statement said.

"These rumours are unnecessarily creating an atmosphere of fear in the minds of people leading to stress and disruption to normal life. Rumours about curfews and other actions should not be believed," he was quoted as saying.

The Governor was reacting to mass panic in the Kashmir Valley on Saturday as rumours gripped the region that Article 35-A of the Constitution that gives special rights to people in the state was set to be abrogated.

The Governor's advisors, the Chief Secretary and senior officials attended the SAC meeting.

An official statement said the Governor was briefed about the current security situation in Jammu city, where property of a community came under attack following the suicide bombing, and the Kashmir Valley.

The recent induction of central armed forces for election duty was also discussed.

"The Governor was informed that for a smooth conduct of general elections in the state, a much larger number of central security forces is required as the security concerns have increased after the (February 14) Pulwama terror attack.

"After the Pulwama incident, the security concerns are much higher with the possibility of terrorist organisations increasing their activities against candidates and voters on a much larger scale.

"In this context, a much larger number of additional security forces are needed for conducting the general elections.

"Normally, forces are inducted a month before elections so that they settle down and familiarize with the ground situation. It is in this context that 100 companies of central forces are being inducted into the state at the moment.

"This is less than the actual additional forces required and more would be inducted in the coming weeks," the statement added.

The Governor also said security measures were being taken for the safety of Kashmiris living outside the state.

Quoting Prime Minister Narendra Modi, the Governor said there was no fight against Kashmiris and it was the responsibility of the country to take care of their safety wherever they may be.

He said over 22,000 Kashmiri students were studying outside the state and the media had played up a few scattered incidents of attacks on them.

This, he said, had caused fear and anxiety among parents whose children were studying outside the state.