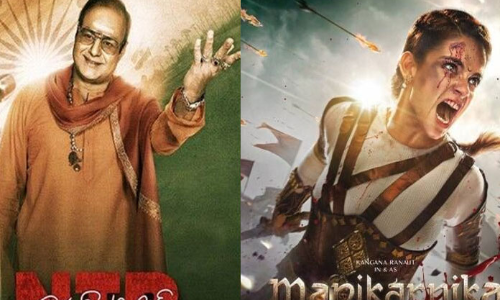 A plethora of biopics, of late, in the tinsel world Yet, nowhere does one come nearer to Richard Attenboroughs Gandhi 1982 in terms of thematic...

A plethora of biopics, of late, in the tinsel world! Yet, nowhere does one come nearer to Richard Attenborough’s ‘’Gandhi’’ (1982) in terms of thematic fidelity, historical accuracy and flawless characterisation. The wonder is we needed an Englishman to introduce Gandhiji to our own people and show authentically how he evolved as Mahatma.

The recent biopic NTR Kathanayakudu directed by Krish has come a cropper. It is shocking to see empty theatres though the movie is about the life of a peerless legend of Telugus. A total disaster, it failed to sustain the interest of the viewers with inaccurate biographical details, and anachronistic scenes.

Above all, it lacked the dramatic element and ended up being neither a documentary nor a cinema. In contrast, the biopic ‘’Maha Nati’’ was a total success as it was’’ a celebration of Savitri’s life as an actor.’’Two decades and a half ago, Sekhar Kapoor presented ‘’Bandit Queen’’ (1994) which captured the contemporary national imagination. After the release of the movie, Phoolan Devi became a national celebrity despite her criminal past.

Her pathetic life as a woman wronged in a male-dominated world of feudalists in the Chambal valley and her vengeful reprisals have elicited sympathy from all sections of society across the nation but also yielded electoral dividends. Biopics have also given space for common men who blazed a trail in myriad fields.

‘’Manjhi-The Mountain Man’’(2015) was unique in the sense that it faithfully depicted the life of a poor labourer who paved a path through a hill just using a hammer and a chisel. It celebrated the indefatigable spirit of man for conquering mountainous odds and hindrances in his journey of life.

Another biopic ‘’ Bhaag Milkha Bhaag’’ (2013) was, indeed, inspirational as it was based on the achievements of Indian sprinter Milkha Singh. The biopic was also said to be a box office success tempting the movie producers to foray into the world of biopics. Priyanka Chopra’s ‘’Mary Kom’’ (2014), Sushant Singh Rajput’s ‘’MS Dhoni; The Untold Story’’ (2017) and Emraan Hashmi’s ‘’Azhar’’(2016) promised a cash bonanza for investors heralding the age of biopics.

Biopics on sportspersons gave a wide scope for a coherent story line, dramatic action and above all they are associated with a nation’s pride and achievements in a thrilling fashion. Yet a few biopics have created avoidable controversies. ’’Jodhaa Akbar’’ (2008) which centred on romance between the Mughul emperor and a Rajput princess ruffled the feathers of vigilante groups.

A debate raged whether the movie makers could take liberties with historical personages and events. Bajirao Mastan (2015) was in for trouble when the descendants of the royal family questioned the historical authenticity of the movie. In the case of ‘’Padmavat’’ (2017), the maker of the movie Sanjay Leela Bhansali was targeted by the Karni Sena and even slapped on the sets. A bounty was also put on the head of the heroine Deepika Padukone.

Manikarnika’’ (2019) too faced a threat from the Karni Sena but an intrepid Kangana Ranaut didn’t care a hoot. The threats from the vigilante groups retreated. At the same time, biopics on political personalities have not become a rage. The reasons are obviously glaring. The movie-makers, true to their loyalties to certain political parties have presented only distorted versions of the leading personalities of the rival parties making the masses feel that these biopics have a hidden agenda.

The way Mr Singh is caricatured is said be beyond all decency and decorum.The biopic may have pleased the detractors of the Congress party but not every unbiased movie goer. Another biopic ‘’Thackeray’’ which scooped up Rs 23 crore was also criticised ‘’ for glossing over the Shiv Sena supremo’s anti-migrant and pro-Hindutva stance. The movie just unabashedly and unacceptably idolised a man who played a notoriously major role in the 1992-93 communal bloodbath in Mumbai.

The biopic ‘’Sanju’’ was also ridiculed for the way Sanjay Dutt was portrayed as an innocent man solely because of a bad company. The masses saw through the malafide intentions of the movie-makers to white wash Sanjay Dutt’s life and present him rather as the victim of circumstances than as a convict under the Arms Act in the 1993 Mumbai blasts case.