No technical trouble only political problem 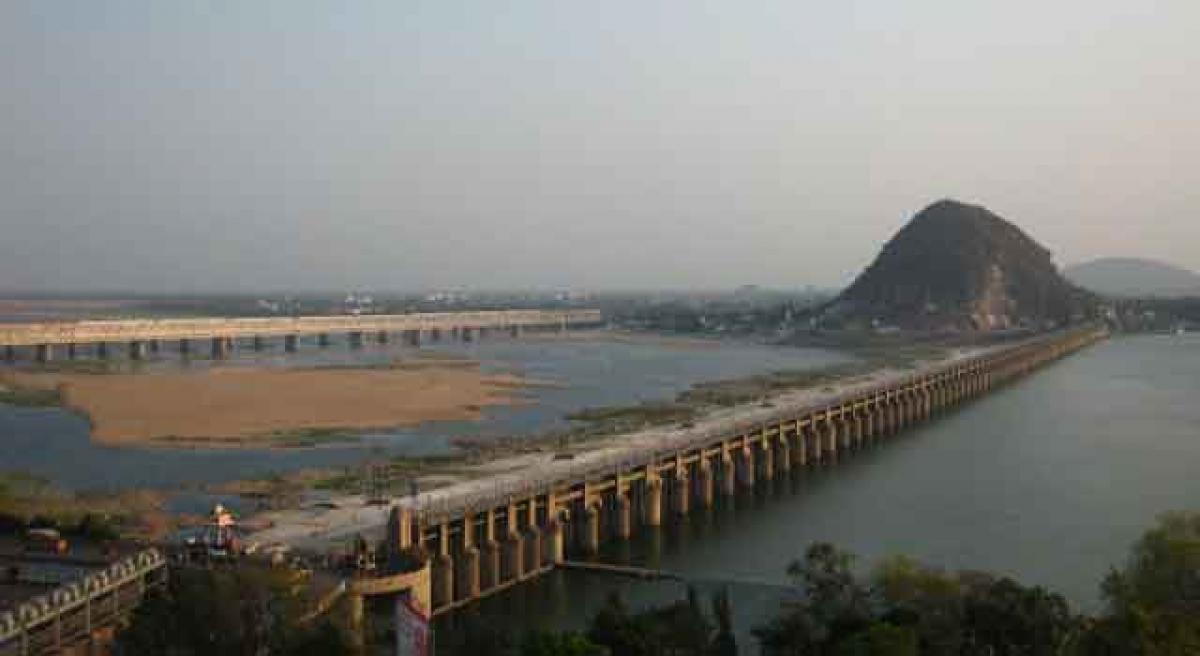 Telangana and AP governments have once again locked horns over water sharing from Krishna and Godavari rivers after the bifurcation of the state.

Telangana and AP governments have once again locked horns over water sharing from Krishna and Godavari rivers after the bifurcation of the state.

Three days of negotiations and efforts made by the Centre failed to resolve the issue as both the states refused to budge from the stand they had taken and both accuse each other of being adamant, arbitrary in decisions and of being non cooperative.

The words used by the irrigation ministers of the two Telugu speaking states were almost similar. A stage had come where even the Centre threw up its hands and asked the two states to sit across the table and come to some understanding within a month.

Nowhere in the country does such a situation exist. What is worse is that while the Srisailam project falls under the jurisdiction of Chief Engineer Andhra Pradesh the power project on the left bank is with Telangana Genco.

On the other hand the Nagarjuna Sagar project is under the jurisdiction of Chief Engineer Telangana. It is he who has to release water for Krishna Delta in Andhra Pradesh and right canal of Nagarjuna Sagar. This is where the controversy arises.

A year ago, TS and AP had reached an agreement that till a final decision was reached, both states would share 811 TMC feet of assured water in the Krishna in a ration of 512 and 299 TMC ft. However, there was no significant inflow into the Krishna not only in the Telugu states but even in Karnataka and Maharashtra this year.

While this is the ground situation, both AP and TS are now fighting over the diversion of 80 TMc feet from Polavaram to Krishna Delta. TS claims that it should get 45 TMC of water out of the 80 TMC feet. But AP argues that being lower riparian state, they have every right to utilise the 80 TMC feet of water which would otherwise go into the sea.

It also says that it was using this water to help the drought prone Rayalaseema region. AP alleges that TS was taking up irrigation projects illegally which would affect the interests of AP and hence insists that the Krishna River Management Board should be given full control of the projects on Krishna. It also wants the Union Ministry of Water Resources to accept the draft notification sent to it by KRMB.

AP argues that the Krishna River Management Board has been formed to ensure harmony in water sharing between the two states. Both Telangana and Andhra Pradesh have large populations engaged in agriculture and water supply is a sticky political issue.

A Union government-appointed apex council, headed by the Union water resources minister, will oversee both the river water boards. Among its functions, the council is responsible for “planning and approval of proposals for construction of new projects, if any, based on Godavari or Krishna river water, after getting the proposal appraised and recommended by the river management boards and by the Central Water Commission, wherever required”, according to the Act.

The boards, for their part, are responsible for evaluating any proposal for construction of new projects on Godavari or Krishna rivers and giving technical clearance after ensuring those projects don’t violate water sharing pacts overseen by water tribunals.

TS opposes the jurisdiction of Krishna River Management Board, said Telangana would utilise its quota of 1,300 TMC ft of water by completing all proposed projects on Krishna and Godavari. It is also claiming share in surplus water.

The surplus water has been programmed for use in seven projects — three in Telangana and four in the Seemandhra region. “But, it has to be seen how things will develop as the projects based on surplus water will not have legal sanctity till the tribunal notifies the award,” says TS Irrigation minister T Harish Rao.

The issue in the case of Godavari water is simpler: 900 TMC ft of assured water is allocated to projects in Telangana and 580 TMC ft to Seemandhra. Experts feel that the chance of securing any additional share from the two rivers is remote going by the current trends and methodology adopted by the tribunal.

If we analyse the situation impartially, it becomes clear that the problem is more political rather than technical. It appears that the entire effort of both the states is to ensure that litigation will continue for much longer period and that is why neither of them want to compromise and agree to any proposal.

The TS irrigation minister claims that he called for a meeting with his AP counterpart D Uma Maheswaram Rao to resolve the issue but there has been no response from that side. But the Andhra Pradesh Government says that the TS was taking up several new projects in the name of redesigning which would adversely affect its interests.

AP Minister says they were ready for talks and it was TS government which was putting up impractical proposals. Now AP has come up with another argument. They say that TS should first decide and declare whether it calls itself as upper riparian state or lower riparian state.

They say if TS is upper riparian state, it has no right on the water that is utilised by AP since it is at the tail end and if it does not utilise the water, it would go waste into the sea. It further argues that TS should not construct new projects without the clearance of the Central Water Commission since as of now it is the upper riparian state and any additional impounding of water would adversely affect the interest of Andhra Pradesh.

The Centre too seems to be taking its own time and does not appear to be in a hurry to resolve the issue. All this gives rise to speculation that all the three players, the TS government, AP government and the Union government are looking more for political advantages rather than working for the interests of both the Telugu speaking states.

If the controversy continues, it will help both the Telugu states to keep the sentiment alive and thereby get political mileage. The BJP which is trying to strengthen its base in both the states also sees advantage to fish in the troubled waters.

If the Centre does not intervene and take speedy decision, then both states are in for greater trouble. We had already witnessed drought conditions in both states last year and if there are no inflows into Krishna this year, the situation is going to be very tough.

Karnataka which happens to be the upper riparian state will not release even a drop of water unless all its reservoirs are full. As of now the monsoon has not been very active and this rings danger bells for both the Telugu states. Hope better sense would prevail upon the political bosses of both the states and they would sit across the table and resolve the issues.