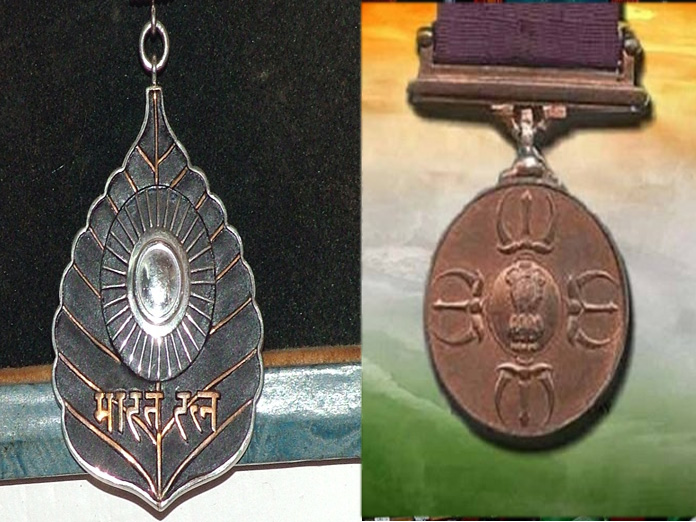 Bharat Ratna which literally means the Jewel of India is the highest civilian award of the Republic of India It was instituted on January 2, 1954,...

Bharat Ratna which literally means the Jewel of India is the highest civilian award of the Republic of India. It was instituted on January 2, 1954, with the very aim of conferring it in recognition of exceptional service or performance of the highest order, without any sort of distinction of race, occupation, position, or sex.

The award was originally limited to achievements in the arts, literature, science and public services but the government expanded the criteria to include any field of human endeavour with a December 2011 amendment. Bharat Ratna recipients rank seventh in the Indian order of precedence but are constitutionally prohibited from using the award name as a title.

Though Bharat Ratna is the highest civilian honour of the state, it has been surrounded by some controversies too. In the past, when the news began making rounds that the government has decided to recommend the name of Netaji Subhash Chandra Bose, many views in various forms have started vacillating around.

While some people discoursed that Bharat Ratna has become a watered down decoration and it makes no meaning to confer the same upon the great freedom fighter like Netaji Subhash Chandra Bose, few others harangued that it was too late to consider Netaji for such an honour. In fact, in the year 1992 itself, the then union government decided to confer the award posthumously on Subhash Chandra Bose but met with controversy.

Due to the debate surrounding Netaji’s death, the posthumous mention of Bose was much criticised, and also his family refused to accept the award. Following a 1997 Supreme Court decision, it was promulgated that Bose’s award was cancelled. In Indian history, it is the only time when the award was announced but hasn’t conferred.

Even in the recent episode, with the tittle-tattle around the proposal of Bharat Ratna to be conferred on Netaji Subhas Chandra Bose, a majority of his family members censured of the idea and not accepted the proposal. Netaji’s grandnephew Chandra Kumar Bose said that Netaji had been missing since 1945. If he has to be awarded Bharat Ratna posthumously, it should be said that he is dead. In this milieu, he insisted on the evidence for his death. He further said that the best way to honour Netaji was to declassify government files that could reveal the truth behind his disappearance.

Many eminent people from all walks of life opined in the past that the value of Bharat Ratna has ebbed over a period of time, and also spoken out that it is just the political influence that fetches the highest honour and not the services or performance as aimed while instituting the award. Of course, conjointly there have also been many views supporting the apt selection of recipients.

From the other end, Param Vir Chakra (PVC) which literally means Wheel of the Ultimate Brave is India’s highest military honour conferred for the highest degree of courage or altruism in the presence of the enemy. It can be and often has been awarded posthumously. It is equivalent to the Medal of Honour in the United States, and the Victoria Cross in the United Kingdom.

The PVC was instituted on January 26, 1950, the Republic day of India, by the first President of India Dr Babu Rajendra Prasad, to be effective from August 15, 1947 — the Independence Day of India. Major Somnath Sharma was the first recipient of PVC. The PVC can be awarded to personnel of all ranks from all branches of the Indian military. Like other military honours, even PVC can be awarded for the second time. Nevertheless, there has not even been a single case of such kind, so far.

The Ashoka Chakra is the peacetime equivalent of the Param Vir Chakra and is awarded for the most conspicuous bravery or some daring or pre-eminent valour or altruism other than in the face of the enemy in a war. The decoration may be awarded either for military or civilian personnel and may be awarded posthumously.

Though Param Vir Chakra was instituted prior to the institution of Bharat Ratna, the number of awardees of PVC is far less than those conferred with the Bharat Ratna. The standards considered for awarding PVC is evident from the fact that in 87 years history of Indian Air Force (came into force on Oct 08, 1932), Flying Officer Nirmal Jit Singh Sekhon, stands to be the only person to get awarded the Param Vir Chakra, posthumously, in 1971.