Pakistan on top despite Woakes heroics 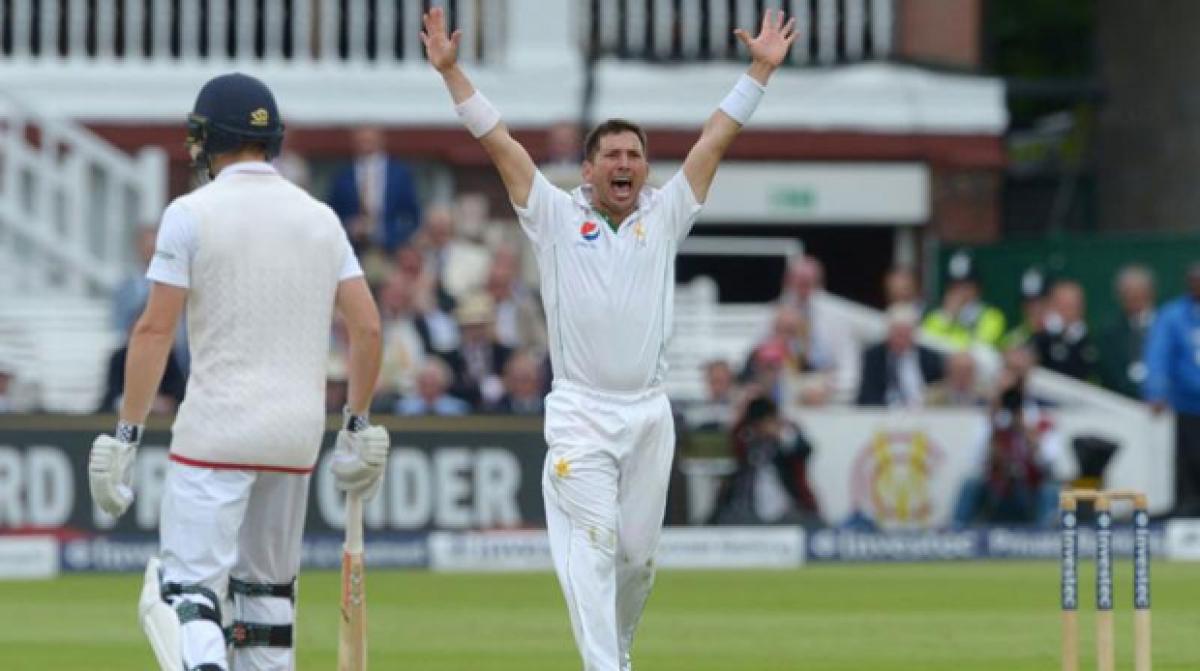 Yasir Shah made a useful unbeaten 30 after starring with the ball to leave Pakistan well-placed come stumps on the third day of an intriguing first Test against England at Lord\'s on Saturday.

Yasir Shah made a useful unbeaten 30 after starring with the ball to leave Pakistan well-placed come stumps on the third day of an intriguing first Test against England at Lord's on Saturday.

Pakistan were 214 for eight in their second innings at the close, a lead of 281 runs, after leg-spinner Shah took six for 72 in England's first innings 272.

But at stumps he was shaking hands with Chris Woakes after the Warwickshire all-rounder had taken five for 31 to follow the lively paceman's Test-best haul of six for 70 in Pakistan's first innings 339.

Woakes, only recalled to Test duty after fellow all-rounder Ben Stokes was injured during the preceding Sri Lanka series, now had an overall return of 11 for 101 -- the first time he had taken at least 10 wickets in a Test match.

It also made him the first England bowler to take five wickets in each innings of a Lord's Test since all-round great Ian Botham did so against New Zealand in 1978.

England now need to at least equal their record fourth-inning score to win a Test at Lord's of 282 for three against New Zealand in 2004 if they are to go 1-0 up in this four-match series.

Sarfraz Ahmed (45) and Shah frustrated England in a seventh-wicket stand of 40.

Both batsmen were dropped off the luckless Steven Finn as the fast bowler went wicketless on his Middlesex home ground.

Shah was on two when he chipped Finn and a diving Stuart Broad just failed to cling on to a tough low chance at mid-off.

Ahmed should have been out for 36 when Finn took the outside only for wicket-keeper Jonny Bairstow, going to his right, to drop the chance as the ball hit his wrist.

Fortunately for England, it was not too costly a miss with Woakes producing even simpler chances that Bairstow held to get rid of both the gritty Ahmed and Wahab Riaz (nought).

But Finn knew it wasn't his day when Shah, promoted from his first-innings spot of No 11, went down on one knee to hoist him for four high over deep square leg.

"I apologised to him (Finn), because I came on and picked up a couple of cheap ones (wickets) -- and he'd bowled really well and deserved a couple if not more," said Woakes.

Pakistan were 40 for one at lunch but they lost opener Shan Masood soon afterwards when the left-hander, once more fallible outside off stump, flat-footedly edged Woakes to England captain Alastair Cook at first slip.

Azhar Ali (23) then fell lbw to a desperately tight umpire's call as Woakes reduced Pakistan to 59 for three.

Misbah, in his maiden Test knock at Lord's, had made 114 in Pakistan's first innings.

But on Saturday he fell for nought when he heaved off-spinner Moeen Ali legside and Alex Hales, running round to the mid-wicket rope, held a good catch.

Pakistan had never previously lost a Test when Misbah had made a hundred and never won one when he had made a duck but one of those records was now under threat.

The unsettled Younis Khan played on to Ali for 25 two balls after driving him for four.

Asad Shafiq struck a well-made 49 before,in sight of his second fifty of the match, he was bowled by a Woakes 'trimmer'.

Earlier, Shah produced the best innings bowling by a visiting spinner against England in a Test at Lord's since Sid Pegler's seven for 65 for South Africa back in 1912.

Conditions should be more in his favour on a wearing fourth-day surface and Woakes said: "We'll have to play him better than we did in the first innings.

England resumed on their overnight 253 for seven, after Shah induced a middle-order collapse on Friday.

They added just 19 more runs Saturday, with Woakes 35 not out as he emphasised his all-round credentials.