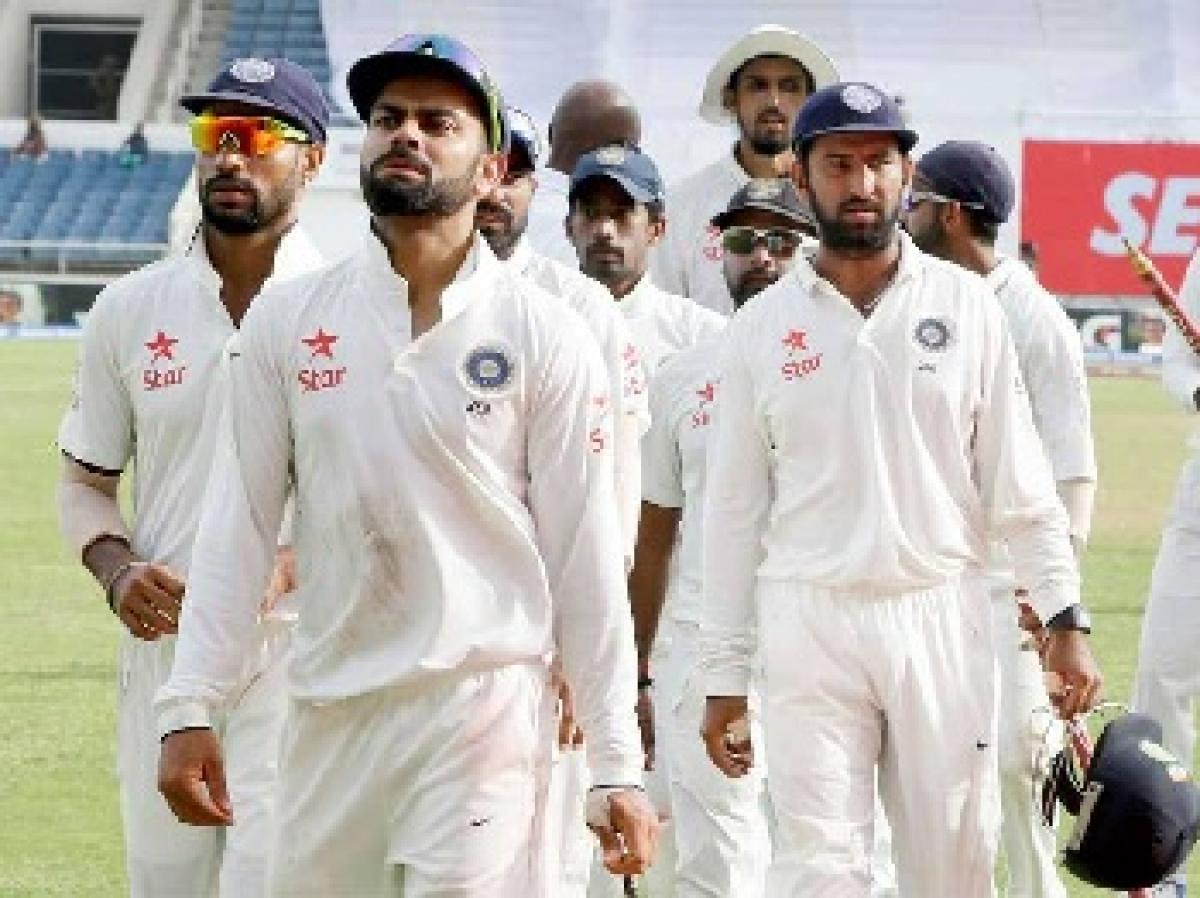 Indian bowlers were thwarted by Australia\'s perseverance as Steve Smith\'s men survived a battle of nerves today to force a draw in the third cricket Test here and keep the series alive.

Ranchi: Indian bowlers were thwarted by Australia's perseverance as Steve Smith's men survived a battle of nerves today to force a draw in the third cricket Test here and keep the series alive.

Starting the day at a nervy 23/2 in reply to India's 603/9 declared, Australia were 204/6 in 100 overs in their second innings when the two teams decided to end the proceedings.

The visitors managed to hold on thanks largely to Peter Handscomb and Shaun Marsh's gritty vigil at the crease.

Handscomb (72 not out) and Marsh (53) combined to share a 124-run fifth-wicket partnership to steer Australia to safety after the cheap dismissal of skipper Steve Smith (21) and Matt Renshaw (15) had given the visitors' dressing room moments of anxiety.

Marsh was eventually dismissed by India's bowling star Ravindra Jadeja, who continued his purple patch to finish with figures of 4/54.

Handscomb, on the other hand, played the anchorman role to perfection and remained unbeaten after holding the fort for 200 deliveries.

The Indian bowlers, especially pacer Ishant Sharma (1/30), looked menacing in the pre-lunch session but the Aussies managed to hold their ground in the last two sessions.

With today's result, the series remained locked at 1-1 setting up a mouth-watering finale in Dharamsala, starting March 25. The hill town would be hosting its maiden Test match.

The simmering tensions between the two sides have only added to the drama with today being no exception.

There was animated chatter between Renshaw and Ishant in the latest round of verbal altercations before the Indian pacer had the last laugh by trapping the opener LBW.

Having turned the tide yesterday, riding on Cheteshwar Pujara and Wriddhiman Saha's marathon partnership, India were in contention for an unassailable lead in the series.

However, Handscomb and Marsh absorbed the pressure with their calculated knocks to deny the hosts, who apart from the sizeable crowd, were also cheered on by former captain and local favourite Mahendra Singh Dhoni.

Premier off-spinner Ravichandran Ashwin was a major disappointment for the home team. He managed just one wicket in the second innings to go with his solo scalp in the first essay.