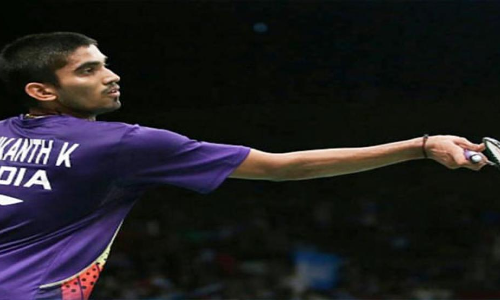 The Guntur native, who is based in Hyderabad, took only 37 minutes to outplay his Chinese opponent 21-10, 21-14.
The 24-year-old Indian shuttler dominated the proceedings right from the start and finished off in straight games to reach the summit clash.

Srikanth has now reached his third consecutive final. He finished runner-up at the Singapore Open before winning the Indonesia Open title last week.

He will face Chen Long of China in the final. Chen defeated Lee Hyun Il of South Korea in a tough three-game battle in the other semi-final.

Chen enjoys a 5-0 advantage against Srikanth in the head to head record and the Indian will have to be at the top of his game during Sunday's final in order to have a chance of clinching the title.

Placed 11th in the world rankings, Srikanth dominated his fourth ranked rival right from the start, opening up a 6-4 lead in the opening stages of the first game.

The Indian continued to hold the upper hand, building on his lead to go into the break with a healthy 11-7 advantage.
He blew off the Chinese shuttler after the break, taking four consecutive points to lead 16-9 before another burst of five back to back points saw him take the opening game.

Shi put up more of a fight in the early stages of the second game. The two shuttlers battled neck and neck till 7-7 before a three-point burst saw the Indian take the lead at 10-7.

Another streak of five points saw Srikanth at a commanding 15-8 advantage. The Indian never looked back from there as he sealed a comfortable victory.

She will face fellow Japanese Nozomi Okuhara in the final. Okuhara defeated sixth seeded Chinese Sun Yu 21-18, 18-21, 21-14 in the other semi-final.

The Danish pair will meet the top seeded Japanese pair of Misaki Matsutumo and Ayaka Takahashi for the title.
Matsutumo and Takahashi overpowered the fourth seeded Chinese pair of Chen Qingchen and Jia Yifan 21-17, 21-11 in the semi-finals.

In men's doubles, third seeds Takeshi Kamura and Keigo Sonoda of Japan will face the Indonesian-Malaysian combination of Hendra Setiawan and Boon Heong Tan in the final.

The Japanese duo defeated the Chinese Taipei team of Lu Ching Yao and Yang Po Han 21-15, 21-15 in the semi-finals.
In the other men's doubles semi-final, Hendra and Boon had a much tougher time against the Chinese pair of Liu Cheng and Zhang Nan before prevailing 21-15, 14-21, 21-17 in 58 minutes.

In mixed doubles, the seventh seeded Indonesian pair of Praveen Jordan and Debby Susanto will meets top seeds Zheng Siwei and Chen Qingchen of China in the final.