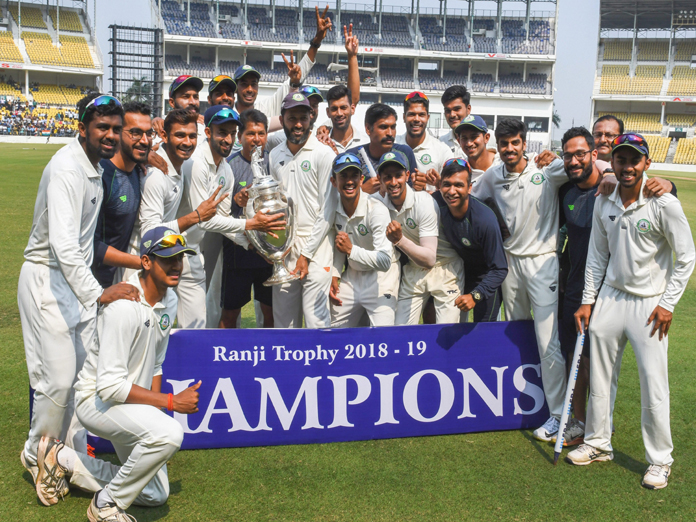 Vidarbha, repeated their performance of the previous year and once again went on to become the proud winners of Indias premier domestic cricket tournament, the Ranji Trophy

Vidarbha, repeated their performance of the previous year and once again went on to become the proud winners of India’s premier domestic cricket tournament, the Ranji Trophy. This was the 85th year of the major tournament in memory of one of the greatest Indian born cricketers, Ranjit Singhji. The dream of playing in this prestigious tournament was every Indian cricketer's aspiration and a good performance in it was what elevated one to play for India.

The importance of the Ranji Trophy has diminished quite radically. The present well acclaimed Vidarbha coach and former Indian player, Chandrakant Pandit, during his interview sadly highlighted, how the performance of the players in the Indian Premier League (IPL) has taken precedence over the major domestic tournament.

He goes on further to plead for a place for his players to be included, if not in the Indian side but at the least as a part of the India ‘A’ side. He does make a serious point, as apart from Umesh Yadav, surprisingly none of the other players from the two times champion side are contenders for a place in the Indian side.

This gets one to admire the process that Chandrakant and his support staff have put in place, that a side without a superstar amongst them is consistently still winning. A tweet by the astute businessman Harsh Mariwala, sums it up perfectly. He mentions three steps to a team’s successful performance, “coming together is the beginning, keeping together is mandatory in order to progress and working together leads to success”.

Vidarbha has truly shown by imbibing the way that Mariwala has defined, to evolve into a champion side. The Ranji Trophy, however, needs a serious revamp. The Board of Control for Cricket in India (BCCI), needs to infuse innovative ways of bringing luster to the fading tournament. The once popular and well attended stadiums are more or less empty during the league stage and were equally bare during the final.

It must have been very disappointing for the players, to be playing the final match of the prestigious tournament with barely a few hundred supporters egging them on. I felt sorry for my former team, Saurashtra. This was their third attempt to win the trophy in the last decade and having beaten Vidarbha in the first innings in the league stage, could not cross the wire when they most needed it.

The presence of the hero of the recently concluded Australian Test series, Cheteshwar Pujara, was a perfect boost for the Saurashtra team's morale. A lot depended on him to carry them forward, unfortunately, he failed quite surprisingly in both the innings.

The BCCI needs to schedule the cricket itinerary in such a way that the Ranji Trophy has the participation of the Indian star cricketers in it. The arranging of tours of foreign 'A' teams during the vital period of the tournament is another blemish this year by the BCCI.

This, therefore, resulted in the Indian 'A' side performances superseding the domestic ones. Although, playing matches against a touring side does have its advantages, diffusing one's domestic cricket will definitely not augur well in the long run.

Indian cricketers need to feel the importance of the Ranji Trophy. The BCCI has made a complete mess as regards the Duleep Trophy and one hopes that the premier domestic tournament does not receive the same fate.

The eight teams to qualify for the knock-out stage of the Ranji Trophy was another debatable issue. The teams were divided into four groups and the 'A' and 'B' comprised the elite lot of nine teams each.

The process of the top five teams qualifying from the combined group on point basis which they had acquired by playing in their respective sections was quite ridiculous. How can teams playing in a different pool accumulating points in their group, be pitted against each other to qualify. It just does not make any sense at all.

The other questionable issue was the inclusion of the two teams from the lower 'C' division and one from the lowest 'D' division as well. Teams that had not done well previously, should not have had any option of playing in the last stages of the coveted trophy.

Maharashtra, who have been relegated to the 'C' division, are now feeling elated as they are hoping to be one of the two top teams from the group next year, so that they will get an opportunity to play and maybe win the Ranji Trophy.

An ideal backdoor entry to win the cup. The teams qualifying for the knockout stage should be only from the top two groups. One cannot have four teams qualifying from the 'A' group and only one team from 'B', as it happened this year in the knock-out stage.

The evergreen performance of the leading run scorer in the Ranji Trophy who scored over a thousand runs this year, the incredible Wasim Jafar, is truly remarkable. He looks to be heading towards achieving the feat of two great Indian cricket legends, C.K. Nayudu and Professor Deodhar of scoring a century in the Ranji Trophy at the age of 50+ years. He still has a decade to do so, but the way he is batting and keeping himself fit, he could very well emulate the two stalwarts.