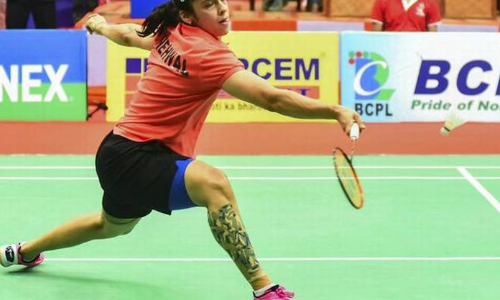 Birmingham: Ace Indian shuttler Saina Nehwal progressed to the quarterfinals of the All England Championships with a come-from-behind win over Denmark’s Line Højmark Kjaersfeldt in the women’s singles here on Thursday.

A 2015 finalist, Saina was blown away by world No. 19 Line in the opening game but the experienced campaigner kept her cool to take the match to the decider and come up trumps against her Danish rival.

The eighth seeded Indian rallied her way to a 8-21, 21-16, 21-13 win over the 24-year-old Line in a 51-minute match and is expected to take on her nemesis and two-time champion Tai Tzu Ying of Chinese Taipei, an opponent who defeated her in last 12 outings.

In the men’s singles, former Singapore Open champion B. Sai Praneeth’s fight lasted just 35 minutes as he went down 12-21, 17-21 to 24-year-old Ng Ka Long Angus, who had denied Sameer Verma a title win at the 2016 Hong Kong Super Series. It was his third loss to the world no 15 from Hong Kong.

On Wednesday, Kidam-bi Srikanth had disposed of France’s Brice Lever-dez 21-13, 21-11 in the opening round to set up a clash against Asian Ga-mes gold medalist Jonatan Christie.

Sameer Verma squandered a first game advantage to go down fighting 21-16, 18-21, 14-21 to former world champion and world no. 1 Viktor Axel-sen of Denmark.