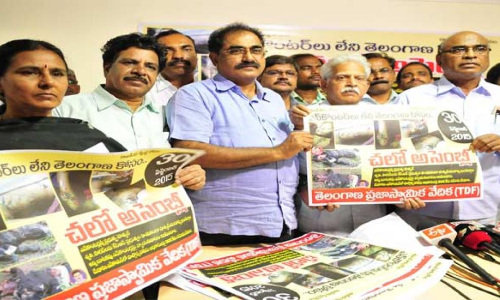 Police increased their surveillance over Jiyannapet village in Kotabommali mandal of Srikakulam district as they suspected that one of the masterminds ...

Police increased their surveillance over Jiyannapet village in Kotabommali mandal of Srikakulam district as they suspected that one of the masterminds behind Congress leaders massacre incident in Chhattisgarh, Nambala Kesava Rao alias Basava Raju, A might come to hide in the village, which happened to be his native village. The police intelligence sources said as the heat was on, Kesava Rao and some of his associates might slip in to this area to cool their heels.

Kesava Rao who is the member of the Maoist party central committee was born here and had early education. He did his B Tech in Warangal and there he was attracted towards Maoist ideology and became a member. He rose in the party hierarchy and occupied key positions. He carries an award of Rs. 25 lakh on his head. His father who retired as a teacher died a few years back. At present, nobody from his family lives in the village.

Earlier, the police attached notices to his ancestral house that if he did not surrender before the court where cases were pending, his property would be attached. On inquiry, they found that there was no property in his name in the village.