The sound of dignity 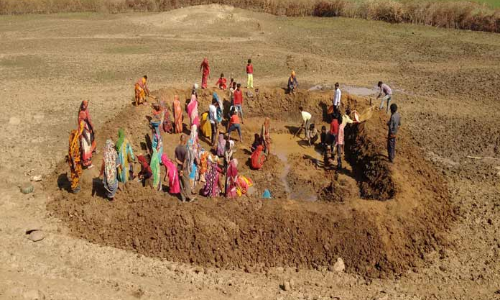 There were no celebrities, film stars, bureaucrats or politicians flanked by intimidating gunmen here No platitudes in praise of powers that be, no hangerson trying to make an impression As the banquet hall in a decrepit building in Hyderabad, filled up with people of all ages and hues and all classes and views, it was apparent that this celebration was different

There were no celebrities, film stars, bureaucrats or politicians flanked by intimidating gunmen here. No platitudes in praise of powers that be, no ‘hangers-on’ trying to make an impression. As the banquet hall in a decrepit building in Hyderabad, filled up with people of all ages and hues and all classes and views, it was apparent that this celebration was different. Goonj, the Non-government organisation (NGO) headquartered in New Delhi, garnering international acclaim for pioneering work in rural development in 23 States across the country using excess urban household material as a tool, was marking two decades of its existence. In attendance were stakeholders, sympathisers, donors and like-minded individuals, who had grown into one large, happy family. “Our celebrations in different cities have all been like this with CEO’s of companies, students, homemakers, individuals, who believe in giving and a whole cross-section of society joining us. Most of them have heard about our work from their daughters, sons or friends. This is really touching. It gives us hope,” says Anshu Gupta, the humble and unassuming founder of Goonj.

No different from any of their annual celebrations called ‘Chaupal: No Agenda Conversations’ their website invites asking people to join them for a few hours of stories, ideas and conversations, with fellow travellers, like-minded friends and some basic but good food, in more ways than one mirrors the simplicity and honesty of the founder.

Known by epithets like the ‘Clothing man of India’ one who makes ‘something out of nothing’ and a social entrepreneur whose model of development is not cash based but ‘trash based’, Gupta received the Ramon Magsaysay award in 2015 for his ‘creative vision in transforming the culture of giving in India, his enterprising leadership in treating cloth as a sustainable development resource for the poor and reminding the world that true giving respects and preserves human dignity’. The Ashoka fellow and recipient of many prestigious awards was a former student of mass communication and manager with an automobile company before he quit his job to start Goonj in 1999.

Beginning work at his modest two-bedroom apartment in Sarita Vihar in Delhi with 67 pieces of clothing gathered from friends and family including those of wife and co-founder Meenakshi Gupta, he grew the organisation into a massive movement with 900 employees transcending geographical boundaries and transferring more than 1,000 tonnes of clothes, household goods, stationery, toys, old water bottles, lunch boxes and utensils to remote villages in India. Clothes are given to people under a unique ‘cloth for work’ programme, since distributing them for free would have been a mere act of charity depriving people of self-respect. People receive clothes in return for repairing roads, digging wells, recharging water ponds, building bridges and taking up activities that usher in development. “We endeavour to make them stakeholders in progress. I do not like to use the word donors or beneficiaries. As our work grew, so did our volunteers. Our home was the core of our activity. We grew into a large family, working, cooking and sharing meals together,” he beams.

One incident that prompted serious thinking about clothing relates to his spotting a dead man on a cold wintry night on the streets of Delhi with flimsy clothes clutching a bottle of alcohol in one hand while an untouched packet of food lay by his side. This was a moment of revelation after which he made it his life’s mission to make clothing available to the needy, taking care to keep their dignity intact. He also noticed that clothes provided during natural disasters were in excess and not properly distributed. At Goonj hundreds of people sort, sterilise, grade and match clothes which are then packed in gunny bags and dispatched. Sarees and woollen clothes are repaired, jeans are turned into school bags and undergarments are made from t-shirts.

Shiny bright coloured shawls are converted into bridal clothes. Nothing is wasted as old zips, buttons, laces and other materials are used to mend clothes or give them a new look. Every material here is recycled and used in a changed form.

‘Not just a piece of cloth’ scheme run by Goonj sterilises cotton clothes, cuts them into strips and makes sanitary pads for use by rural women. This is a boon where many rural women using jute bags, dry leaves or grass during menstruation have severe infections impacting their health. The supply chain then involves the collection, sorting out and distribution with many volunteers sourcing clothes and other material and passing them on to collection centres in different locations and cities. Goonj has also risen to the occasion whenever disasters have struck, be it an earthquake, cyclone, tsunami or flood. “People are not informed properly. There is misinformation about a lot of things. It is not that they don’t want to give. They are usually in the middle of all kind of data and stuff that is not real. We need to give them information about the harsh realities in society,” Gupta says when asked to spell out experiences from his journey.

Naysayers and those who look at all NGO’s with suspicion are very often those who cannot see things as they are according to Anshu Gupta. “People who are wrong themselves see a lot of it in others.

Every single person making such allegations should look inwards first. If a hardcore mining or a municipality guy comes and questions any institution, NGO or Non-NGO, I don’t know what right they have to do that. Half of them have lost that right. Many people from the medical fraternity have lost that right. It is very easy to make allegations but people living in glass houses cannot hurl stones at others,” he opines. As he continues to look at every opportunity to better his work and make giving a culture Gupta feels that it is time to move out of mere discussions, deliberations and social media posts. “We don’t need thinkers any more. We need doers. We need initiative. We need action ‘Words’ that reverberate loud and clear as Goonj looks back with pride and forward with hope on a journey that ever inspires.”