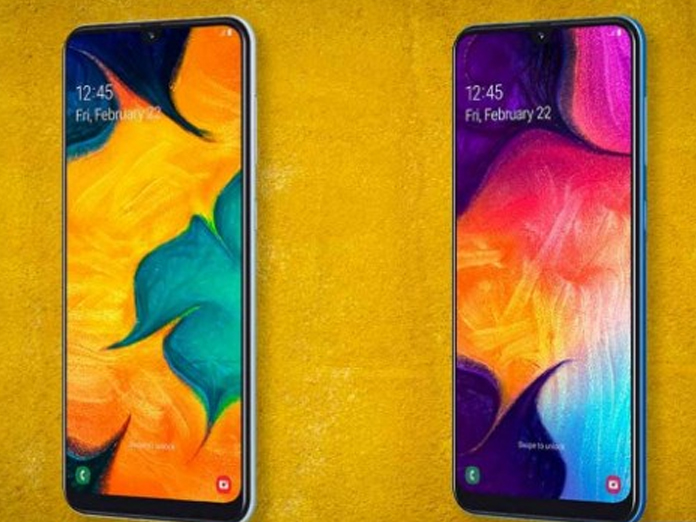 Samsung Galaxy A50 flaunts a 64inch FHD InfinityU display and has a Super AMOLED resolution The handset offers a screen to body ratio of 916 It is available in two different variants 4GB RAM 64GB storage and 6GB RAM 64GB Storage When it comes to the processor it is powered by octacore Exynos 9610 SoC The Galaxy A50 has a lot to prove and as its out to set a mark, lets take a bri

Samsung Galaxy A50 flaunts a 6.4-inch FHD+ Infinity-U display and has a Super AMOLED resolution. The handset offers a screen to body ratio of 91.6%. It is available in two different variants - 4GB RAM + 64GB storage and 6GB RAM + 64GB Storage. When it comes to the processor it is powered by octa-core Exynos 9610 SoC. The Galaxy A50 has a lot to prove and as it's out to set a mark, let's take a brief look at it.

Galaxy A50 in hand feels very polished. The phone is sleek at 7.7mm with 3.5mm headphone jack and USB-C on the rear of the device joined by power and volume buttons on the side. It has curved edges that merge into the screen. Especially at the chin, there are fairly noticeable bezels.

On the back, there’s a reflective coating that scatters the light through the plastic shell and makes for really appealing hues. In terms of how phone manufacturers are getting creative with rear panels of smartphones, this is something really new.

By Samsung, the Galaxy A50 is the second smartphone to feature an in-display fingerprint sensor. The optical reader isn’t very fast the way we would have expected on what the competition is offering. The unlocking of the phone a bit slow, because of the animation, but that’s a performance issue.

But Samsung has impressed with the rear panel and the solid built.

The device with 6.4-inch the Super AMOLED panel looks large and beautiful. The display’s got a Full HD+ (2340 x 1080 pixels) resolution and a pixel ratio density of 404 dpi. It also has the u-shaped notch on the front, the handset offers a screen to body ratio of 91.6%, making it one of the better option to consume content on. Watching videos and playing PUBG Mobile in HDR on the Galaxy A50 is an immense experience.

Initially, we were a little hesitant about the auto-brightness where it gets activated even after being disabled manually.

The Galaxy A50 device is power-packed by a 4,000mAh battery. The phone also supports fast charging of 15W, if the battery does run down it'll easily get charged again. After draining the phone completely it was able to recharge from 0% to 100% in 1.5 hours.

Samsung deploys a tri-camera setup on the A50 which consists of a primary 25MP camera with an f/1.7 aperture, a 5MP depth-sensing camera with f/2.2 aperture and an 8MP ultra-wide angle lens with 123-degree field of view.

After using the camera for a limited time, the A50 takes better photos during daylight and poorly performed at night. In daytime and well-lit environments, the cameras were able to capture fine details with perfect colours and dynamic ratio. However, in a low-lit environment, the sensor fails to capture all the details. The third ultra-wide angle sensor gives a different perspective to the frame and should be a point of interest for enthusiasts.

Galaxy A50 is powered by the Exynos 9610 chipset with an octa-core CPU, where four Cortex-A73 high-powered cores clocked at 2.31GHz and four power-efficient Cortex-A53 cores clocked at 1.74GHz.

It runs on Samsung’s latest One UI with Android 9.0 Pie to boot. This is paired with 4GB/6GB of RAM and 64GB storage which can further be expanded up to 512GB.

During our initial usage, the phone feels powerful and we played a round of PUBG Mobile as well on high settings with HDR on, and it felt very smooth.

The Galaxy A50 will be available beginning from Rs 19,990 for the variant with 4GB of RAM and 64GB storage. As for the 6GB RAM variant, be ready to spend Rs 22,990 for it. It will go on sale starting March 2 across India.