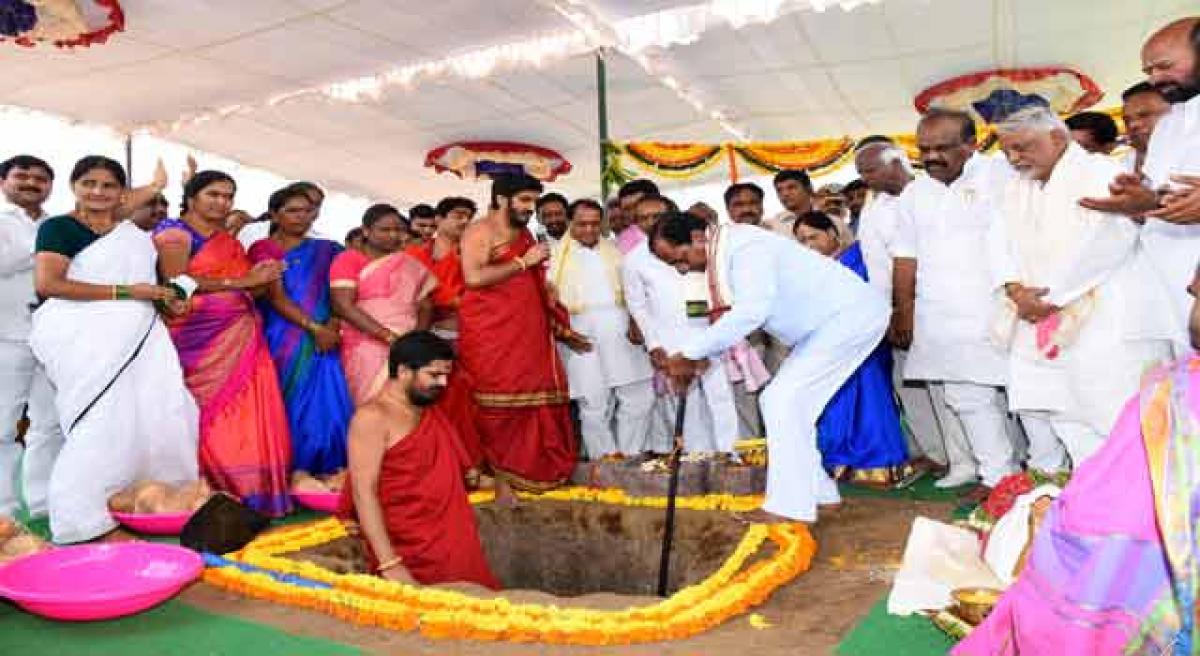 The Telangana Government will use 1,300 tmcft of Krishna and Godavari waters which was allocated to the region in the united Andhra Pradesh. We are not using even a drop extra as is being alleged by some parties and people,” Chief Minister K Chandrasekhar Rao asserted on Monday.

Medigadda (Karimnagar): “The Telangana Government will use 1,300 tmcft of Krishna and Godavari waters which was allocated to the region in the united Andhra Pradesh. We are not using even a drop extra as is being alleged by some parties and people,” Chief Minister K Chandrasekhar Rao asserted on Monday.

TS has rightful share of 1,300 tmcft in united AP

This statement of the Chief Minister assumes importance in the wake of the decision taken by the Andhra Pradesh Government on Monday to write a letter to Prime Minister Narendra Modi seeking his intervention to prevent Telangana government from going ahead with the new irrigation projects till the issues were discussed in the apex council.

AP Chief Minister N Chandrababu Naidu said that both states should sit across the table and resolve all such issues. While dispelling doubts over using rightful share of Krishna and Godavari waters, KCR was critical about Opposition parties, especially the Congress, saying that neither they have a policy nor an idea about irrigation.

Some political parties in Andhra Pradesh are trying to rake up dust over Telangana’s irrigation projects, which is uncalled-for, said KCR in an indirect attack against the YSR Congress chief YS Jaganmohan Reddy, who recently announced that he would sit on a protest opposing Palamur-Rangareddy and Dindi irrigation projects on Krishna river.

After performing bhumi puja for the barrage at Medigadda in Karimnagar district, the CM termed Kaleshwaram Lift Irrigation Project (KLIP) as a boon for people in north Telangana.

This is for what the people in the State longed and fought for separate Telangana. “Wait for another one-and-a-half to two years, the water will be lifted and pumped to Sripada Yellampally project, and thereafter water will be on course to Mid Manair dam, Medak and Hyderabad,” KCR said.

Even before the construction of a barrage each across Godavari at Medigadda, Annaram and Sundilla is completed, a pump house each will come up at these places within 15 to 16 months, and start lifting water to Yellampally project, he added.

Besides quenching the thirst of the upper parts of Karimnagar district, the KLIP will also cater to the irrigation and drinking water needs of Nizamabad, Medak, Hyderabad, Nalgonda and Warangal regions, KCR said.