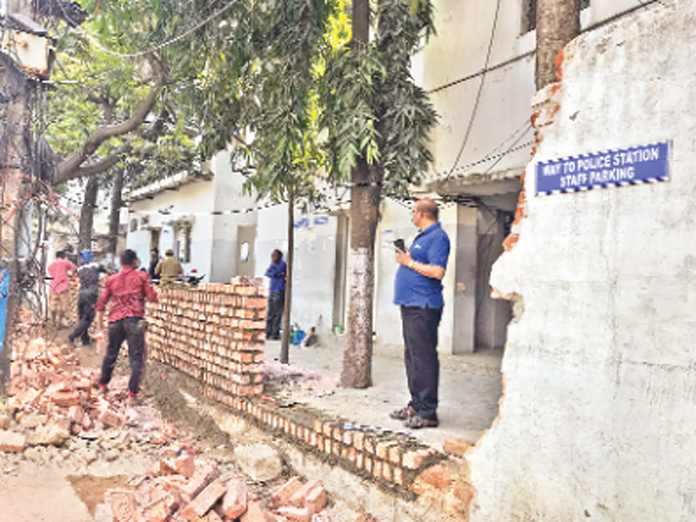 Hyderabad: Confusion created on the wall construction of SR Nagar police station and it became a talk of the town among other police staff and on social media on Sunday.

Rumours spread on social media that the staff of SR Nagar police station demolished the wall in the name of “Vastu dosham” and tried to change the entrance of it. While the construction of the new wall with a new entry into police station, they kept the barricades in the premises and blocked the road which created traffic problems to the locals and the commuters.

The issue raised much more fire among the public and further raised fingers at SR Nagar police. The people who posted the news on social media alleged that because of Vastu, they demolished the wall and trying to construct it by creating problems to the public. Since the SR Nagar police are drawing criticism against them in their working for instances like parking the police van in front of a wine shop and carrying the liquor bottles in the van faced a strong criticism from the higher officials recently.

Speaking on the issue, SR Nagar SHO S Murali Krishna clarified that the wall was very weak, and it was about to fell any time. To rectify it they have demolished it and are constructing the new wall. He further clarified there are no traffic problems for the local people and commuters who are passing through their police station premises.