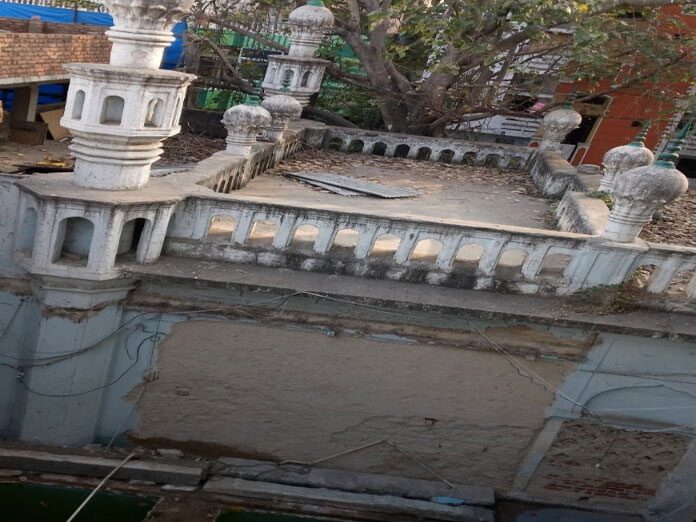 Owing to the lackadaisical attitude of the Wakf Board officials, a 300yearold mosque at Osman Shahi with the same name as of locality is slowly slipping into oblivion, even as some of the attached properties have been already encroached upon Despite best efforts by three generations of a family of caretakers at this mosque

Afzalgunj: Owing to the lackadaisical attitude of the Wakf Board officials, a 300-year-old mosque at Osman Shahi with the same name as of locality is slowly slipping into oblivion, even as some of the attached properties have been already encroached upon. Despite best efforts by three generations of a family of caretakers at this mosque, which has a built-in area of 475 sq yds and total area of about 1000 sq yds, no higher officials from Wakf Board paid a visit to it for several decades.

Following failed efforts to convince the Wakf Board the caretakers raised money to restore portions of the mosque, even as the old structure of the Osman Shahi mosque is slowly getting dilapidated. “It appears as if the Wakf Board has disowned the property, as no committee has been formed to ensure security of the mosque.

Several representations were made to the Wakf Board chairman and matter being pursued regularly no one has paid heed to our cries, even as the parts attached to the mosque encroached upon for some time. Even though regular rentals are collected purportedly by Wakf Board, we are not sure whether the funds are going into the coffers of Board,” said Abdul Raheem, secretary of the Mosque, the third generation of the family taking care of the mosque.

In 2018, the ad hoc committee also represented the matter to the Wakf Board to approve the existing committee for welfare and security of the mosque, but the matter is kept pending. Out of the existing properties including shops and houses, about three have already fell in the hands of encroachers, including the quarter of Moazzan.

“Wakf Board should take control of the mosque lest other attached properties get encroached. We are ready to fulfil the formalities, if the Wakf board approves the existing Adhoc committee,” he said.Owing to dilapidation in the recent years, two of the structures including Imam’s quarter were already crashed to the ground and a big tree has grown at the place, which is now risking the main structure of the mosque.

And if the endangered big minaret falls to the ground, it is likely to damage two to four nearby houses in the vicinity. “The issue can only be solved if the higher officials or Wakf Board chairman visits at least once and examines the situation,” added Abdul Raheem.