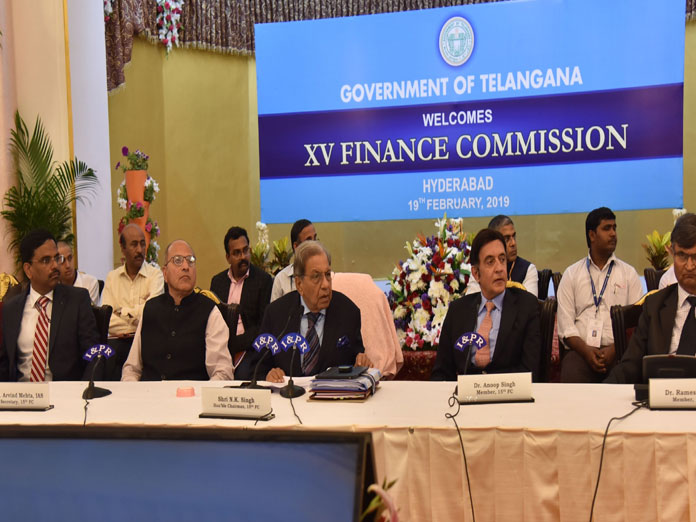 Hyderabad: The 15th Finance Commission asked the State government to submit a medium-term roadmap on fiscal and debt position to consider the demands raised by the State government in the meeting with the Commission. Addressing the press here on Tuesday, Commission Chairman NK Singh said that the State’s performance is better in terms of growth in revenues when compared to some of the State and their revenues. The revenues have the potential to grow at 20 per cent in the years to come, he said.

“We did request (the State), since both the fiscal deficit and the debt to GDP (GSDP) look a little problematic to submit a medium-term roadmap both on debt and on fiscal deficit which is going to cover the period of the award of the 15th Finance Commission. We would like to see your adherence on both debt and fiscal deficit,” he added.

He said the GSDP contribution by districts is uneven as Hyderabad, Rangareddy Medchal-Malkajgiri and Sangaready contribute 52 per cent of the GSDP. Appreciating the irrigation projects taken up by the State government, Singh said the agricultural expert of the commission feels that irrigation initiatives are going to have a huge beneficial impact on agricultural productivity and thereby hopefully on farming community in multiple ways. He said the initiatives will improve livelihood chances of the large-scale agricultural population of Telangana.

The Commission appreciated that the State would be the first Indian State to be able to provide drinking water to every household under Mission Bhagiratha. The Commission has visited 19 State and in most of the States there has been varied conformity both on the debt as per the FRBM (Fiscal Responsibility and Budget Management). Singh said India’s debt to GDP stands at 60 per cent and of which 40 per cent is from the Centre and 20 per cent belongs to the State.