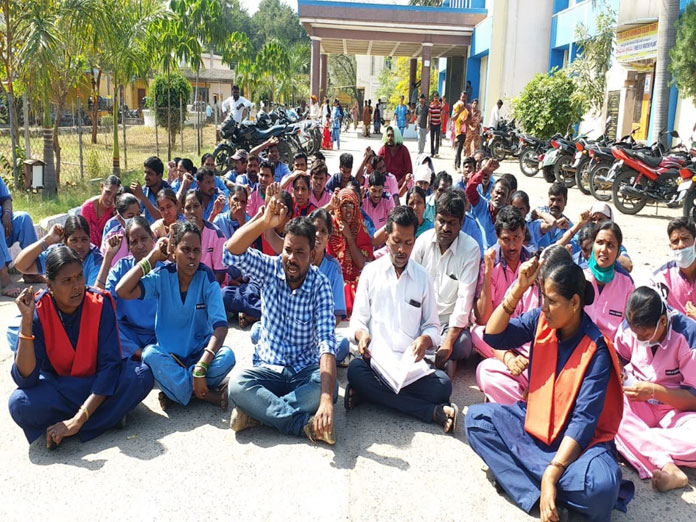 The workers of Government Hospital on Wednesday staged a dharna in front of the hospital gate here, demanding that the government must sanction their wages pending for the past two months

Karimnagar: The workers of Government Hospital on Wednesday staged a dharna in front of the hospital gate here, demanding that the government must sanction their wages pending for the past two months.

Speaking on the occasion, CITU district secretary Bandari Shekar alleged that the government is taking the services of the workers without releasing their salaries for the past two months and also without providing facilities like PF and ESI.

The hospital Superintendent and Agil Group Organisation management are harassing the workers if questioned about the delay in releasing their wages and they are even threatening the workers of removing them from job. He further said that if any worker is absent for one day, the management is marking two days as absent.

The hospital Resident Medical Officer (RMO) Dr K Sridhar came to the dharna site and assured the workers that they will terminate the Agil Group Organisation, which is negligent towards the workers. He added that the issue would be taken to the notice of Vaidya Vidhana Parishad Commissioner for terminating the organisation.

The workers informed the RMO that the management of Agil Group deployed a rowdy sheeter, who is threatening them and abusing them. The workers demanded release of their wages as early as possible along with immediate action against the Agil Group within 10 days otherwise they will intensify the agitation. CITU leaders Adla Ramesh, hospital workers union members Sarala, Sharada, Rajeshwari, Ravi, Ashok and Raju were present along with others.