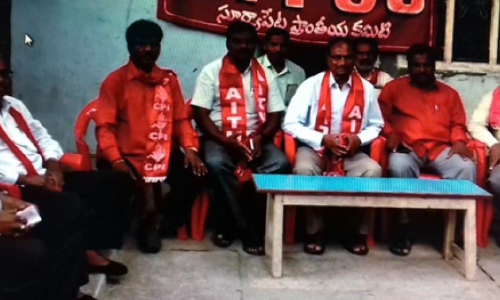 Suryapet: AITUC State General Secretary Ujjini Ratnakar Rao on Monday stated that both the State and Central governments have been impinging on the workers’ rights.

Speaking to media persons, he said following the directions of AITUC central committee the State unit has been conducting a Yatra against central and state governments’ anti-workers and people policies. The yartra was started on the eve of quit India Movement Day on August 9. So far the Yatra was concluded in 21 districts in the state and at present Yatra is going on in Jangoan district.

He criticized both the centre and state over unfulfilled poll promises and expressed concern over the governments’ anti workers and people policies.

He demanded the governments to implement the Supreme Court directions and pay Rs 18,000 as minimum wage to all types of workers, regularise the contract workers and stop amendments to the labour laws.