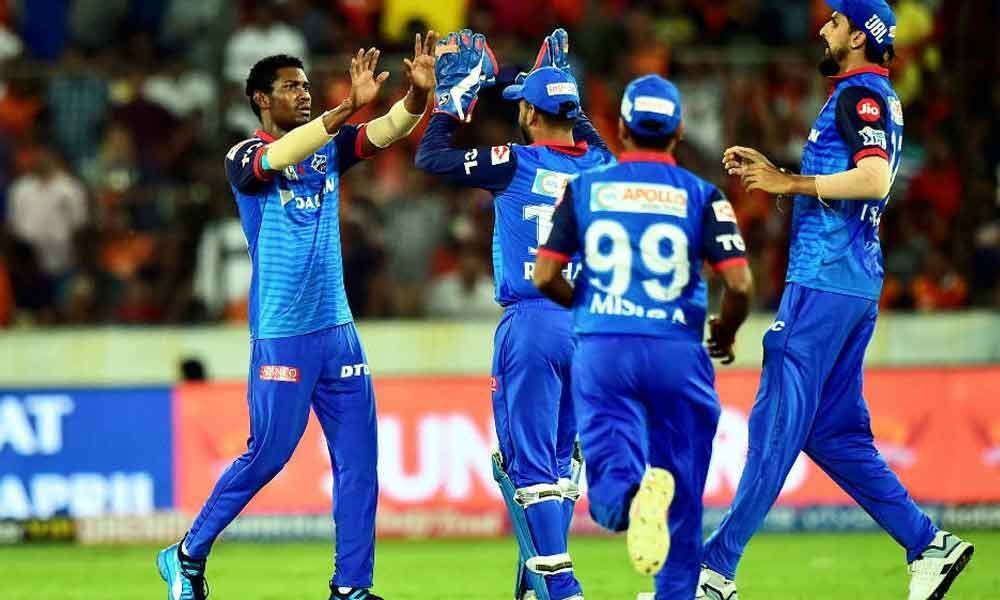 Despite putting up a modest 155, Delhi Capitals' (DC) bowlers came out all guns blazing to defend the target as they folded Sunrisers Hyderabad (SRH) for 116 in 18.5 overs to script a comfortable 39-run victory in their Indian Premier League (IPL) clash at the Rajiv Gandhi International Stadium, here on Sunday.

Hyderabad, April 15: Despite putting up a modest 155, Delhi Capitals' (DC) bowlers came out all guns blazing to defend the target as they folded Sunrisers Hyderabad (SRH) for 116 in 18.5 overs to script a comfortable 39-run victory in their Indian Premier League (IPL) clash at the Rajiv Gandhi International Stadium, here on Sunday.

Hyderabad were comfortably placed at 71/0 in the 10th over before Kasigo Rabada, Chriss Morris and Keemo Paul came from nowhere to rattle the hosts' batting line-up as the trio accounted for all the 10 wickets to fall.

While Rabada was exceptional with figures of 4/22, the South African was ably supported by Morris and Paul, who bagged three wickets each conceding just 22 and 17 runs, respectively.

Chasing the modest target, openers David Warner (51 off 47) and Jonny Bairstow (41 off 31) laid a perfect platform for Hyderabad as the side looked well set at 36 for no loss after five overs. The experienced duo tackled the Delhi bowlers with great skill and and took their side past the 50-run mark in 7.3 overs.

At that stage it seemed the hosts will overhaul the target with ease, but some major twists were yet to follow. Paul sent back a good looking Bairstow before dismissing skipper Ken Williamson (3) to reduce Hyderabad to 78/2 in 11.4 overs.

Warner was a still a major threat before the visitors, but Hyderabad didn't lose hopes as Paul packed back Ricky Bhui (7) cheaply as Delhi keep jolting the home team.

Rabada then came with the big breakthrough, scalping Warner in the 17th over to leave the hosts at 106/4. Warner's departure triggered a batting collapse as Rabada struck in the very next delivery to dismiss Vijay Shankar (1).

With the addition of just four runs to the scorecard, Morris joined the party. Like his compatriot Rabada, Morris too dealt a double blow by dismissing Deepak Hooda (3) and Rashid Khan (0) in back-to-bak deliveries with Hyderabad still 45 runs away from victory.

There was no stopping Morris as he soon accounted for the wicket of Abhishek Sharma (2), leaving Hyderabad reeling at 112/8 in 18 overs.

Rabada then put the final nail in the coffin as the South Africa pacer scalped two more wickets -- Bhuvneshwar Kumar (2) and Khaleel Ahmed (0) -- to hand Delhi a comfortable victory.

Earlier, valiant efforts by Colin Munro (40 off 24) and Shreyas Iyer (45 off 40) helped Delhi post a modest 155/7 as Hyderabad bowlers bowled decently on a good batting track.

Put into bat, Delhi's innings started on a poor note as they lost openers Prithvi Shaw (4) and Shikhar Dhawan (7) with just 20 runs on the board after 3.2 overs. Khaleel accounted for both the Delhi openers.

Munro, however, tried to anchor the Delhi innings and kept the scoreboard ticking. But while trying to up the ante, he gifted his wicket to Abhishek in the eighth over.

With Delhi on 69/3, skipper Shreyas Iyer and Rishabh Pant tried to stablise the ship, taking their side past the 100-run mark in the 12th over.

Bhuvneshwar cut short Shreyas' stay as the Delhi skipper tried to ramp a short delivery over Hyderabad keeper Bairstow but failed in the execution. The slight edge off the bat was gleefully accepted by Bairstow.

Just three balls later, Khaleel scalped his third, packing off Pant (23 off 19) in the 16th over with Delhi tottering at 127/5.

For Hyderabad, Khaleel was the pick of the bowlers with figures of 3/30, while Bhuvneshwar bagged two wickets.