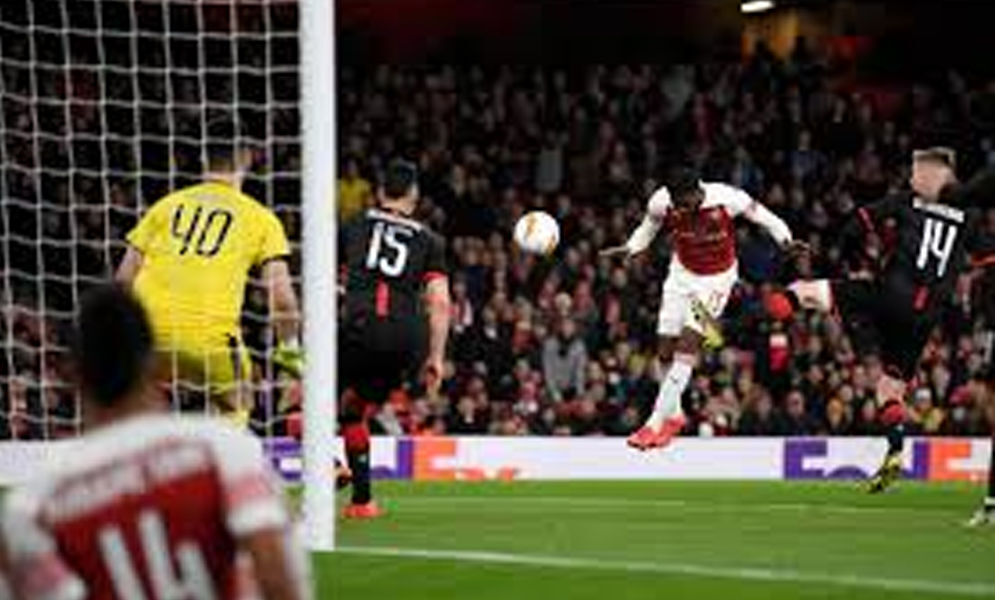 Arsenal striker Pierre-Emerick Aubameyang struck twice as his side beat Stade Rennes 3-0 to reach the Europa League quarter-finals and join Chelsea, who earlier on Thursday thrashed Dynamo Kiev 5-0 with a hat-trick from Oliver Giroud.

LONDON: Arsenal striker Pierre-Emerick Aubameyang struck twice as his side beat Stade Rennes 3-0 to reach the Europa League quarter-finals and join Chelsea, who earlier on Thursday thrashed Dynamo Kiev 5-0 with a hat-trick from Oliver Giroud.

But Inter Milan went out after a 1-0 home loss to Eintracht Frankfurt who made the last eight along with Napoli, Benfica, Slavia Prague and Spanish sides Valencia and Villarreal.

Arsenal had lost the first leg 3-1 against Rennes in France but it took them just 15 minutes to swing the tie their way.

Their Gabon forward Aubameyang tapped home a cross from Aaron Ramsey with just five minutes on the clock and then turned provider 10 minutes later when he crossed for Ainsley Maitland-Niles to double the lead with a header.

Although Rennes hit the post early in the second period, they were mostly toothless and Aubameyang cemented the victory with another goal from close range after 72 minutes.

Arsenal became only the second team in Europa League history to win a tie after losing the first leg 3-1.

Chelsea's French striker Giroud, the competition's top scorer this season, got his seventh and eighth goals before Marcos Alonso tapped in a third just before halftime.

Giroud netted his third goal after 59 minutes when he headed home a Willian free kick and Callum Hudson-Odoi added a fifth to cap an 8-0 aggregate victory for the Premier League side.

The perfect hat-trick – goals with his left and right foot plus a header - was Giroud's first for Chelsea and the win was the London club's ninth in 10 European games this season and their biggest in the UEFA Cup or Europa League.

In the only tie between two former winners of the UEFA Cup, the predecessor to the Europa league, Eintracht stunned three-time champions Inter with a 1-0 victory that took them through.

Luka Jovic, the 21-year-old striker on loan from Benfica, lobbed Inter goalkeeper Samir Handanovic after six minutes and the visitors held on to progress after a goalless first leg.

Napoli had beaten Salzburg 3-0 at home last week and it looked like the tie was wrapped up after 14 minutes when Arkadiusz Milik put them ahead with an acrobatic strike.

But the Austrians, whose unbeaten home run in Europe stretches back 17 games, fought back for a 3-1 win on the night.

Munas Dabbur equalised with his eighth Europa League goal of the season and substitute Fredrik Gulbrandsen made it 2-1 from a low cross by Andreas Ulmer midway through the second half.

Christoph Leitgeb got Salzburg's third in stoppage-time but the away goal ensured Napoli went through 4-3 on aggregate.

It took hosts Krasnodar 85 minutes to revive their hopes of a quarter-final place at the expense of Valencia.

Trailing 2-1 from the first leg, Krasnodar levelled the aggregate score through Shapi Suleymanov's spectacular strike which would have put them through on away goals.

However, Goncalo Guedes broke Russian hearts with a goal in stoppage time to earn the Spaniards a dramatic victory.

They were joined by neighbours Villarreal, who qualified 5-2 on aggregate with a 2-1 win over Zenit St Petersburg.

Gerard Moreno put Villarreal 1-0 ahead after half an hour and Carlos Bacca doubled their lead with his 21st European goal early in the second half. Branislav Ivanovic got a consolation for Zenit in stoppage time.

Sevilla, were knocked out 6-5 on aggregate by Slavia Prague who claimed a thrilling 4-3 extra-time win. The teams were level at 2-2 after 90 minutes to leave the tie at 4-4 on aggregate.

But Mick van Buren and Ibrahim-Benjamin Traore scored for the home team either side of a Franco Vazquez goal for Sevilla to dump the three times Europa League winners out.

Jonas gave the Portuguese a 1-0 lead after 90 minutes to level the score at 1-1 on aggregate before Francisco Ferreira and Alex Grimaldo, with a sensational 30-yard drive, struck in the extra period to earn Benfica a record fifth last-eight spot.

The draw for the quarter-finals and semi-finals takes place on Friday.