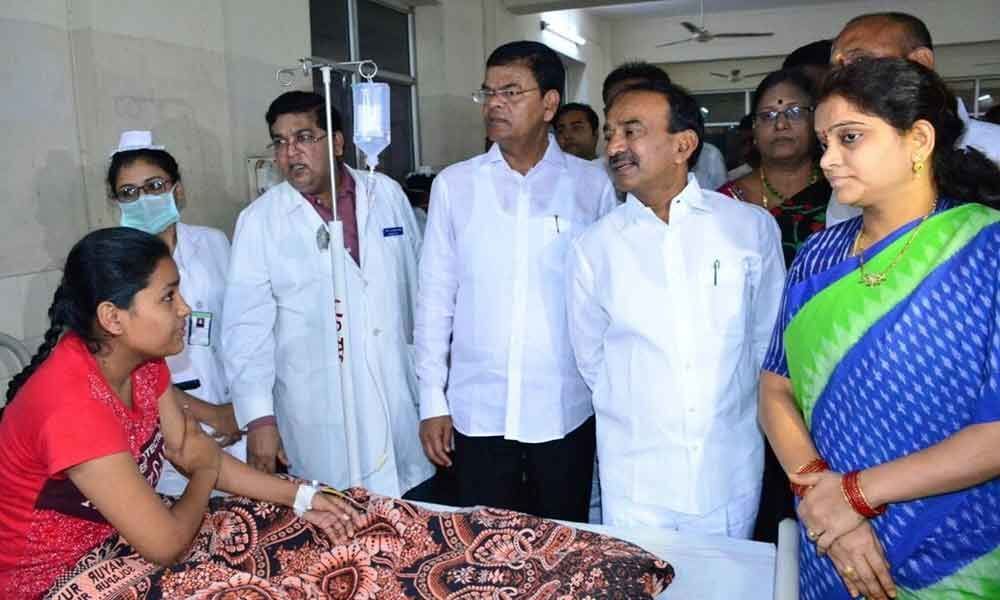 Hyderabad and Bhadradri districts figure in the list of the high-risk districts for dengue and malaria. Health Minister Eatala Rajender has cancelled weekly-offs and leaves of government doctors in view of the prevalent health situation and called for round-the-clock surveillance.

At a high-level review meeting with senior officials of the Health department, the minister took stock of the situation on Monday and followed it up with by personally inspecting the Fever hospital at Nallakunta in Hyderabad on Tuesday.

In view of jump in dengue cases in August, Eatala directed the authorities to put up publicity boards in government hospitals informing that dengue tests and treatments are being done at free of cost.

In view of heavy rush of parents to state hospitals in Hyderabad and districts, the Health Minister directed the officials to increase OP counters, so that waiting time is reduced.

Also, he wanted special queues to be put up for patients who come with a deteriorating health condition or with very high body temperatures.

Eatala was briefed about various steps being taken by the department by Special Chief Secretary Shanti Kumari, Health Commissioner Yogita Rana and other senior officials.

Later, addressing the media, Eatala called upon the people to take preventive measures at their end like using mosquito nets, drinking boiled water, keep surroundings dry to keep away mosquitos.

Measures like fogging, anti-larva operations, extensive drone spraying of chemicals on nalas and lakes, fogging every 15 days in schools, daily review of steps being taken, running evening clinics in Basti Dawakhanas and UPHCs are being undertaken," Eatala said.

Stating that the department would not hesitate to take action against doctors found to be callous at work, the Health Minister slammed Telangana Congress leaders for their hospital visits to criticize the government.

The Health Minister inspected OP counters and in-patient wards at the Fever hospital and assessed the situation. He also interacted with a few patients. He directed hospital superintendent Dr Shankar to take all measures so that patients get the best treatment.

Statistics indicate that dengue cases reported considerable jump in August compared to last month in state hospitals in the city. In Gandhi hospital, 232 patients tested positive while in Fever hospital it was close to 50.