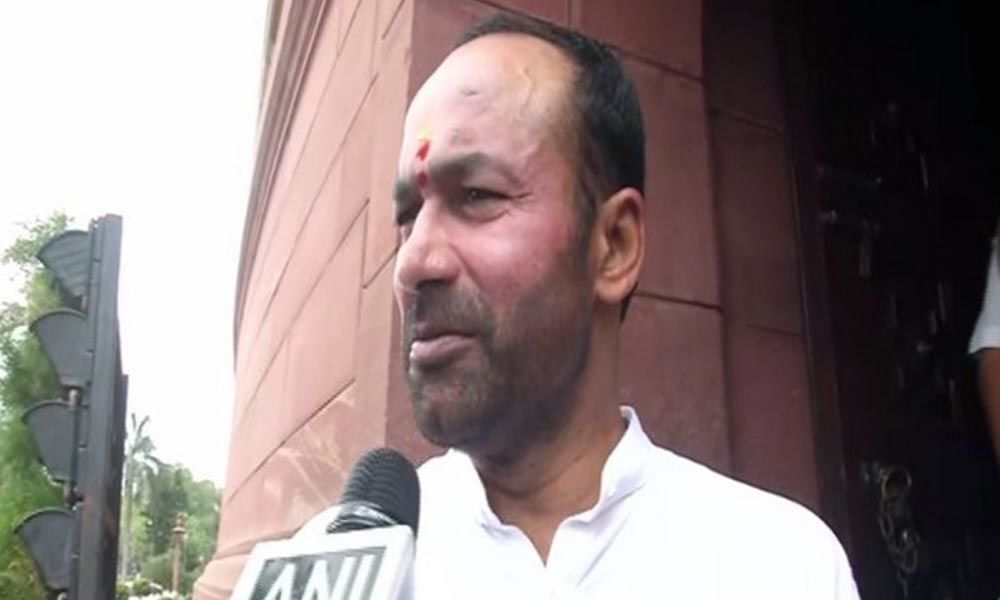 Union Minister of State for Home Affairs G. Kishan Reddy has assured a delegation of Congress party that the Centre would look into the complaints of illegal accumulation and integration of personal data pertaining to citizens of Telangana by the State Government through 'Samagra Vedika' initiative.

Hyderabad: Union Minister of State for Home Affairs G. Kishan Reddy has assured a delegation of Congress party that the Centre would look into the complaints of illegal accumulation and integration of personal data pertaining to citizens of Telangana by the State Government through 'Samagra Vedika' initiative.

Led by All India Congress Spokesperson Dr. Sravan Dasoju, a delegation of Congress leader met the Union Minister of State for Home Affairs at latter's office in New Delhi on Monday. They submitted a complaint accusing Telangana Government of violating Article 21 of the Constitution of India, the Data (Privacy & Protection) Act, 2017, Information Technology Act, 2008, and the dictum of the Supreme Court. He also alleged that the data was allegedly being misused by TRS party for political gains.

Referring to the speech delivered by Principal Secretary of IT Department Jayesh Ranjan in ICAI national conference held in Hyderabad on July 5, 2019, they said that the details of 'Citizen 360' initiative, as revealed by the IAS officer, were both shocking and disturbing as he confessed of State Government using an algorithm which gathered the private data pertaining to various citizens available with various departments of the State and otherwise.

"The statements made by Jayesh Ranjan clearly reflect that the Government of Telangana has illegally indulged in secretive collection, integration and storage of data, more particularly, private and personal information of the citizens without their permission or consent," he said adding that there was no information on the competent independent authority which validated the data collection procedure and verified the accuracy of the data collected. Further, the agency which developed and certified the data algorithms to create digital footprints of the citizens is not known.

"It is apparent that the Government of Telangana is literally tracking every digital transaction of citizens from various Govt departments, private organisations and banks and financial institutions including personal emails, passwords, etc.," Sravan told the Union Minister in his complaint.

Sravan alleged that the Telangana Government appeared to have dubious intent to utilize this massive people's data for political or private purposes and hence, without any prior consent or without any specific reason has indulged in collation and storage of large amount of private information of individuals/citizens. "Innocent citizens, as a part of their day-to-day general transactions and requirements, furnished information before various governmental and private entities without knowing that the Government of Telangana is indulging in preparing the digital foot prints with the help of unknown algorithms," he said.

Describing the initiative as completely arbitrary, illegal and contrary to the law established by the Supreme Court, he said that the Supreme Court, in its judgement pertaining to Aadhar Law delivered in September 2018, had categorically opined that the right to privacy can't be impinged without a just, fair and reasonable law. "The actions of the Telangana Government in collection of data lack transparency as it failed to establish the purpose of creation of the tool/application. They violate the Fundamental Rights of the Citizens, more particularly their rights enshrined under Article 14 and 21 of the Constitution of India," he said.

The Congress leader also alleged that the Telangana Government was trying to create a parallel Aadhar of every citizen of the State without their consent or free will.

He also alleged that the Government of Telangana did not implement adequate data protection and security measures and no periodic data security audits seem to have been conducted. "Privileged access has been given to private and political persons and citizens' personal and confidential data has landed into the hands of people with vested interests including TRS party. "In nutshell while there is a need to probe and validate this aspect, the callous or premeditated actions of the Government of Telangana cause a potential threat to the personal information of the citizens and their right to privacy," he alleged.

Sravan also referred the mention of 'Samagra Vedika' in the Economic Survey Report published by the Government of India which claimed that the Telangana Govt linked around 25 existing government datasets using a common identifier - the name and address of an individual.

The Congress leader said that the actions of the Government of Telangana are also contrary to the principles established under the Information Technology Act, 2000. Sec. 72A of the IT Act, 2000.

"The present Government of Telangana has been repeatedly accused of spying and intruding into the private data of various citizens. Therefore, the past allegedly suspicious conduct of the Government of Telangana and its present actions clearly post a threat to sensitive and confidential data of various citizens. TRS party has been given privileged access so that it could copy the entire citizens' data and misuse the same in forthcoming Municipal Elections for its political gains," he alleged.

Giving reference of cases registered by Telangana Police against IT Grid India Pvt Ltd and Telugu Desam Party in March this year, Sravan said that both were accused of misusing data collected under an initiative called 'Seva Mithra' for political purposes. "What is the guarantee that the ruling TRS Government has not indulged in similar manipulations of the data collected through "Citizens 360" initiative? Why that Telangana Government can't be prosecuted as in aforesaid IT Grid Case?" he asked.

Sravan said that the huge amount of personal information of the citizens seems to be in the possession of the Government of Telangana and the TRS party in its private capacity illegally, posing grave threat and danger to the citizens of the State of Telangana. Therefore, he demanded that Union Ministry of Home Affairs appoint and conduct an independent and fair investigation into the actions of the Government of Telangana and take all necessary steps to protect the information and rights of the citizens.