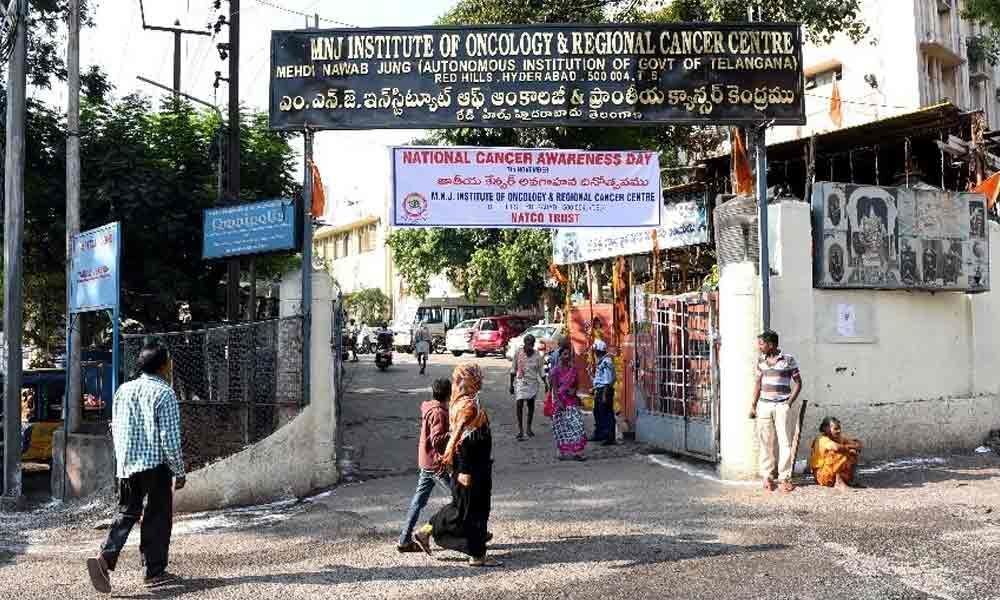 Collection of user charges from public visiting MNJ Cancer Hospital for treatment is leading to a row with several complaints pouring in regarding this issue for the last few weeks.

Hyderabad: Collection of user charges from public visiting MNJ Cancer Hospital for treatment is leading to a row with several complaints pouring in regarding this issue for the last few weeks. Also, poor patients, who are covered under Aarogyasri are not being spared.

The hospital staff is reportedly charging anywhere between Rs 100 and Rs 1200 for basic tests and Rs 2,000 to Rs 2,500 for CT Scan, MRI Scan etc. Also, handwritten bills are being issued creating doubts on transparency in money collection process.

Doctors Associations namely Telangana Government Doctors Association and political parties took up the issue with higher-ups in the Health Department, but no concrete action is taken to stop the brazen violation of rules.

Freshly, Healthcare Reforms Doctors Association (HRDA) submitted a memorandum in Principal Secretary (Health) peshi on Tuesday over illegal collection of user charges at MNJ hospital. HRDA president Dr K Mahesh Kumar wanted to know if MNJ was given permission, through any GO, to collect user charges from patients. Even patients undergoing Ultrasound Scan are being asked to pay money and then only they are allowed for the test, he said.

Meanwhile, a doctor under the condition of anonymity said attempts to get information under RTI were not fruitful as no relevant information was furnished. "Only autonomous institutions like NIMS can collect user charges and no other hospitals like Osmania General Hospital, Gandhi Hospital. Authorities should make it clear if MNJ is an autonomous institution or not," the doctor said.

A few days ago, a CPI(M) delegation complained to senior health officials over how user charges are being collected illegally from Aarogyasri patients. Handwritten bills given to the patients after the payment of money was also submitted as evidence. This one issue, lack of medicine stocks including emergency medicines is affecting day to day treatment services at Tertiary hospitals in twin cities for last couple of months.

There is a shortage of stocks of Augmentin, Pantop, Meropenem, Piptaz, Monocef, Vancomycin, Dopamine, even suture materials and spirit bottles are also not adequate to meet the requirements. Doctors stated that due to lack of medicine stocks, patients are forced to visit private pharmacies. While some of them are buying medicines from private medical shops, the poor ones are not in a position to spend thus skipping the medication which is taking a toll on their health even leading to deaths, doctors said.