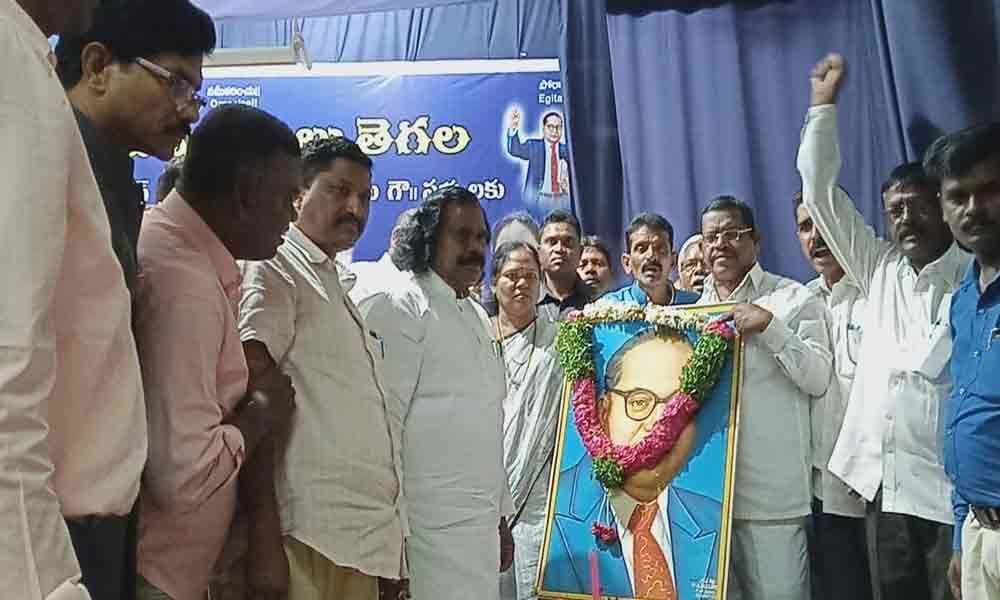 Telangana SC and ST associations organised a programme to felicitate national ST Commission chairman Nandakumar Sai, who came to Telangana on a visit, here at Sundaraiah Vignana Kendram on Friday

Baghlingampally: Telangana SC and ST associations organised a programme to felicitate national ST Commission chairman Nandakumar Sai, who came to Telangana on a visit, here at Sundaraiah Vignana Kendram on Friday, but the programme was disrupted by tribal leaders who were protesting against the illegal mining of uranium in Nallamala forest.

The organisers intended to felicitate Nandakumar and other members of the Commission Harshad Bai Vasava, Harikrishna Damar, Maya Chintavan Lunathi. The programme was launched by Nandakumar garlanding the portrait of Dr Ambedkar and lighting a lamp.

As the chief guests were about to take seat, tribal leaders Ram Naik, Dharma Naik and Ganesh Naik along with their followers started raising slogans against the Commission and demanded them to take measures to prevent uranium mining in tribal areas of Nallamala forests.

They also demanded the members of Commission to tour the tribal areas where mining was to be taken up, instead of attending felicitation programmes. The SC and ST association leaders tried to convince protestors and asked them to submit a memorandum to the Commission members. As they continued raising slogans and protests, Nandakumar along with other members left the venue disturbed by the protests.

Later, speaking to media, RTC SC, ST employee welfare association leaders who took initiative to organise the programme expressed dissatisfaction over the incident. They said that the event was held primarily to give opportunity to SCs, STs and other downtrodden people to present their cases before the Commission.

They expressed their anger at the leaders of Lambadi rights association leaders for their deliberate attempts to disrupt the program. Condemning the act, Telangana Praja Erukala Sangham president K Kumar said the programme was deliberately disrupted with selfish interests and an opportunity to discuss SC and ST issues with the commission was lost. It is unfortunate that even some political parties too supported the protestors, he added.