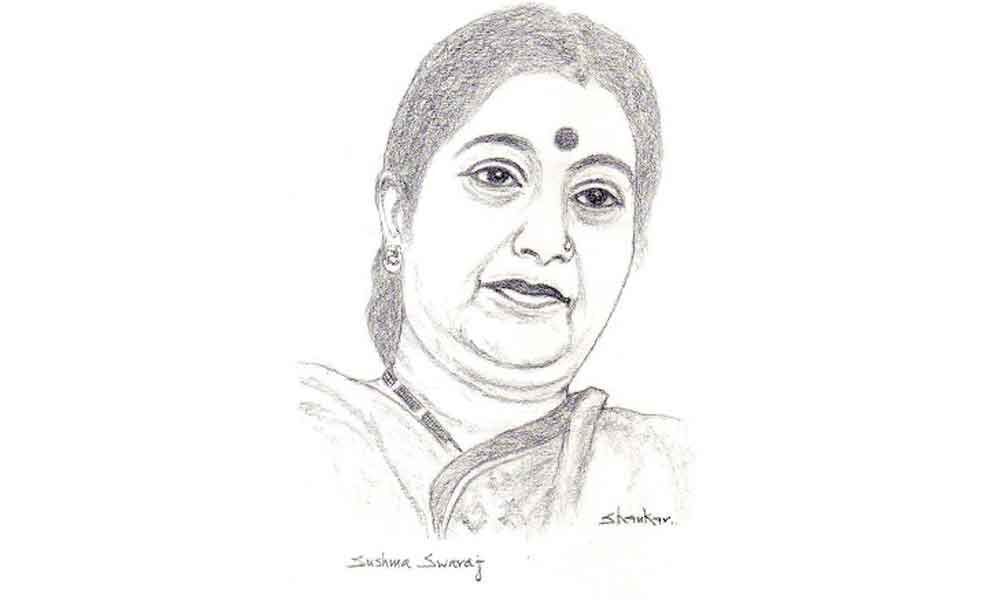 Sushma Swaraj will be remembered as a bright, humane and pro-people politician who practised value-based politics throughout her life

Hyderabad: As far as Telugu people are concerned, Sushma Swaraj was the face of BJP national leadership. She described herself as 'Chinnamma' of Telangana people, while conceding the role of 'peddamma' to Sonia Gandhi, chairperson of United Progressive Front (UPA), who was instrumental in creating a separate state of Telangana. Sushma Swaraj was the senior most BJP leader to consistently support Telangana statehood demand. Sushma's demise comes as a shock to the nation.

Sushma started her political career as a leader of Vidyarthi Parishad, while studying law at Punjab University. She was the youngest minister in the country, when she joined Haryana cabinet in 1977. She was a socialist at heart, and she is immensely influenced by former Prime Minister Chandrashekhar.

Sushma Swaraj played an active role in the movement headed by Lok Nayak Jayaprakash Narayan in 1970s. She was the Chief Minister of Delhi for a brief time. But, her stint as foreign minister was remarkable.

Tweeter-savvy Sushma took the external affairs to the common people when she was at the helm.

Sushma was known for her gift of the gab. An excellent speaker, she dominated the proceedings in the Parliament, in Lok Sabha as well as Rajya Sabha. She used to speak in chaste Hindi during her verbal combats with the Congress leaders.

The lady had a peculiar relationship with Sonia Gandhi. She was Sonia's rival in Bellary by-election to Lok Sabha. She lost the election, but she made a mark as a gutsy leader who could take on the then Congress President.

Sushma was criticised for getting help from tainted mining tycoon Janardhan Reddy. But, it did not stick to her.

Sushma was an emotional person. She takes everything to the heart. People who had seen her or followed her on Twitter closely would agree to that

After 1998 and 2004 elections, when Sonia Gandhi was staking her claim to the Prime Ministership, Sushma declared that if an Italian is allowed to become PM, then she would protest by wearing white sari, unknotting her hair and eschewing food. It was a sensational stand that shocked the nation."Don't we have any Indian to rule the country even after we had ended the British rule in the country?" She commented on prospect of Sonia Gandhi becoming the prime minister. Sushma went on to say that she would sleep on the floor and eat only peanuts if any foreigner took the helm. Sushma's words became controversial. But, the episode tells a lot about the person she was

It was a political stance. Otherwise, she was known for her good behaviour and etiquette. She was soft spoken and affectionate. She was truly a popular leader who strove all through her career to help the underdog.

Sushma was steadfast in her commitment to the ideology of the BJP. She was not particularly comfortable with Prime Minister Modi. She was essentially groomed in Vajapayee's school of liberal politics. She was one of the contenders for the top political job in the country, after LK Advani.

Sushma Swaraj will be remembered as a bright, humane and pro-people politician who practised value-based politics throughout her life.