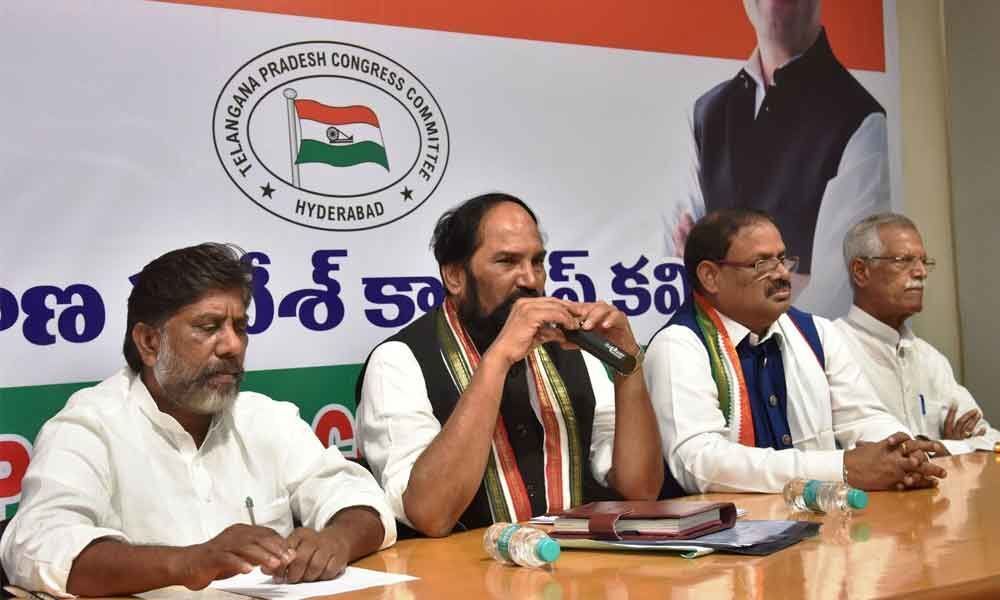 Hyderabad: Telangana Pradesh Congress Committee has decided to launch agitations against the government for not keeping its promises it made to the people and to protest the shortage of urea and spread of viral fevers.

Telangana Pradesh Congress Committee (TPCC) president and MP N Uttam Kumar Reddy said on Sunday the party would launch its membership drive in the State from September 15 from Mahbubnagar.

Addressing a press conference, along with AICC in-charge for the Congress in the State R C Khuntia and CLP leader in Assembly Mallu Bhatti Vikramarka, Uttam Kumar Reddy said that those getting Congress membership would also be provided with life insurance coverage.

The responsibility to work out the life insurance coverage scheme had been assigned to CLP leader Mallu Bhatti Vikramarka and ex-MP Konda Vishweshwar Reddy.

He said as many as 10 leaders would be sent to All India Congress Committee (AICC) Headquarters for training to propagate the Congress policies and later these leaders would supervise the training programming in the State.

He said the BJP had played no role in merger of Hyderabad State with Indian Union. The BJP was not even connected with Telangana movement. He said it was the Congress which merged Hyderabad with Indian Union in 1948 and the same party granted the statehood for Telangana State in 2014.

The TPCC president said the public health system had collapsed in Telangana State with thousands of people suffering from seasonal and other viral diseases.

The Congress leaders would visit district hospitals across the State on September 9 to inspect the facilities available for the poor patients.

He also slammed the TRS government for the shortage of urea. He said the farmers were being forced to stand in long queues for several hours to get urea. One farmer had lost his life while standing in a long queue for urea.

Uttam said that the TRS government had promised to provide to farmers Rs 5,000 per acre under Rythu Bandhu during kharif and rabi seasons each. However, nearly 50 per cent of farmers are yet to get the beneift.

Similarly, he said that the promise of waiving crop loans up to Rs 1 lakh remained unimplemented. To press for fulfilling of this promise, he announced that the Congress party would organise State-wide protest on September 11 at 11 am. committee headed by former PCC President V Hanumantha Rao had been constituted to finalise the agitation schedule.

He alleged that the enhanced Aasra pensions were not released properly. Further, he said that the land records were not properly uploaded in the Dharani Website.

He said a committee would be constituted to identify the discrepancies in Dharani website.

Khuntia said a committee, headed by TPCC president, would probe into the irregularities in the construction of irrigation projects.