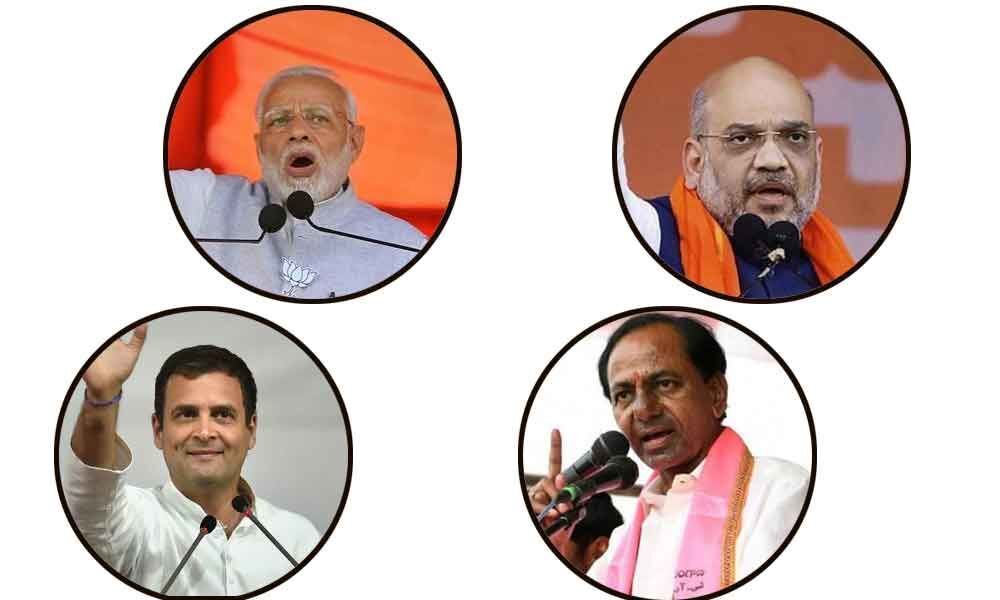 Hyderabad: All the key parties in Telangana are braced up for high voltage poll campaign from Saturday with Prime Minister Narendra Modi, Congress president Rahul Gandhi, BJP national president Amit Shah, Chief Minister K Chandrashekar Rao, Union ministers and several national leaders of the BJP and Congress are set to address a series of public meetings in the state during the next two weeks.

On Friday, the Prime Minister will address a public meeting in Mahbubnagar, while KCR will be addressing a public meeting at L B Stadium in Hyderabad. These two meetings assumed importance as KCR has been talking about BJP-mukt Bharat. What stand the PM would take against the state government remains to be watched.

It may be recalled that during the Assembly elections also both these leaders had addressed meetings almost simultaneously and KCR had thrown a challenge for open debate on power situation in the state when Modi said that farmers were suffering due to shortage of power.

Rahul Gandhi is scheduled to attend three rallies and address public meetings on a single day on Monday (April 1). He will be addressing meetings in Zaheerabad, Nalgonda and Nagarkurnool Lok Sabha segments. On the same day, Modi would take part in a poll rally in Hyderabad.

This would be followed by two public meetings to be addressed by Amit Shah on April 4 and will participate in roadshows at Nalgonda and Hyderabad on April 6.

As per the schedule, KCR will address public meetings covering 11 Lok Sabha segments. On his first day poll campaign, the TRS chief will address rallies in Nalgonda and Hyderabad. He will cover at least three MP segments during his weeklong busy campaign schedule.

Since the ensuing Lok Sabha elections are crucial for both TRS and Congress, all the contestants of the two parties have been instructed to organise village-level meetings and rallies involving party cadre.

TRS MLAs were entrusted with the responsibility of galvanizing the cadre to make success the meetings. Congress and BJP in-charges of Assembly constituencies would oversee the arrangements for the election rallies.