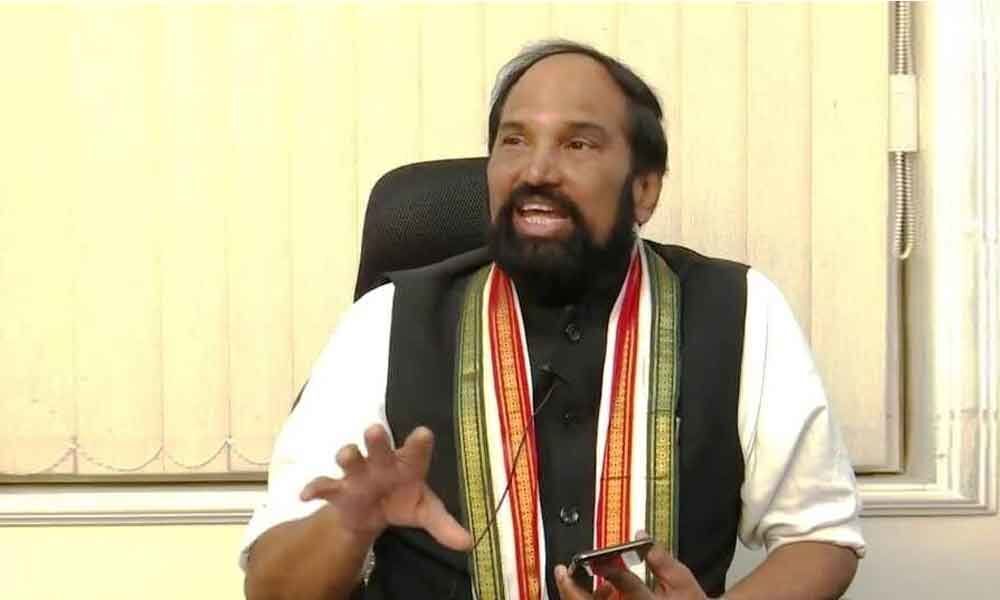 TPCC president and MP N Uttam Kumar Reddy says the Congress party has been exposing the corrupt practices and mass irregularities of the TRS government for the last five years. However, Prime Minister Narendra Modi or his government never took note of our allegations, he adds

Hyderabad: Telangana Pradesh Congress Committee (TPCC) president and MP N Uttam Kumar Reddy on Monday accused that both the BJP and TRS were enacting fake drama of political rivalry only to mislead people and damage the Congress party.

"Congress party has been exposing the corrupt practices and mass irregularities of the TRS government for the last five years. However, Prime Minister Narendra Modi or his government never took note of our allegations. Similarly, K Chandrashekar Rao has always behaved like a true 'Modi Bhakt' and never criticised the BJP government," Uttam said.

Uttam said the BJP and TRS are secret allies in Delhi and were enacting the rivalry drama in Telangana. He challenged BJP leader Nadda to make his party's government at the Centre order a CBI probe against TRS chief K Chandrashekar Rao, if BJP was serious against exposing the corruption in TRS government.

He pointed out that the TRS supported the BJP government since 2014 and Rao was such a great fan of PM Modi that when the latter visited Telangana, the Chief Minister just wanted a little space in Modi's heart and nothing else.

The TPCC chief said the Congress party has continuously exposed the irregularities and corruption by Chandrashekar Rao regime in Mission Bhagiratha, Mission Kakatiya and other irrigation projects.

Uttam said the BJP leaders were daydreaming of coming to power in Telangana after the party won four Lok Sabha seats. He said BJP would never gain strength in Telangana as Modi government did nothing for the State in the last five years.

The TPCC chief announced that a delegation of senior leaders of Congress party would visit Tummidi Hatti in Adilabad district on August 25 to review the status of availability of Godavari waters.

He said Chandrashekar Rao government has wasted thousands of crores of public money by constructing the barrage at Medigadda instead of Tummidi Hatti by re-designing the Kaleshwaram project.

Uttam Kumar Reddy also warned against harassment of Congress workers by TRS leaders and a few police officials. Asking the party workers not to worry, he promised that the Congress party would defend them under all circumstances.

He was informed that one MPTC of Congress party in Devarkonda Assembly segment attempted suicide due to harassment by one police sub-inspector. He said a representation was immediately made with Director General of Police and concerned Superintendent of Police. He said that SI has reportedly been transferred.

The TPCC chief also informed that 75th birth anniversary celebrations of former Prime Minister Rajiv Gandhi would be organised at a grand scale across Telangana on August 20 (Tuesday). He said that the celebration, in different forms, would be held continuously for the next few months.

He also informed that the AICC was organising a grand celebration of Rajiv Gandhi's birth anniversary on August 22 at Indira Gandhi Indoor Stadium in New Delhi.