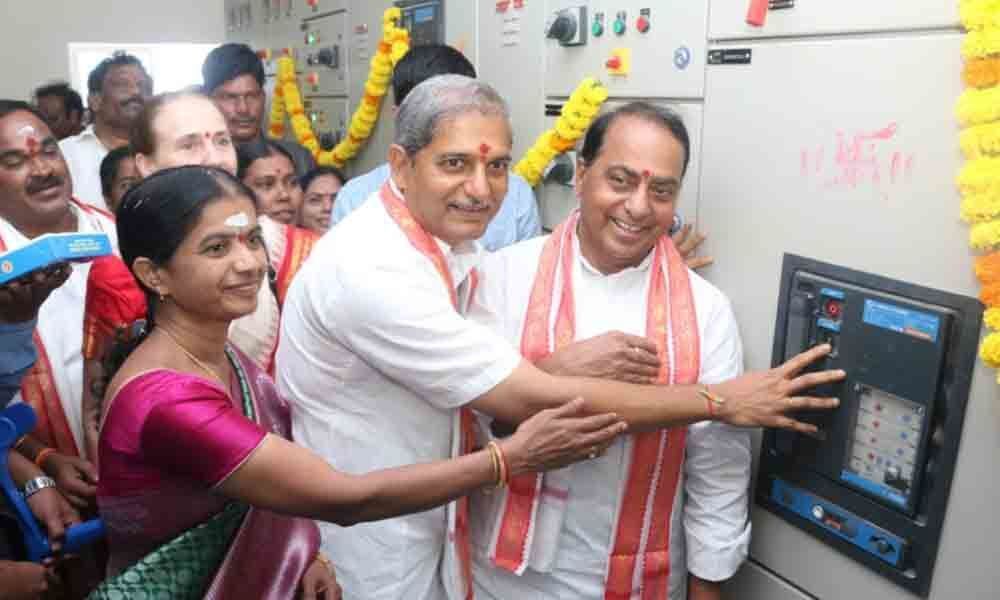 Vemulavada: Endowments, Forests and Environment Minister Allola Indrakaran Reddy said the famous Sri Raja Rajeswara Swamy temple in Vemulawada will be developed wonderfully. Along with MLA Ch Ramesh Babu, the Minister released Kaleswaram water from Mid-Manair reservoir to Gudicheruvu by switching on the motor pump on the outskirts of Sunkepalli village in Rajanna Sircilla district on Thursday. He later offered prayers at Gudi cheruvu.

Speaking on the occasion, the Minister said Chief Minister K Chandrashekar Rao is determined to develop the temple, which is one of the famous temples in the Telangana State. He said the government had sanctioned Rs 400 crores for the development of the temple. Along with releasing Kaleshwaram water into the Gudi Cheruvu by lifting irrigation project and the water will be supplied to Dharmagundam of Vemulwada temple round the year. The construction works of mini tank bund along with beautification works of temple town are going on at a brisk pace and will be completed within the time limit, he informed. With Kaleshwaram project, as many as 14 districts will water for irrigation and drinking water purposes. At present, two TMC water will be lifted from Kaleshwaram project and in the coming up days, one more TMC water will be lifted to fulfill the requirements and to transform the entire Telangana into a fertile land, he added.

Indrakaran Reddy said under the leadership of Chief Minister K Chandrashekar Rao, enormous development is taking place in the State. With schemes like Rythu Bandhu, Kalyana Lakshmi, Shaadi Mubarak, Asara pension, the lives of many people in the State has changed.