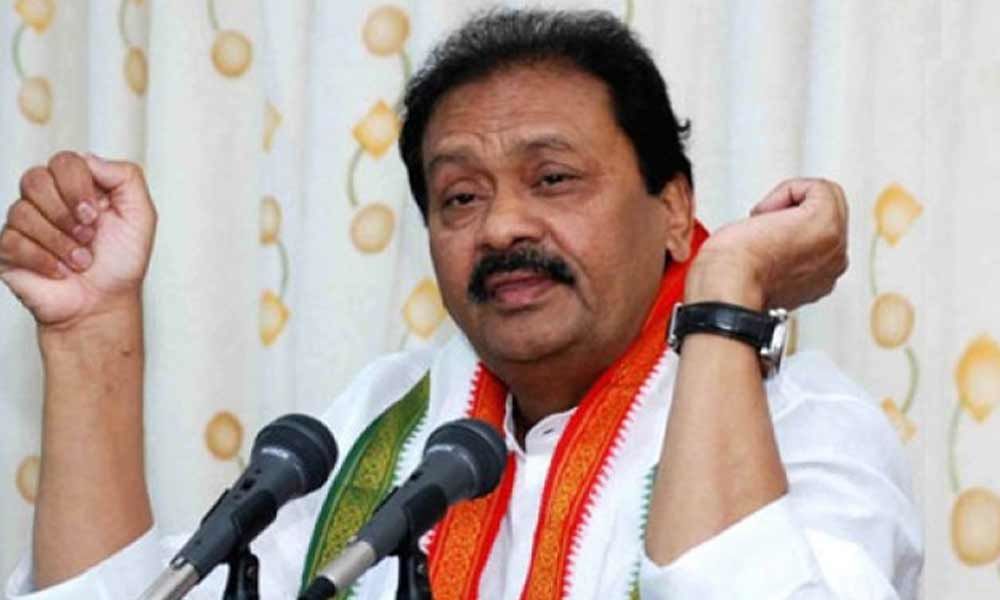 Former Leader of Opposition in Council and Congress senior leader Mohammed Ali Shabbir has alleged that the TRS Government has failed to protect Wakf properties in Telangana State.

Hyderabad: Former Leader of Opposition in Council and Congress senior leader Mohammed Ali Shabbir has alleged that the TRS Government has failed to protect Wakf properties in Telangana State.

He was speaking to media persons after submitting a memorandum to Telangana State Wakf Board Chairman Mohammed Saleem following a dharna held by the Congress workers at Haj House, Nampally on Monday. He said that the Congress party had staged a protest over encroachment of Wakf properties belonging to Toli Masjid. He said that the Wakf Board Chairman had given an assurance that since the term of present Managing Committee has ended in December 2018, Toli Masjid and its 27 acres of property would be taken under Direct Management of Wakf Board today itself. He also assured to demolish all illegal structures and restore encroached land.

Details were also sought with regard to the case registered against senior officials of Wakf Board in February this year for issuing fake NOCs to alienate prime Wakf land in Malkajgiri and Shaikpet. Shabbir Ali urged the Wakf Board chief to ensure that those involved in the fake NOC case get severe punishment.

Shabbir Ali reminded that the TRS, in its manifesto for 2014 elections, had promised to give judicial powers to Wakf Board. It had also promised to restore encroached properties within 100 days after coming to power. "Today, TRS Govt completed 1848 days in power. But not an inch of encroached Wakf land has been restored. Chief Minister K. Chandrashekhar Rao had given an assurance that the vacant land in Manikonda Jagir would be returned to Wakf Board. However nothing has been done in this regard," he said.

The former minister informed that there are 33,929 Wakf properties with combine area of 77,538.07 acres. Of this, about 57,423.91 acres or nearly 75% of total Wakf lands are under encroachment. He said so far no steps have been taken by the State Government to restore any Wakf property in the State. In December 2014, Wakf Board had constituted a 3-member legal advisory committee headed by retired High Court judge Vamana Rao, retired district and sessions judges E. Ismail and Syed Abdullah to study the nature of cases pertaining to Wakf properties across the State. "The report is not yet made public. No one has an idea on the recommendations made by the committee and how many of them have been implemented by the government," he said.

Shabbir informed that as many 18 cases of Wakf property are pending in Supreme Court and 12,628 are pending in High Court. However, he said these cases were not being pursued with sincerity. In many cases, he said dispute was between Revenue Dept and Wakf Board. "Why State Government is not making the Revenue Dept withdraw cases against Wakf Board as it was done by previous Congress Government," he said while citing the case of Dargah Ishaq Madani in Devada village of Visakhapatnam where the previous Congress Govt made Revenue Dept withdraw the case to restore 5,000 Acres of land to Wakf Board. Similarly, he said 50 acres of Wakf land in Pahadishareef was restored to Wakf Board under Congress rule.

The Congress leader said that KCR regime would be remembered for destruction and loss of Wakf properties. Hundreds of Wakf properties have been lost due to deliberate negligence of TRS Govt. He said properties belonging to Toli Masjid have been encroached upon and no action has been taken. Similarly, he said the precious land belonging to Chinti Shah Masjid was not restored despite waging a legal battle. TRS Govt also committed the sin of demolishing Ek Khana Masjid in Amberpet.

Shabbir Ali also furnished documents showing how Wakf properties were lost under the regimes of TDP and TRS. He said Wakf land for airport was acquired by TDP Govt in 2002. Similarly, he said all allotments of land in Manikonda Jagir were made during the TDP Govt. He said that the previous Congress regime did not alienate a single yard of Wakf Board and restored thousands of acres. "Previous Congress Govt has not only developed, but added Wakf properties. Present Haj House building was constructed by Congress Govt. In 1993, Razzak Manzil was acquired and the new building was constructed later. We also acquired two more properties adjacent to Haj House by paying a cost of several crores. Many Wakf commercial complexes were constructed across Andhra Pradesh," he said.

Shabbir Ali said on Novemer 6, 2017, CM KCR had ordered the seizure of Wakf Board office. All records were seized and it was announced that some enquiry has been ordered. "CM KCR should explain the reasons why Wakf Board office was sealed that day. How many scams were unearthed and who was found guilty? Or, was it an attempt by TRS leaders to steal or misplace original files of Wakf properties?" he asked.

"KCR Govt is only cheating the Muslim community since 2014. Muslims did not get promised 12% reservation in jobs and education. Minorities Welfare is now limited to Iftar party and distribution of sarees or a pair of clothes worth Rs. 200 each. Residential schools were originally established by Congress Govt and TRS Govt only increased their numbers. Except for one or two symbolic schemes, nothing is being done for minorities' welfare. Muslims of Telangana are being exploited by the TRS Govt and KCR," he alleged.