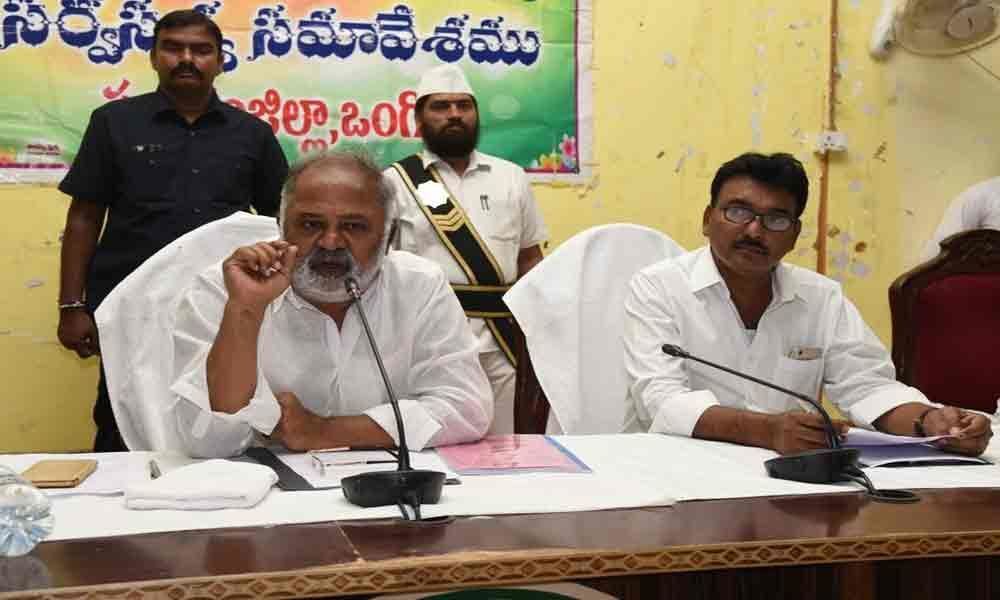 The members participated in the general body meeting of the Prakasam Zilla Parishad on Friday passed a resolution requesting the state government to complete the construction of Poola Subbaiah Veligonda Project on war footing, announced the ZP Chairman Edara Haribabu.

Ongole: The members participated in the general body meeting of the Prakasam Zilla Parishad on Friday passed a resolution requesting the state government to complete the construction of Poola Subbaiah Veligonda Project on war footing, announced the ZP Chairman Edara Haribabu.

He said that the resolutions were passed asking the Chief Minister to start works of Ramayapatnam port and announcing the Prakasam district as a backward district. He said that they asked the government to continue works of NIMZ at Kanigiri, Donakonda Mega Industrial Hub, IIIT-Ongole in the resolutions along with the suggestion to see a major port is constructed with central government funds at Ramayapatnam.

MLA Karanam Balarama Krishnamurthy requested the government to take a special interest in completion of the irrigation projects in the district. He asked the RWS department to supply water to all notified and non notified tanks in the district to avoid drinking water problems to the public.

He said that he observed drinking water problem in several places in Chirala assembly constituency and asked them to dig new bore wells in the area. He also said that a number of electricity service lines are passing through houses at reachable height and asked the electricity department to address the issue immediately.

The Tangutur MPP Chadalavada Chandrasekhar complained that after the formation of the new government, they are cancelling the works under the MGNREGS and removing field assistants from the jobs. He suggested the officials to stop practising such methods.

Naguluppalapadu MPP Muppavarapu Veeraiah Chowdary appreciated the DWMA staff for implementing MGNREGS scheme so well so that the district received the second position in the country. He advised them to plant trees and take initiation to protect them also and release bills for works taken up under the scheme.