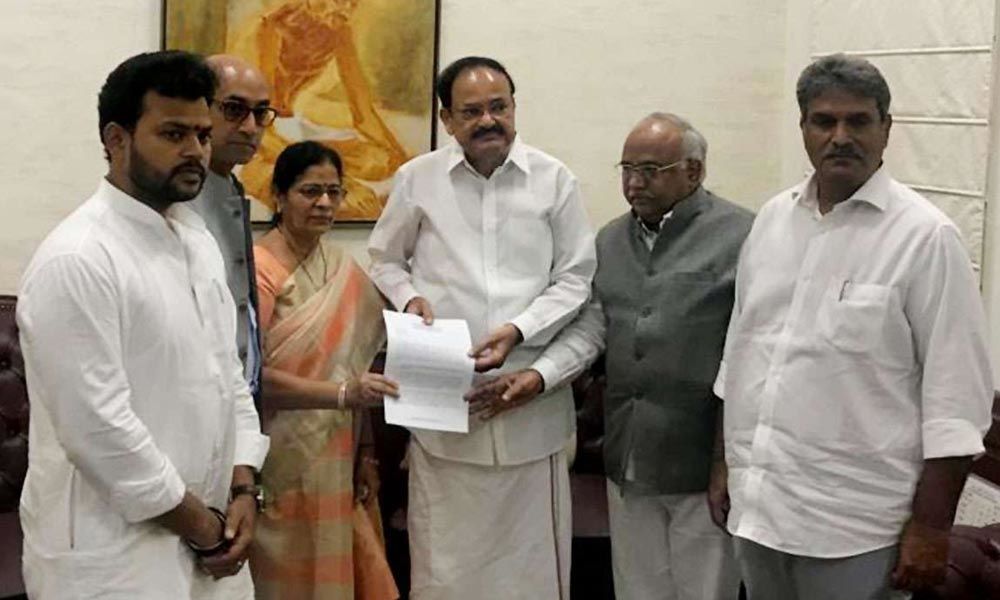 Five TDP MPs met Vice President Venkaiah Naidu to challenge the defection of their four ex-colleagues to the BJP on June 20, 2019.

On Friday five TDP MPs met Vice President Venkaiah Naidu to challenge the defection of their four ex-colleagues to the BJP on Thursday, June 20, 2019. The TDP MPs - three from Lok Sabha and two from Rajya Sabha members - met in Delhi.

The letter which challenges the defection of four TDP MPs to BJP states, "We have come to know through media reports that four Rajya Sabha members have submitted a so-called resolution citing Tenth Schedule, paragraph 4, Point 2 of the Constitution of India, claiming that the TDP Legislature Party in the Rajya Sabha is merging with the BJP. However, as per Tenth Schedule in Constitution of India, any merger of political parties must take place at the organizational level."

"This is to bring you to your kind attention that there has been no merger of the TDP with the BJP I would like to bring to your kind notice that the TDP Legislature Party in the Rajya Sabha consists of six members and no notice had been sent to the members with regard to the convening of the said meeting. Hence, it may be considered that no such meeting has been conducted."

In addition, the letter states that the four TDP MPs who joined the BJP party, have "no authority nor are they empowered to merger the TDP with the BJP".

After the meeting with the Vice President, TDP MP Jayadev Galla told, "Yesterday four Rajya Sabha members of TDP had given a letter saying that they are merging the legislature party in Rajya Sabha and since they have 2/3rd majority, it should be accepted without any disqualification. Having gone through the law what we now understand is, merger of a political party has to take place at only organisational level. It cannot take place at legislature party level. Since TDP & BJP have not merged at the organisational level this is not a legal merger."

YS Chowdary said, "CBI and ED have examined me for a case which belongs to a third party. These are not direct cases against me. I have never done any kind of fraud, forgery, cheating in my entire life. An investigation is going on, which can go against anyone, doesn't mean I have done something."