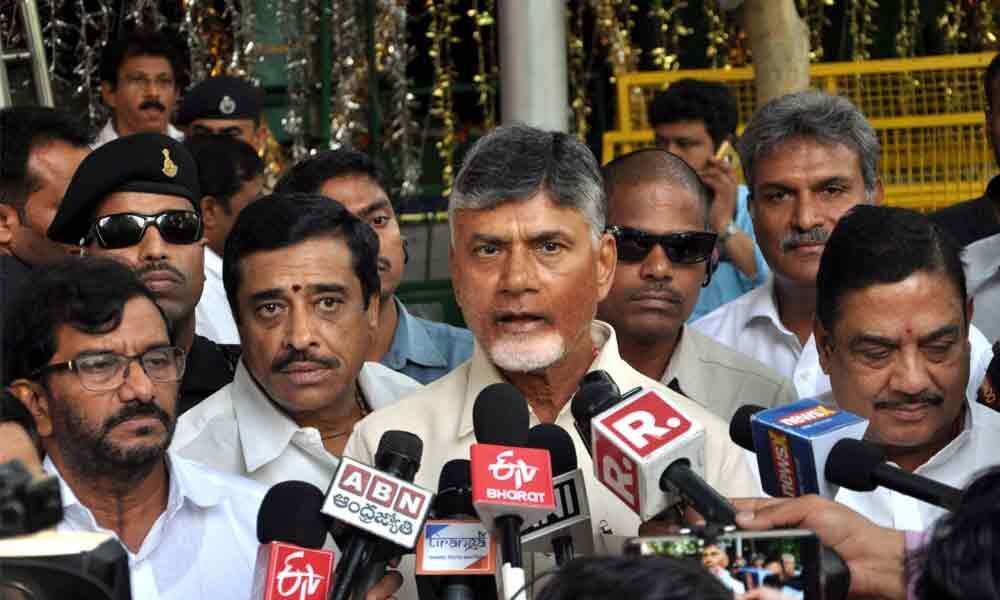 We have seen polling being conducted in different phases but have never come across re-polling also being held in phases —Chandrababu Naidu, Chief Minister of AP

New Delhi: Chief Minister N Chandrababu Naidu, who has been charging the Election Commission of India with taking unilateral decisions for some time now, on Friday met Chief Election Commissioner Sunil Arora and two other commissioners and questioned their propriety in ordering re-polling in five polling booths in Chandragiri constituency in Chittoor district almost 38 days after the polling was over.

It is understood that the EC after listening to the complaint of Naidu is examining the possibility of holding repoll in at least two other polling booths in this constituency.

Interestingly, earlier during the day, TDP leaders had met Chief Secretary LV Subramanyam and gave representation to him demanding repolling in 19 polling booths in Chandragiri constituency. Subramaniam forwarded the same to the CEO recommending that necessary action be taken.

On the other hand, Naidu, who rushed to Delhi on Friday, submitted a 10-page memorandum to the CEC and registered strong protest over the commission not taking cognizance of the complaints filed by TDP immediately after the election was over.

In his letter, Naidu wondered how the EC could conduct re-polling in phases. "The EC has already conducted re-polling in five other polling stations in three districts on May 6, based on certain complaints.

If there were any issues in the polling stations in Chandragiri assembly constituency, why didn't the Commission inquire into the same and conduct the re-polling on May 6," he asked.

He said it was ridiculous on the part of the EC to take cognizance of the fresh complaints of the YSRC and order re-polling. "We have seen polling being conducted in different phases but have never come across re-polling also being held in phases," he said.

Naidu wondered whether the EC will order re-polling in some other booths even after the declaration of results, if the YSRC leaders come up with fresh complaints.

To substantiate his charge of double standards adopted by the EC, Naidu said the commission had adopted two different actions regarding Andhra Pradesh and West Bengal.

Naidu further said, the fact that, ECI did not bother to take any action against Narendra Modi and Amit Shah despite repeated MCC violations is weakening the institutional integrity of the ECI and inherent strength of our great democracy.

The ECI's wilful inaction on the complaints made by the opposition parties against the BJP, Prime Minister Narendra Modi and BJP chief Amit Shah indicates arbitrary and one-sided actions in Andhra Pradesh and West Bengal in transferring the officials, conducting repolls, unilaterally banning the campaigning in West Bengal before scheduled time, and its selective action against leaders like Mayawati, while exonerating Narendra Modi for similar charges: clearly appear to have been done at the behest of BJP-led union government, he added.

The leaders of the BJP and its friendly parties are not touched by these agencies. No action is being taken by the leaders who are from BJP or support the BJP, is a vindication of the fact that the ECI, is compromising on its neutrality and impartiality, he alleged.