YS Jagan mohan will work for the welfare of society: YS Vijayamma 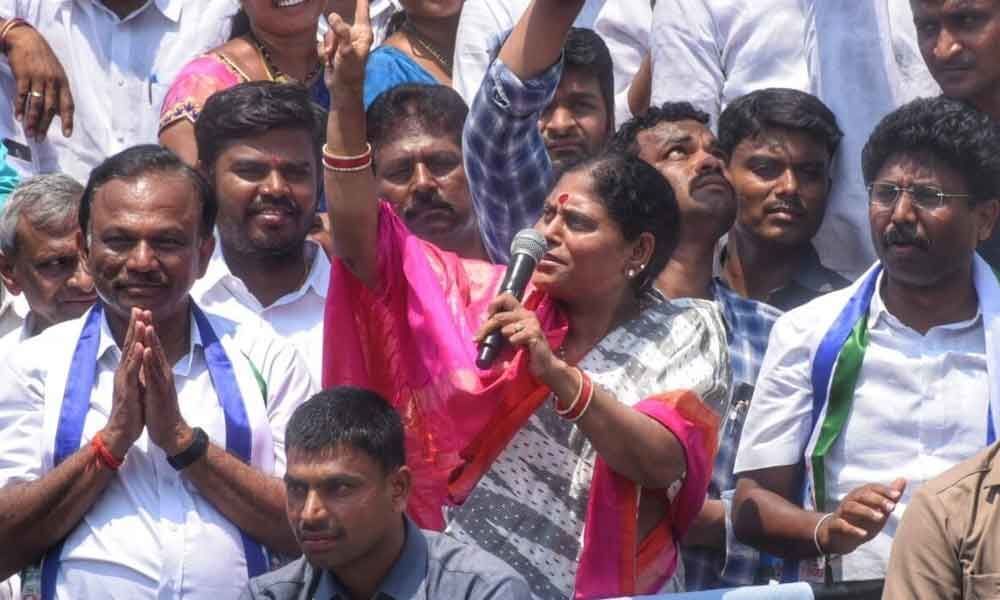 Yerragondapalem: The honorary president of the YSR Congress party, YS Vijayamma said that Jaganmohan Reddy is in public for the last nine years, fighting for the welfare of people as he believes that society is his family.

She campaigned for the YSRCP Ongole parliament constituency candidate MaguntaSrinivasulu Reddy and Yerragondapalem MLA candidate Adimulapu Suresh at Yerragondapalem on Saturday. Vijayamma said that the people were happy with the rule of YS Rajasekhara Reddy who had introduced several schemes.

She reminded that Rajasekhara Reddy introduced Arogyasri, 108, 104, fees reimbursement, four percent reservation for Muslims, loans for 25 paise interest and other schemes and said that he had gone for 2009 elections without a new promise. She said that Chandrababu Naidu made 650 plus promises but failed to fulfill them.

She said that though the chief minister visited the Prakasam district for 16 times, he didn't complete the Veligonda project in the five years, which was completed by 70 percent in the Rajasekhara Reddy time. She assured that Jaganmohan Reddy will address all issues.She explained that the YSRCP government will implement a ban on liquor in a phased manner and complete all irrigation projects under Jalayagnam.

People who are facing medical bills of over Rs 1000 for any disease will be treated free under Arogyasri and give new life to the 108 ambulances, she said. Their government will pay Rs 15,000 to the mothers for sending their children to school. They will fill the 2.40 lakh vacancies in the government and appoint 10 staff members at village secretariats to help for the implementation of the welfare schemes.

She promised that the YSRCP government will construct about 25 lakh houses in the five-year term for poor and register them on the women name for free. She said that they will pass a bill in the assembly to provide 75 percent of jobs in the industries to locals.