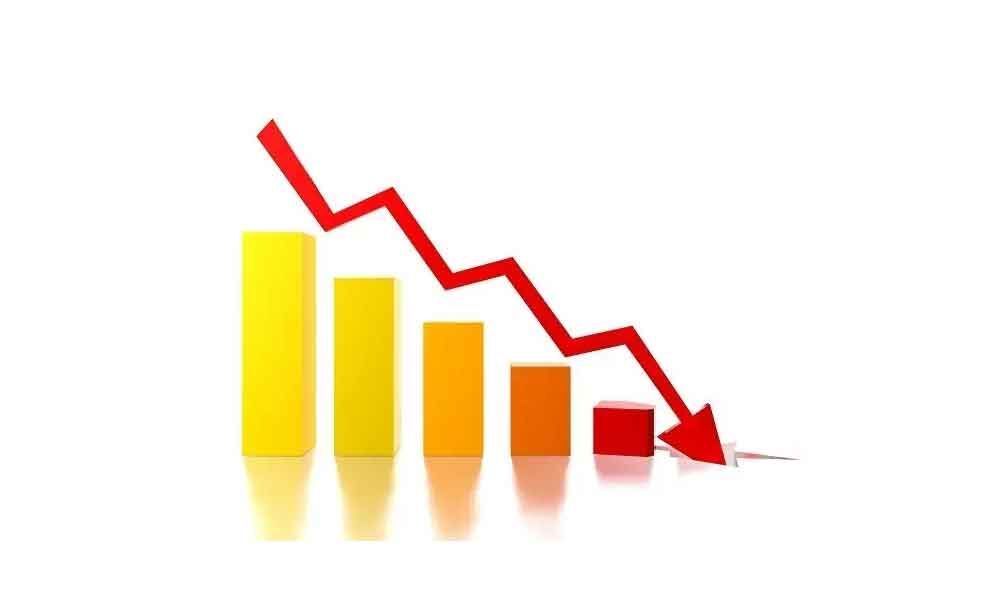 Mumbai: Benchmark indices Sensex and Nifty fell for the fifth session in a row on Tuesday, marking their longest losing streak in nearly three months, as US-China trade tiff and lukewarm corporate earnings stoked fears of uncertainty in markets.

Both equity gauges traded higher for better part of the session, only to give up gains towards the fag-end of trade, with the BSE Sensex closing 324 points lower and the NSE Nifty diving over 100 points.

Among other factors, depreciating rupee and weak global sentiment dampened the mood on domestic bourses.

The Sensex was mainly dragged by Tata Motors, ICICI Bank, Bharti Airtel and Reliance Industries -- shedding as much as 4.60 per cent.

The quarterly results of ICICI Bank and Bharti Airtel failed to attract investors and both the companies saw constant sell-offs during the session.

Indian bourses after starting the session on a high came under heavy selling pressure as domestic investors' sentiment took a beating after IMF chief Christine Lagarde said US-China tensions were a 'threat' to the world economy.

Global markets have been rattled by the concerns over the health of the world economy ever since US President Donald Trump on Sunday threatened to hike tariffs on $200 billion worth of Chinese goods.

Both Sensex and Nifty also marked its longest losing streak since February 19 this year.

"Indian market has been on a shaky ground for the past couple of days driven by ambiguity associated with the US-China trade negotiations and less-than-inspiring ongoing corporate earnings season," said JagannadhamThunuguntla, SVP and Head of Research (Wealth), Centrum Broking.

Sectorally, BSE telecom, energy, oil and gas, bankex, metal and realty indices took a beating, ending up to 2.44 per cent lower. In the broader market, BSE midcap and smallcap indices too ended in the red, dropping up to 0.98 per cent.

Shares of ICICI Bank fell by nearly 4 per cent Tuesday after the company's fourth quarter earnings failed to impress investors.

Private sector lender ICICI Bank on Monday posted a 2.45 per cent rise in its consolidated net profit to Rs 1,170 crore in the fourth quarter of 2018-19. Bharti Airtel stock also declined over 3 per cent post the announcement of March quarter results.

The company, whose profitability has been battered by intense price competition posed by richest Indian Mukesh Ambani's Reliance Jio, earned a net profit of Rs 107.2 crore in the January-March period as against Rs 82.9 crore it earned in the corresponding period of the previous fiscal.

The Indian rupee on Tuesday dropped 3 paise to close at 69.43 against the $ amid foreign fund outflows. In Asia, Chinese bourses, however, recovered with Shanghai Composite Index ending in the green. Equities in Japan and Korea closed in the red.

European stocks were also trading lower in early trade. The Indian rupee was trading flat at 69.39 against the $ intra-day. Global benchmark Brent crude was trading 0.74 per cent lower at $70.71 per barrel.