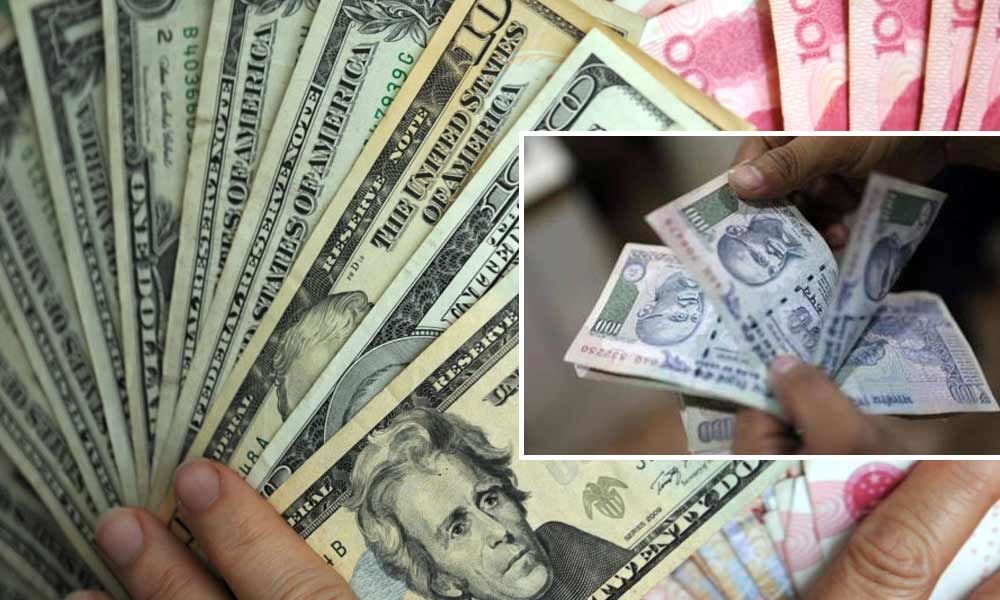 The rupee on Tuesday dropped sharply by 97 paise to more than nine-month low of 72.39 against the US dollar as heavy sell-off in the domestic equity market, weak macro environment and a stronger greenback kept investors edgy.

Mumbai: The rupee on Tuesday dropped sharply by 97 paise to more than nine-month low of 72.39 against the US dollar as heavy sell-off in the domestic equity market, weak macro environment and a stronger greenback kept investors edgy.

The Indian currency came under pressure after official data released on Friday showed that India's GDP growth fell to an over six-year low of 5 per cent in the June quarter. Besides, the growth of eight core industries dropped to 2.1 per cent in July, mainly due to contraction in coal, crude oil and natural gas production. The rupee opened lower at 72 to the US dollar at the interbank foreign exchange market and lost further ground to touch a low of 72.40 against the dollar. The domestic currency settled down by 97 paise at 72.39 per dollar, logging its worst single-day fall since August 5 and the lowest closing level since November 13, 2018. The forex market was closed on Monday on account of Ganesh Chaturthi.

In addition, IHS Markit India Manufacturing Purchasing Managers' Index (PMI) showed that the country's manufacturing sector activity declined to its 15-month low in August. "GDP data was lower than expected and was down for the fifth consecutive quarter. June quarter GDP grew at the slowest pace since March 2013. Monthly auto sales, eight-core infra data and PMI data also came in weak along with the GDP and weighed on the India Rupee," said V K Sharma, Head PCG & Capital Markets Strategy, HDFC Securities. Forex traders said a stronger dollar also dragged the rupee down. The dollar index, which gauges the greenback's strength against a basket of six currencies, inched up 0.36 per cent to 99.27.

"The dollar index climbed to the highest in more than two years as uncertainty over the planning of US-China trade talks' underpinned demand for the US currency," Sharma said. The lingering US-China trade war and Brexit fears dragged the domestic currency, even as crude oil prices eased. Angel Broking Research Analyst Vaqarjaved Khan said, "US-China trade war jitters and weak quarterly GDP data from India lead to this fall. "Rupee is likely to depreciate towards 73.5 by the end of September'19 if the trade war escalates further between the US and China and outflows from the Indian equity market continues." China on Monday said it had lodged a complaint against the US with the World Trade Organization (WTO), one day after new tariffs were imposed by Washington on billions of dollars of Chinese goods came into force.

"The Rupee, already under pressure from strong dollar amidst Brexit worries, received a major jolt as June quarter's GDP reading fell to 5 per cent. This was further exacerbated by dismal August auto sales even as markets gave a thumbs down to PSB mergers, thereby raising worries of further rupee selling, as the FII exodus from equities continues," Anand James, Chief Market Strategist at Geojit Financial Services, commented. Inflows are coming in the form of bonds, anticipating more rate cuts, but they remain less compared to the outflows, he added. Foreign funds pulled out USD 2.3 billion from local shares in August, the biggest outflow since October, Sharma said. Brent crude futures, the global oil benchmark, eased 1.55 per cent to USD 57.75 per barrel.