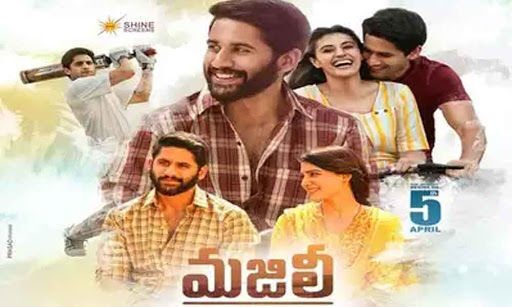 Tollywood star couple Samantha and Naga Chaitanya are all set to enthrall the audience with their outstanding chemistry in their upcoming movie together, 'Majili.' Shiva Nirvana of 'Ninnu Kori' Fame helmed this project. Naga Chaitanya whose previous outing 'Savyasachi' ended up as a debacle at the box office has pinned all his hopes on this film. Touted to be a romantic drama, the expectations have been sky high on this movie. The teaser and trailer of the film have received a thumping response from the audience. Amid high expectations, the movie has finally made it into the theatres today on April 5th, 2019. Let's check out the review of the film.

Poorna (Naga Chaitanya) wants to be a cricketer. He comes across Anshu (Divyansha Kaushik) and falls for her. When everything is going good, they get parted ways as Anshu's father is not willing to accept their relationship. Things become messy, and Poorna ends up marrying Sravani (Naga Chaitanya) but their marital life is not going smooth. Why is it so? Will Poorna ever change? How did they become close again? Forms the story of the film.

Naga Chaitanya blended well with the character and has delivered all the emotions perfectly well. Though he played the role of a college going guy in the first half, he has handled it effortlessly and gave a memorable performance. Samantha is stunning in this film. She got an exciting role in the movie and more than Samantha one can see the character she played in the film and will fall in love with that character. Divyansha Kaushik is pretty and promising in the film. She looked beautiful, and the fresh chemistry with Naga Chaitanya worked out well in the first half. Rao Ramesh steals the show with his performance. Posani Krishna Murali delivered his best. Other actors like Subbaraju, Suhas, Sudarshan also gave decent performances.

Director Shiva Nirvana has touched a sensitive point of love after marriage in this movie. He handled it maturely and emotionally. Every scene is handled beautifully and the story will leave a mark in the audience. Especially in the second half, the pure love between husband and wife is showcased in a mesmerizing way which will keep the audience stick to their chairs. Production values by Sahu Garapati and Harish Peddi are very high. Music by Gopi Sundar is excellent. A couple of his songs have already become chartbusters. More than anything, Thaman's BGM is mind-blowing. His background score gave more strength to the film. Vishnu Sarma's cinematography came out well. Prawin Pudi's editing is good.

The solid story can be considered as one of the major highlights of the film. Director took elements like comedy, friendship, love, romance, emotion, pain, sentiment in equal proportions and blended them to produce beautiful output. The performances delivered by Naga Chaitanya and Samantha can be considered as the major driving factors behind the film. The movie starts on a lighter note, and the entire first half will showcase the beautiful chemistry between Naga Chaitanya and Divyansha. When compared to the first half, the second half becomes a little bit dark and focuses more on the emotional elements. The emotional scenes between Samantha and Naga Chaitanya in the climax are heartwarming. On the whole, 'Majili' can be considered as must watch a movie and is going to be a blockbuster.