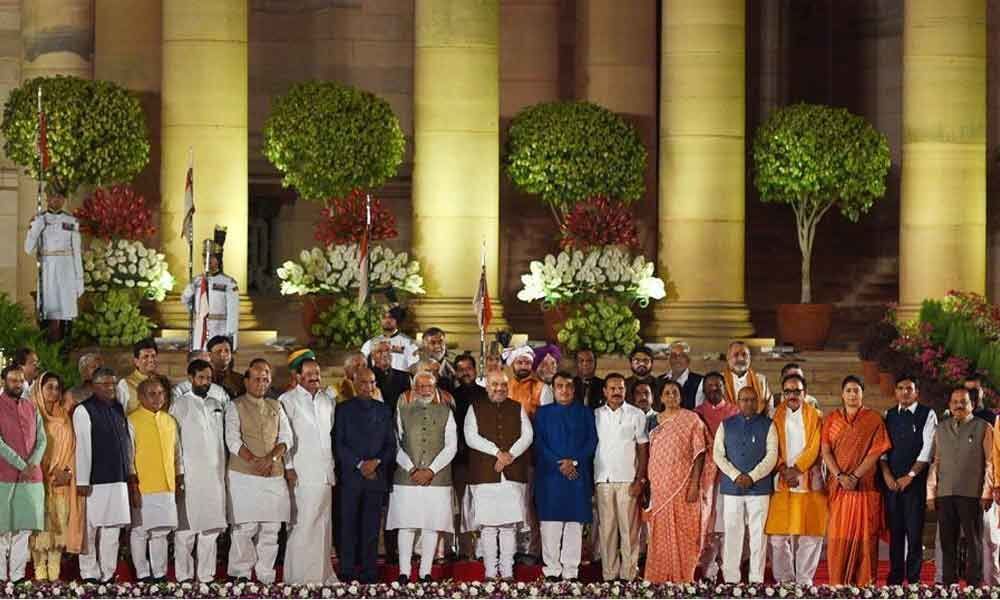 The evening crept up slowly. Different colours of light over the presidential palace.

The evening crept up slowly. Different colours of light over the presidential palace. After sitting in front of a historical architecture, the Prime Minister of India, Narendra Damodardas Modi, started his second innings. After he took oath, other ministers took oath one by one.

Whatever constitutes the cabinet, one thing is very clear: that it is Narendra Modi's cabinet. Narendra Modi is the supreme leader who decides the politics and administrative direction of the country.

He is hundred per cent competent. He has been inventing various kinds of observers and analysts in different ways. Some think that he is the rightist leader of the leader. Some people also believe that he is a very liberal leader, he has taken socialist programmes in many ways, keeping an eye on poor people.

Those social projects are the characteristics of a well-intentioned state. So Narendra Modi is a state hero, who has many types of shades, a variety of layers.

So what are the issues or the pre-condition that Modi is to choose from his ministers? Firstly, he wanted a working minister who can work at the same rhythm as him, who will be honest and whose image in public would be good.

Sushma Swaraj did not contest this election for health reasons, so, Modi made Rajnath Singh his Defence Minister. Amit Shah is Home Minister and S. Jayashankar his Minister for External Affairs.

The importance of the Ministry of Home Affairs and the Foreign Ministry is clear from the choice of person appointed as minister. Firstly, after the attack of Pulwama and Balakot, India's foreign policy will move fast.

Trade issues with the US will be settled through negotiations. Russia and France and other European countries also have to balance the relationship.

There should be some pressure to stop Pakistan's terrorist activities so that Imran Khan is forced to sit in talks. For such complex diplomacy, there was special need for a person like Jaishankar as Minister for External Affairs, there is no doubt about this.

Again, Amit Shah, the country's interior minister, has decided to eliminate Pakistan-backed Kashmiri militants or foreign terrorists. There is a guru-disciple relationship between Modi and Amit Shah.

This huge picture is quite significant today. Because Advani won from Gandhinagar, Amit Shah also came from that seat, and broke Advani's record for votes. Like Amit Shah, Advani was also the party's president.

I have seen Amit Shah at work even when his sugar level was high. He was running the poll campaign just after taking an insulin injection inside his chopper. He is a man of action.

His aim will be to start a dialogue on Article 370 and Article 35(A). The BJP is still small in the Rajya Sabha. So the Bill with Article 370 cannot be passed even now. Hence, Amit Shah will wait.

The character of terrorism in Kashmir has changed a lot. Hurriyat leaders are no longer relevant, but some of the youngest militant leaders have been formed in the Valley.

Rajnath Singh also tried to negotiate with them. Then there was a tie-up with the Mehbooba Mufti. The compromise no longer exists today. Amit Shah's initial strategy will be to control militancy.

So the combination of Jaishankar and Amit Shah is very important for Modi. One, a hardliner will go on the path of nationalism and the other will talk about world brotherhood. And the two will actually work for Narendra Modi.

In addition to this, Modi has kept his old team for the Railways, Transport, Information and Broadcasting, and Petroleum and Information Technology. As a result, Piyush Goyal, Ravi Shankar Prasad, Nitin Gadkari, Prakash Javadekar and Dharmendra Pradhan are all there.

There was no evidence of a rebellion from those who were excluded from the cabinet. Vajpayee had made Sikandar Bakht his foreign minister. But, he did not come to South Block for the first two-or-three days after becoming minister because he had not been made Finance Minister. Such a scenario is unimaginable in the time of Modi.

Yashwant Sinha, Arun Shourie, and Shatrughan Sinha have all been sidelined for their rebellion.

Many said that Modi is actually an autocrat. They also said that there is an undeclared emergency in the country and, as a result, there are no dissenting voices. But, millions of people in the country have incredible confidence in Modi.

If some people oppose Modi by attacking their own interests, they will be isolated. People will throw them in the dustbin. And so this is a new avatar of Narendra Modi.