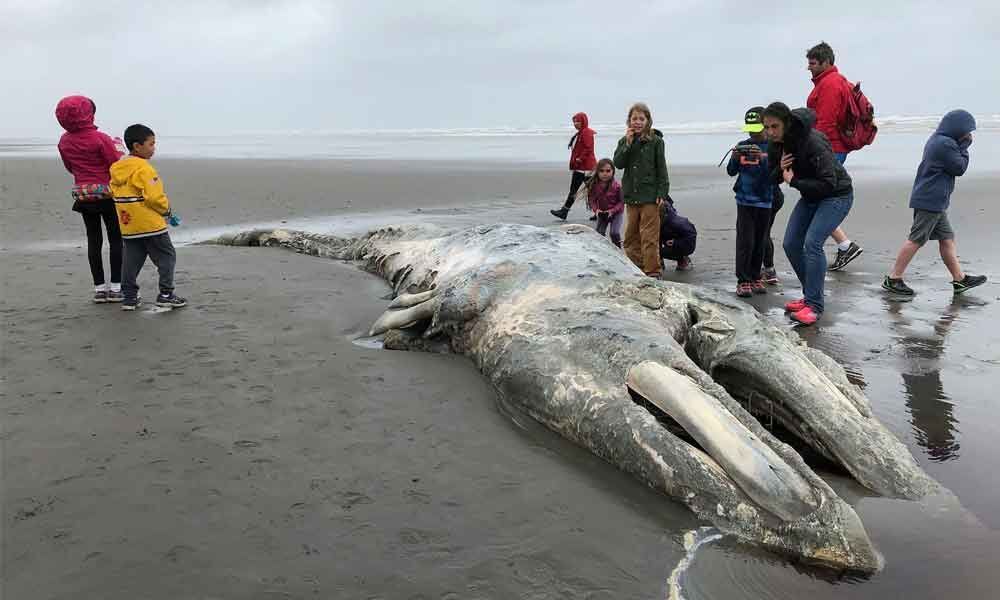 U S government biologists have launched a special investigation into the deaths of at least 70 gray whales washed ashore in recent months along the US...

U S government biologists have launched a special investigation into the deaths of at least 70 gray whales washed ashore in recent months along the US West Coast, from California to Alaska, many of them emaciated, according to officials.

The National Oceanic and Atmospheric Administration (NOAA) declared the whale die-off an "unusual mortality event," a designation that triggers greater scrutiny and allocation of more resources to determine the cause.

So far this year, 37 dead gray whales have turned up in California waters, three in Oregon, 25 in Washington state and five in Alaska, say officials of NOAA's National Marine Fisheries Service. Five more were found in British Columbia.

The most recent dead whale in Alaska was spotted last week near Chignik Bay on the Alaska peninsula.

Many have little body fat, leading experts to suspect the die-off is caused by declining food sources in the dramatically warming waters of the northern Bering Sea and Chukchi Sea off Alaska.

The gray whales summer there, consuming most of a year's worth of nourishment to pack on the blubber they need to carry them through the migration south to wintering grounds off Mexico and back north to feeding grounds off Alaska.

Sea ice has been at or near record lows in the Bering and Chukchi, and water temperatures have been persistently much higher than normal, an apparent consequence of human-caused climate change, scientists say.

The conditions the whales encountered last summer could be hurting the animals now as they make their annual migration north, said scientists assembled by NOAA for a teleconference on Friday.

"The Arctic is changing very, very quickly, and the whales are going to have to adjust to that," Sue Moore, a University of Washington oceanographer, told reporters.

Lack of sea ice may be reducing supplies of the tiny crustaceans known as amphipods that are the gray whales' prime food source, Moore said.

"The sea ice has been changing very quickly over the last decade or so," she said.

Another theory is that the number of whales has reached the limits of the environment's natural capacity to sustain further population growth, scientists said on the call.

The current estimated population of eastern North Pacific gray whales is about 27,000, the highest recorded by the agency since it began gray whale surveys in 1967, said biologist David Weller.

"Keep in mind that carrying capacity is not a hard ceiling, but that it's a shifting threshold," said Weller, who is with the agency's Southwest Fisheries Science Center in San Diego."In some years or period of years the environment is capable of supporting more whales than in other years."

The deaths could be caused by a combination of factors, as in other die-offs, the scientists said.

Some whales have detoured into places like San Francisco Bay and Puget Sound, where they face a greater risk of ship strikes and other hazards, said John Calambokidis, a biologist and gray whale expert with the Cascadia Research Collective.

"We are seeing lots of live gray whales in unusual areas, some of them clearly emaciated, trying to feed," he said.

More dead whales are expected to wash ashore during the northward migration, the scientists said. The total of dead whales documented probably represents a small fraction of those that have perished in the current episode, they said.

The last major West Coast gray whale die-off, in 1999 and 2000, was believed to have been related to an ocean-warming El Nino event. It also triggered an unusual mortality event declaration.