Brahmin welfare scheme in TS, a model for other States 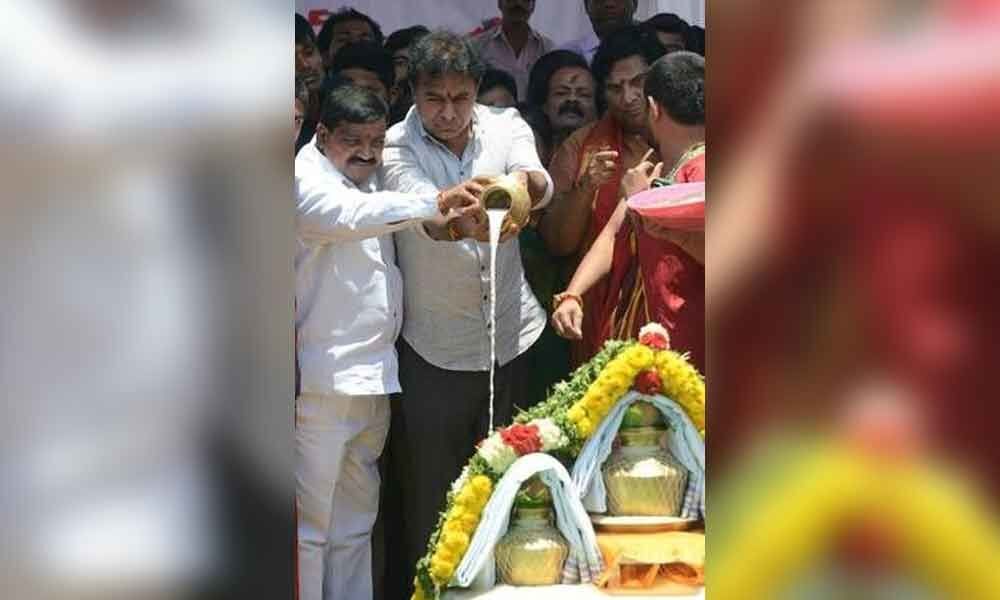 In a country like India, where Brahmins nurtured a culture that the world look up with great reverence and awe from time immemorial, ironically, things do not seem to be all hunky dory for the very initiators of this magnificent mores.

In a country like India, where Brahmins nurtured a culture that the world look up with great reverence and awe from time immemorial, ironically, things do not seem to be all hunky dory for the very initiators of this magnificent mores.

At a time when they are not getting their due share of respect and material support from the governments, Telangana State seems to be an exception.

The first ever Brahmin Welfare meeting anywhere in the country chaired by a Chief Minister of the State and attended by more than 80 from a cross section of the community was held on Sunday, 26th of October 2016 in Hyderabad.

Chandrasekhar Rao then suggested that a well-conceived strategy and comprehensive plan of action should be evolved for the overall wellbeing of Brahmins in Telangana State.

The meeting observed that the Brahmins primarily are engaged in the service to humanity, from helping the individuals to get over their day-to-day obstacles through offering Vedic remedies and performing rituals and ceremonies from birth to death.

They have been also rendering help to spread the ancient wisdom, spiritual teachings and imparting Vedic knowledge.

Chandrasekhar Rao's day's initiative ultimately led to constituting the Telangana Brahmin Samkshema Parishad in January 2017 under the chairmanship of former IAS officer and Advisor to the Government, K V Ramana Chary with 17 members for taking care of Brahmins' all-round development.

It was registered as society under Societies Registration Act for helping Brahmin Community through financial assistance in the fields of education, enterprise and culture etc.

The government since 2016-17 Budget so far allocated Rs 300 crore and released Rs 56.48 crore as per the requirement so far.

Besides construction of a Brahmin Sadan at Gopanapally in Hyderabad, for which the foundation was laid by the then IT Minister KT Rama Rao, the Parishad took up schemes like Sri Ramanuja, Vivekananda Oversees Education, grants to Vedapathashala, Sampradaya Vidyalaya, Honorarium to Vedic Scholars and students, Brahmin Entrepreneurial Scheme of Telangana etc.

Keeping in view the needs of Brahmin community in the State, the government has decided to construct a magnificent Brahmin Sadan at the State capital, Hyderabad. The government sanctioned an amount of Rs 20.025 crore for this purpose.

The construction work is in progress and out of 12 structures planned, three structures namely, Information Centre Block, Seers Accommodation Block and Toilet Block are almost completed. Brahmin Sadans are also coming up in a couple of districts with voluntary donation of lands.

This scheme is being implemented on par with similar scheme being implemented by the State government for other community students. So far, 144 students have been given financial assistance to a tune of Rs 38,53,248.

In order to help and encourage the Brahmin students who strongly aspire to pursue P G courses in foreign universities, Parishad introduced Vivekananda Overseas Education Scheme which is similar and on par with Ambedkar Overseas Vidya Nidhi Scheme being implemented for SC and ST students.

Applications for this scheme are received through online and beneficiaries are being selected through Selection Committee chaired by a committee consisting of Principal Secretary Endowments.

The Vedapathashala Scheme is in the form of one-time grant of maximum of Rs 2 lakh which will be extended to each of the Vedapathashala. To implement this scheme in a transparent manner, Parishad has constituted an internal committee with Parishad as members to which the applications received will be referred and upon their recommendation assistance will be provided.

Under this scheme so far, grant is extended to as many as 25 Vedapathashalas that included Vargal (Siddipet), Achalapuram (Adilabad), Mattapalli (Nalgonda) etc to a tune of Rs 45,50,000.

Financial assistance to a tune of Rs 3 lakh per annum would be given in the form of grant for running a school by Kanchi Kamakoti Peetham, imparting Sampradaya vidya besides regular education to the Brahmin girl students of BPL category studying from 7th to 10th class.

So far 30 girl students enrolled in this school, and Parishad extended financial assistance to a tune of Rs 6,00,000.

Under honorarium to Vedic Scholars Scheme, Rs 2500 is given to Pandits who are more than 75 years old. So far 34 pandits who are learned, qualified with scholastic ability in the Vedas and Shastras have been honored with a monthly honorarium of Rs 8,90,000.

These Pandits are selected by an internal committee. Under honorarium to Vedic students' scheme, stipend Rs 250 per month and sustenance grant of Rs 3,00,000 to Rs 5,00,000 after completion of course is being given to Vedic students. So far, 126 students have availed this stipend benefit to a tune of Rs 5,71,250.

Brahmin Entrepreneurial Scheme of Telangana (BEST) is meant for Brahmin entrepreneurs who belong to BPL category having an annual income below Rs 2 lakh in urban areas and Rs 1.5 lakh in rural areas. The unit cost under this scheme is fixed as Rs 1 lakhs to Rs 12 lakh in three slabs ranging from 80 percent subsidy to 60 percent.

The government directed that this scheme should be implemented on the pattern of other welfare departments. So far, 700 beneficiaries were selected for financial assistance to a tune of Rs 21,56,34,127 under this scheme. This like the rest of the schemes is an ongoing one.

As on date, a total of 2762 members were benefited through various schemes of Brahmin Parishad and the amount spent totals to about Rs 50 crore.

The imitative taken by Chandrashekar Rao had brought to light the true essence of Brahmins' existence and the need of the society to preserve and protect them for the larger interest of the society in general, country in particular.

The meeting chaired by him in October 2016 paved way for their welfare and for drawing a strategy for it. It also led to encouragement to Vedic studies, financial assistance to spiritual thinkers, provision for education, skill development, encouragement to entrepreneurs etc.

The complex that is being planned in Hyderabad will be a platform for development of Brahmin community and provides for a traditional accommodation to Peetaadhipathis and scholars coming from outside. This is in way an all-round development plan of the Brahmin community.

Telangana Brahmin welfare is now a role model to other States. Welfare of this nature of Brahmins will be bliss to the Supreme Being.