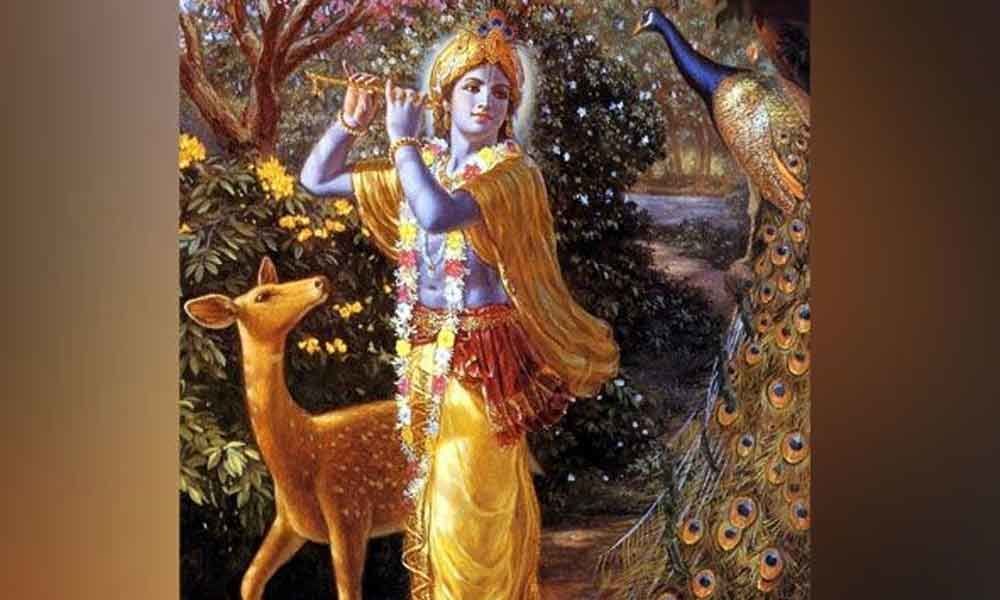 India has long been known for its 'Ganga-Jamuni tahzeeb' or the syncretic culture, where diverse religions, especially Hindus and Muslims, live in harmony to create a unique culture.

India has long been known for its 'Ganga-Jamuni tahzeeb' or the syncretic culture, where diverse religions, especially Hindus and Muslims, live in harmony to create a unique culture.

Literary works of various artists reflect this syncretism and fusion of monotheism and polytheism.

As we celebrate Janmashtami- the birthday of Lord Krishna, let's know the importance Blue God holds in Urdu literature by some Muslim poets.

Love, whether it is for the creator - 'Ishq e Haqeeqi' or for its creation - 'Ishq e Majazi' has no affiliation. It is a strong attraction that takes you closer to your beloved. And what better can describe the expression of love than beautiful words loaded with emotions in the form of poetry.

"Krishna happened to be one of the favourite personalities for poets for centuries. Several ancient poets dedicated a collection of dohas to Krishna," says Jauhar Kanpuri, a noted Urdu poet.

Under the Chishti Sufi saints, a new genre of literature called 'Premakhya' was developed in line with the Persian Mathnavi tradition. It talked about the Sufi philosophy of "Ishq e Haqeeqi" (love for the divine).

"The literature was written in Awadhi and aimed at the local populace and drew from local imagery and folklore plus devotion and asceticism. Not surprising, Krishna became a popular figure in this literature.

In the medieval period, Amir Khusrau (1253-1325), a great Sufi poet and an early architect of India's composite culture mentions the birthplace (Gokul) of Krishna, in the verses of his famous qawwali 'Rang.'

"Urdu poetry on Krishna is believed to be as old as the language itself, i.e 12th century when Urdu came into existence," says Kanpuri.

Urdu poetry has a special place for Krishna and he is often described as a child, a brother, a charioteer, a warrior, a disciple, a guru, a cowherd, a messenger, and the beloved of the Gopis.

Not only is he a metaphor of beauty but also a figure that should be respected and revered. "Poetry in praise of Krishna, centres on his playful activities with the Gopis, the cowherd girls among whom he spent his youth," Kanpuri adds.

A prominent personality, Wajid Ali Shah (1822-1887), Nawab of Awadh, was also a lover of Krishna. "He displayed his devotion towards the God in the form of plays based on 'Raas-Leela' where he would portray Krishna," Safvi explains.

"Maulana Hasrat Mohani, a practising Muslim who went for the Hajj numerous times, was an ardent lover of Krishna whom he called Hazrat Shri Krishan ji Maharaj," informs Rakhshanda Jalil, a literary historian.

Eulogising Krishna and expressing his regret at not being at Mathura on one of the Janmashtamis, Mohani writes: Hasrat ki bhi qubool ho Mathura mein haziri, Sunte hain aashiqon pe tumhara karam hai khaas (May that you accept Hasrat too at Mathura; I hear you are especially kind to lovers).

Another noted poet Hafeez Jalandhari (1900-1982) who moved to Lahore following the partition is not only famous for composing the national anthem of Pakistan, the Qaumi Taranah, but also for his precious Urdu poem 'Krishn Kanhaiya.'

The poem describes Krishna's glory, his romance and playing with Gopis, a humiliation in Kaurava court (cheer-haran episode in Mahabharata) and preparation for war- Mahabharata.

And the sound of Krishna's flute as "nasha hai na mai hai / kuchh aur hi shai hai" (neither intoxication nor wine / it's something beyond).

Not only has the poet beautifully penned the beauty, playful nature of Krishna but also a symbol of strength and power.

While Krishna was a source of inspiration for many Muslim poets, He indeed bridged the cultural and religious gap with observant Muslims singing praise for the lord.

Krishna is immortal and His devotees will always find a way to praise their beloved God.

Brought up in Awadh, Rana is one of the Muslim devotees of Krishna who speak fondly of Him in her work on syncretism.

"For me Lord Krishna symbolises love," a love that transcends all boundaries, blurs all divides.Toprit