India promotes Hindu pilgrimage as sign of peace in Kashmir 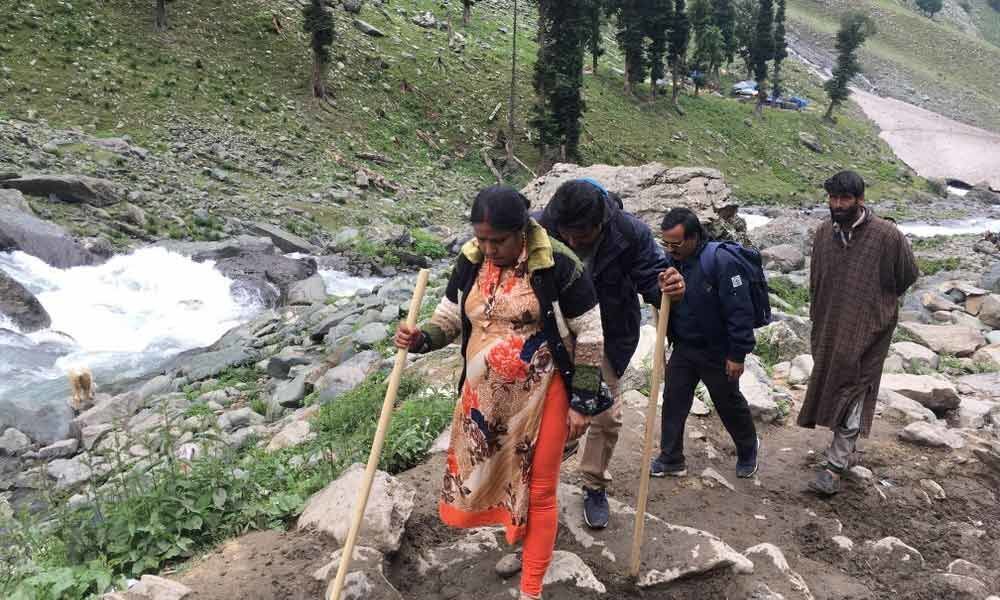 India is pitching a Hindu pilgrimage to a snowy cave shrine in disputed, Muslim-majority Kashmir as evidence of peace in a state marred by decades of armed conflict amid popular resistance to Indian rule.

PAHALGAM: India is pitching a Hindu pilgrimage to a snowy cave shrine in disputed, Muslim-majority Kashmir as evidence of peace in a state marred by decades of armed conflict amid popular resistance to Indian rule.

The annual yatra, or spiritual journey, to the Amarnath shrine, the hallowed mountain cave where devotees revere an icy stalagmite as an image of Lord Shiva, presents an opportunity for the state of Jammu and Kashmir to show something beyond the frequent skirmishes between armed separatists and Indian soldiers that have cost tens of thousands of lives.

"We're always in the news for the wrong reasons," said Khalid Jahangir, deputy commissioner of Anantnag, the district in Kashmir where the yatra takes place.

"There are some minuses, also some pluses," Jahangir said, adding that "whatever little (pluses) there are must also be projected," pointing to a photograph of four local men carrying a heavyset pilgrim in a palanquin as an example of communal harmony.

The pilgrims, many of them barefooted ascetics, chant hymns and ring bells as they travel through forested areas in Kashmir's Himalayas. The worshippers approach the shrine through two routes, a traditional one via the southern hill resort of Pahalgam and a shorter one through northeastern Baltal. Some also use helicopter services to pay quick obeisance.

The Amarnath cave is covered with snow most of the year except for a short period in summer when it is open for the pilgrims.

The state, run by a governor appointed by India's Hindu nationalist-led central government, has spent huge sums on an advertising campaign, including ads in two of India's highest circulation dailies, and on security. Some 40,000 security personnel were deployed to protect pilgrims who have been repeatedly targeted by militant groups, most recently in 2017, when seven were killed as their bus was attacked leaving the shrine area.

India accuses Pakistan of arming and training insurgents who have been fighting since 1989 for Kashmir's independence from India or its merger with Pakistan. Islamabad denies the charge. About 70,000 people have been killed in the uprising and the ensuing Indian crackdown.

India and Pakistan have fought two wars over Kashmir, the Himalayan territory they both claim and which is divided between them, and came near to a third after a suicide-bomb attack by a homegrown militant allied with a Pakistan-based extremist group on an Indian paramilitary convoy not far from the pilgrimage route.

Most recently, New Delhi denied President Donald Trump's recent claim that Modi had asked him to act as a mediator for Kashmir.

"It has been India's consistent position that all outstanding issues with Pakistan are discussed only bilaterally," foreign ministry spokesman Raveesh Kumar said.

Every year, the state shells out about 50 crore, $7.2 million, to support the pilgrims on the at-times treacherous trek to the 3,888-meter (13,000-foot) -high shrine, escorting busloads of people from the nearest airports in armed convoys and posting medical services nearly every mile (2 kilometers) of the footpath. Since the yatra began July 1, more than 300,000 pilgrims have attempted the trek. Two dozen people have died of cardiac arrest and more than 80,000 have been medically treated.

Pilgrims also leave heaps of waste in their wake — up to 15 metric tons (about 33,000 pounds) each day — that require disposal.

Officials justify the expense as a boon for the local economy. More than 30,000 local Kashmiris rent tents, sell warm-weather gear and walking sticks, and provide transport in the form of ponies and palanquins, or commercial chopper flights, up to the shrine, according to Anup Kumar Soni, additional chief executive of the Shri Amarnathji Shrine Board.

"If there is no Kashmiri, there is no yatra," said Mohamed Ishaq Khan, a local who has been renting tents to pilgrims for 30 years, at the Nunwan base camp in Pahalgam, where the traditional three-day trek to the shrine begins.

Conversely, the people who live in the rugged Pahalgam Valley rely upon the pilgrims for their livelihood, Khan said, arguing for a government pension to maintain locals' support.

"So that my son will also work in the yatra," he said.

Modi's government sees the potentially lucrative side of Hindu pilgrimages. It has spent handsomely on the Hindu mega-fest Kumbh Mela in January and to build an amenity-laden corridor linking the Ganges River with an important Hindu temple in the city of Varanasi.

Jammu and Kashmir Gov. Satya Pal Malik, appointed by the president of India nearly a year ago, says that despite the beefed-up security for the yatra, the violence in the Kashmir Valley has been exaggerated.

"Tempers have cooled," he said. "In Delhi, the press has demonized Kashmir."