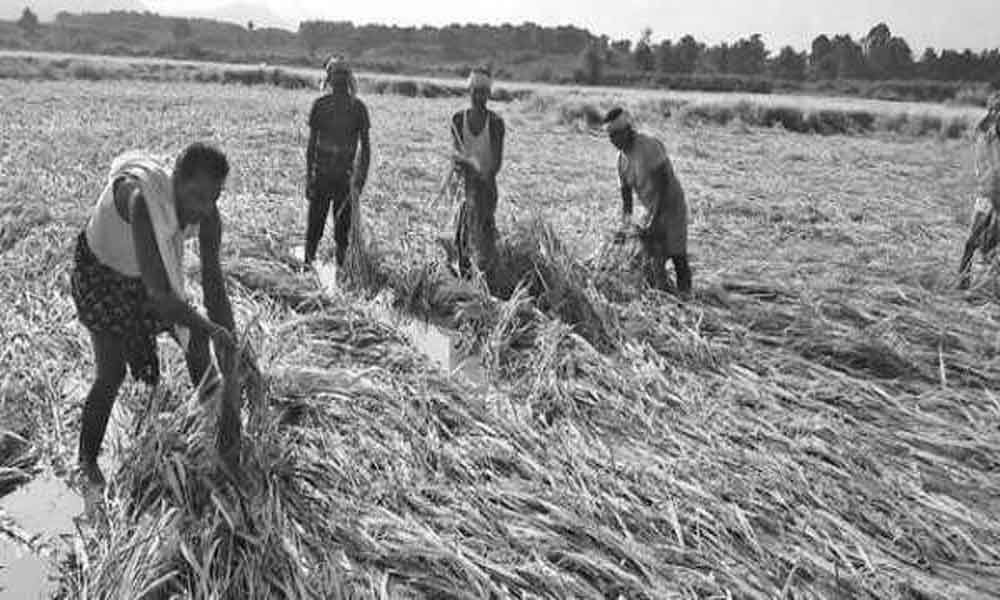 Vikarabad: City-based 12-years-old Valmiki Foundation on Sunday donated sewing machines, school bags, sports kits, notebooks worth Rs 6 lakh to the families of farmers, who committed suicides in Dharur, near Vikarabad, 50 km away from the State capital. They all hail from tribal villages.

Film and TV star Anasuya Bharadwaj, who was the chief guest, handed over the doles to the families at a function held in Dharur on Sunday. Harish Kumar Gupta, Additional DGP, Andhra Pradesh and others participated. Speaking on the occasion, Anasuya exhorted the bereaved families to remain bold and face difficult situations. "Suicide is not the solution to the problems", she added.

A Kisan Mitra volunteer of Vikarabad, who spoke on the occasion, said in the last five years, some 4,200 farmers committed suicide in Telangana. But, the State government recognized only 1,200 due to various reasons. What about 3,000 farmers who committed suicides and their bereaved families, he wondered. "No government would ever like to recognise that people are committing suicides. That is why Kisan Mithra helpline was started in Vikarabad district to help farmers to cope with their depression", he said. He also lauded the Valmiki Foundation for coming forward to help the families of those farmers who committed suicides.

Around 40 sewing machines, school books, bicycles and cricket kits were distributed to the tribal villagers and orphan kids at a function held at the Sacred Space in Dharur on the eve of 12th anniversary of Valmiki Foundation. It was jointly organized by Valmiki Foundation, Sacred Spaces Rythu Nestham. Over 300 villagers, Valmiki Foundation volunteers, and children participated in the function. President and secretary of Valmiki Foundation Ganesh and Kishan said that their organisation reached out to nearly 50,000 kids till now and they were . aiming to reach out to one lakh children. "We want to set up a Gurukulam School on a five-acre land with a project outlay of Rs 3 crore. We are scouting for the place. We want to provide value based and quality education with all round development of the personality, informed Ganesh Valmiki.

Valmiki Foundation is also setting up a tailoring training centre at Sacred Space was founded by Nayanthara for the empowerment of rural women and till now, it imparted training to 30 family members of those farmers who committed suicide in tailoring and embroidery of farmers.