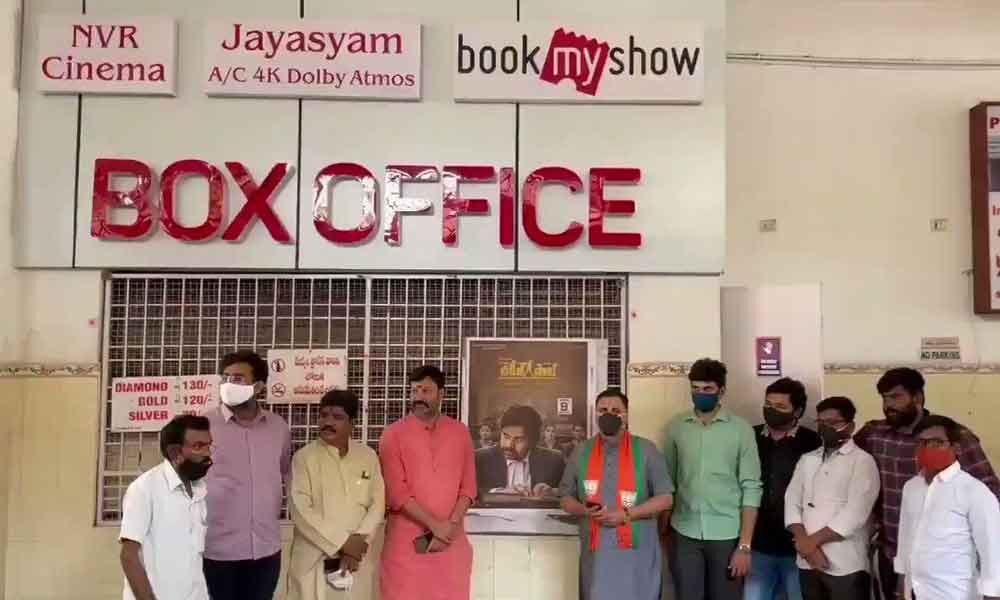 Tirupati : Irrespective of the Tirupati Lok Sabha bypoll prospects of the BJP and the Jana Sena Party, Pawan Kalyan has emerged a winner in getting wide publicity for his new movie from political leaders.

Ratna Prabha, a retired Indian Administrative Service (IAS) officer and former Karnataka chief secretary, has already issued a statement that Kalyan's movie is releasing this Friday and she is sure it would be a 'superhit'.

A few days ago, she said, "Watched the movie trailer with my kids/Pawan Kalyan fans. What an exciting trailer! Looking forward to see the chronicles."

Benefit shows are additional screenings of new movies outside the usual exhibition hours to cater to larger crowds and a revenue maximising technique. This means there would be more than four movie screenings per day.

In normal times, benefit shows are common in the Telugu states. "I came to watch Pawan Kalyan's movie. It is unfortunate on part of Y S Jagan Mohan Reddy that he is so scared of Pawan Kalyan that he banned all his benefit shows this morning," said Deodhar.

Lacing a political message, the BJP leader claimed that if Jagan is 'scared' of the release of Kalyan's cinema, then what will happen to him in the state when the real political movie of Narendra Modi and Kalyan as well as the BJP and Jana Sena releases everywhere in the state against his alleged barbarism, rowdyism, family, corrupt politics, forceful religious conversions, among others.

He claimed that he told Ratna Prabha that the moment the movie releases it will be a 'superhit' and her victory in the bypoll would also be declared along with it.

Deodhar also promoted Kalyan's movie during the recent public meeting in Tirupati where the actor-turned-politician gave a speech.